Having also just been down the Berger, I think the rigging was generally great and having it all rigged on what will be fairly bombproof threads instead of naff old spits made it feel way way safer (and you don't have to spanner anything up...).

The holes all looked pretty big - probably 12mm (possibly 10mm). It wasn't really 'lightweight' use of dyneema since they used doubled loops and karabiners. Basically you take a lot of pretied loops of dyneema and poke an end through the holes. I'm told that, as long as you don't overdrill the holes, you don't normally need a hook/Abakalov threading tool to poke the loop through even for the V-threads. Then larks-foot it and clip to the carabiner. Shorten the dyneema loop if necessary. Then, for a Y-hang, repeat for another thread and clip into the same carabiner (if you can make the lengths work) and use a bowline on the bight for the rope. Or a normal rope Y hang if not.

Also the dyneema will be removed when the cave is derigged. Just means you need ~150??? dyneema loops instead of 150??? hangers and bolts.

I thought it was great
F

Dyneema is harder than ice and will self-smooth any edges - that is not the case with rock.

Also, more prosaically, is the intent to leave the cord in for general use, or does everyone discard whatever they find and replace with their own (which they then recover)? I am not rigging a big pitch on someone else's 5mm dyneema. This is not the same as a drilled thread you can get a 10mm rope through without a tool.

Unless you leave a cord in it, how would you find it in most situations in a shaft? If you leave a cord in it, I am not going to use it for anything but a deviation. If I have to replace it to use it I am going to recover mine, and prob not get fussed about replacing the old one if I feel it looked dodgy to start with. Very often you would have to cut it to replace it anyway.

Unless you want seriously reduced strength you have to double the cord to place the knot under half the load.

Unlike canyons, you don’t get big rocks bouncing off bolts in the winter in any caves I go down. There is thus no issue with leaving rings or hangers in place.

The FFS Berger team have decided this works for them in a specific situation to avoid placing prob 100 bolts. Up to them. They are also rigging a cave for weeks at a time for hundreds of trips. Time spent on the rigging is of little importance. I cannot see me placing 30 of these for a sport trip.

If I was pushing a deep cave I have no doubt it would be with stainless 8mm studs. Takes about a minute to get one in and they last for decades and are highly reliable in normal limestone. If you overdrill a bit it can be easily hammered flush later. They are not expensive. Self evidently you need less battery power.

I also went down the Berger last week (I think it was the day after you, IanP). My take-home was that the rigging was done for a balance of longevity and ease-of-use. If it was rigged for ease-of-use on the traverses it would be totally fucked by the end of the first week.

As for the threads, I think it's simply a case of making it future-proof. They don't want to spend time and effort on checking and replacing spits every year. I'm not sure why they're averse to simply P-bolting the place though, maybe that would make the Berger a bit too "sport" for them? I do note that even though there were significant signs of wear on some of the ropes, none of the dyneema looked particularly distressed by the threads, and I was checking most anchors on my way past, due to finding an undone karabiner on the 2nd pitch, giving me paranoia for the rest of the rigging!

The way it's now rigged makes me doubt that they will even let other rigging teams down there in the future? Or at least they'll have to inform teams of the dyneema required to rig the cave. Switching over to dyneema seems to imply they're totally giving up on maintaining the vast majority of spit placements down there, so I don't see why they'd maintain them for other people to use for their own rigging trips.

I spotted the "furry" rope on Hurricane pitch on the way down and back out, we were the front group of the team of 20+ SUSS members heading down. We informed all teams of the wear on the rope, but by the time the third team had reached it on their return journey the rope had been de-sheathed. It was isolated and passed with care, no further SUSS trips made it beyond that particular re-belay until it was replaced. It was "impressive" to see how quickly the rope went from 'Oh, there's a bit of wear on that rub point' to 'Oh f***, the rope is torn'! Must have been maybe 6-8 people passing it in both directions before the rope finally went.

As for the repair job on the rope, what can I say? SUSS will be singing songs and telling tales of Édouard "The Rocket" for decades to come. We were informed that the repair job was in hand when we got back to camp, then when the next SUSS group exited the cave they told us they had been passed at Camp 1 by a single Frenchman running full tilt down the cave, whilst playing a Dance Remix of Captain Jack Sparrow's theme from Pirates of The Caribbean. Several groups emerged after having this encounter, which meant it wasn't simply a hallucination due to exhaustion. Édouard "The Rocket" had set off down the cave on his own, rope in hand, and completed a trip down to replace a re-belay on Hurricane pitch at -1000m in 5hr20m, entrance to entrance, all whilst blasting an EDM remix of the Pirates of the Caribbean theme on a loop the entire time! He would have made sub-5hr if he hadn't had to wait for SUSS members on Aldo's/Garby's pitches.
F

Some of the caves at the UIS conference had interesting rigs. A tad casual on abrasion I thought. Whatever.

But the extensive via feratta all over the Vaux cave (includes wire tightrope over terrifying puddle) had comedic value, and the grappling hook left at the end of the last flat out crawl seemed to be in keeping with the main theme. 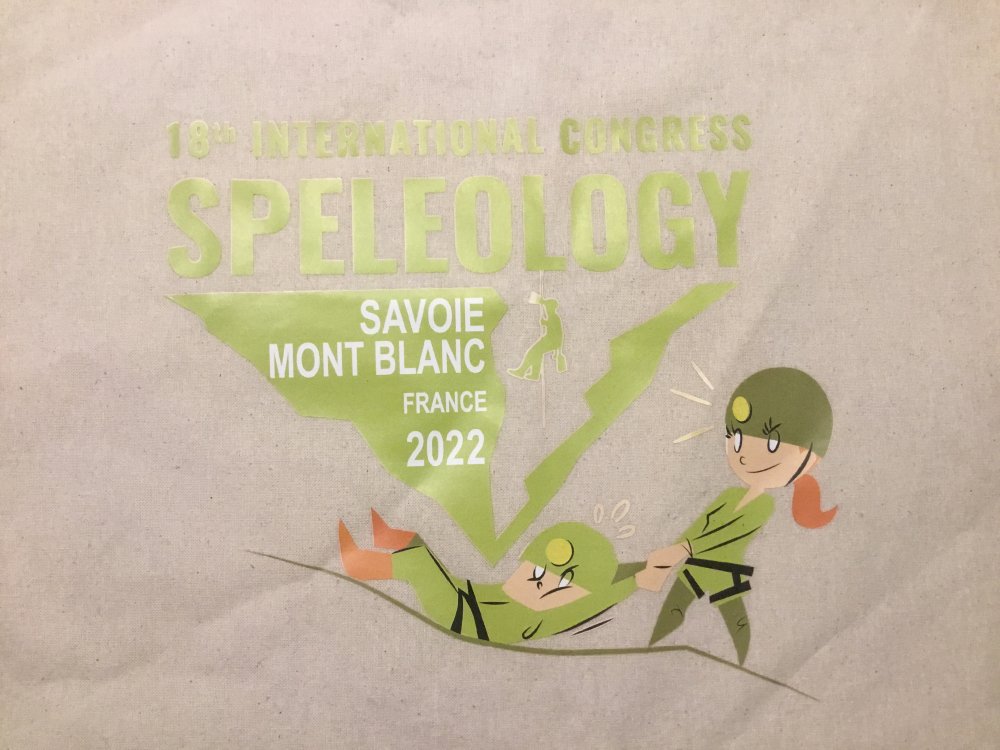 A_Northerner said:
It was "impressive" to see how quickly the rope went from 'Oh, there's a bit of wear on that rub point' to 'Oh f***, the rope is torn'! Must have been maybe 6-8 people passing it in both directions before the rope finally went.
Click to expand...

That is consistent with a similar wear observation in a rope which cored in just 12 uses on Bitch Pitch in JH mine in Derbyshire (see Descent 227 p23 August 2012). Oh and remember to only use an Alpine Butterfly knot to isolate the damaged section (see Descent 274 p16 June 2020).

Bob Mehew said:
Oh and remember to only use an Alpine Butterfly knot to isolate the damaged section (see Descent 274 p16 June 2020).
Click to expand...

Isolated on an alpine and thankfully only on a 3m section of pitch, after a traverse and above the final hang, meaning that it could be passed in either direction with relative ease. However high enough off the deck that a fall due to a break in the rope would have resulted in a near certain fatality - if not due to the fall itself, due to being immobilised in the draughtiest, wettest part of the cave.

There were quite a few resin-bolted caves in the Vercors and in the Savoie region (all Petzl anchors I think). I suspect they didn't want to resin anchor the Berger because of some combination of a) it would be a massive effort, b) it would probably cost a lot (the dyneema is removed at de-rigging time), c) dyneema is more fun

I'm not exactly sure who 'they' are, either (the access is controlled by the town hall but I don't know which caving groups have the most influence in the Berger). I know there are groups actively involved in exploration in the Berger who rig it regularly-ish; they also came down (with our permission) during our permit time (SWCC, just before the clean-up camp - the camp rigged the cave for us in the first two days). They were pushing something big and exciting above the Grande Cascade...
You must log in or register to reply here.
Share:
Facebook Twitter Reddit Pinterest Tumblr WhatsApp Email Share Link