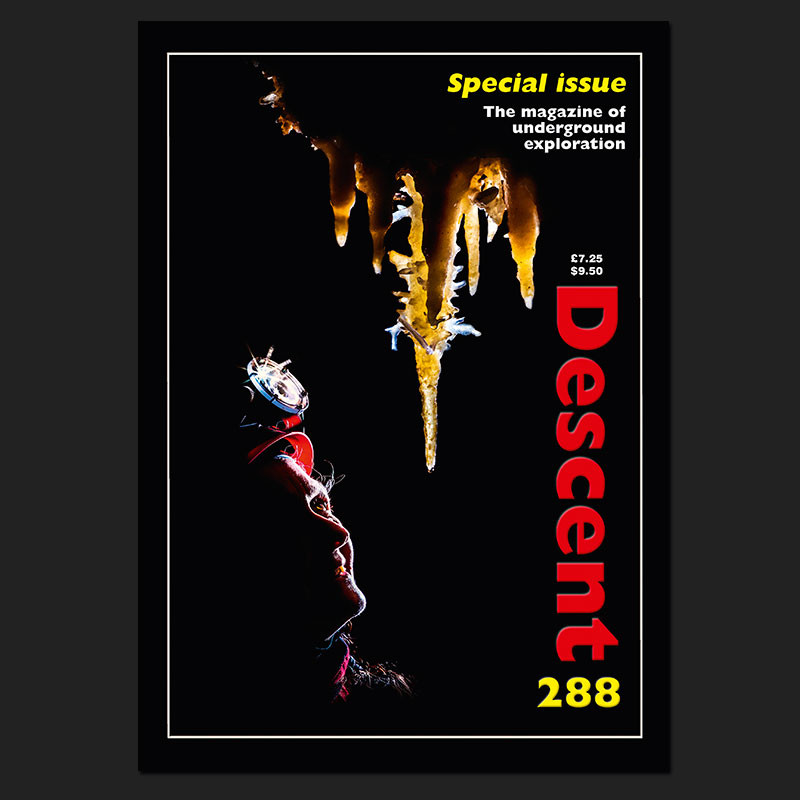 Rumour has it that Descent magazine has new editors. Good luck guys.....
Last edited by a moderator: Sep 29, 2022

All the best to Chris and Judith - and welcome to the new editors, Chris Scaife and Carolina Smith - congratulations!
Last edited: Sep 29, 2022

That's a superb front cover, and massive thanks to Chris and Judith for all their work over the years.

I wonder if with new editors comes new ideas around how to get people access to Descent outside of paper copies (desperately hoping for an online subscription - cancelled all my paper magazine subscriptions a long time ago).
I

Actually JoshW that reminds me to renew my paper subscription!

Well done Chris and Carol, having read most of Chris's articles I think the new version will be just as good if not better than the old. I second Josh with giving a big thanks to the previous editors/publishes, Chris and Judith.

Congratulations to Chris and Judith for running such a great publication for such a long time. And Good luck to Chris and Carol for taking up the reins, looking forward to the future editions.

JoshW said:
That's a superb front cover, and massive thanks to Chris and Judith for all their work over the years.

I wonder if with new editors comes new ideas around how to get people access to Descent outside of paper copies (desperately hoping for an online subscription - cancelled all my paper magazine subscriptions a long time ago).
Click to expand...

Yes, congrats to Chris and Judith for managing to keep a paper magazine interesting and relavent in this age of on-line access. And I second the comments about Chris Scaife's articles.

I guess that depends on which service you’d use, there’s various models available with it. Just can’t imagine I’m the only one who would subscribe if there was a digital option but with a paper option I’ll just wait til next time I’m in a caving hut!

To echo the above, gratitude is greatly due to Judith and Chris who have produced an absolutely first-rate publication for as long as I have been involved in caving (and significantly longer than that). They have always been so kind, helpful, encouraging, and have really done us proud in their presentation of all articles we have sent their way. The fruits of their labour will be on caving library shelves for decades to come.

Good luck to Chris and Carolina, I think Descent is in good hands here, having read Chris' articles and book.

I do feel that a change in the format or content of Descent is needed to reinvigorate interest with those who do not currently read Descent. It would be really interesting to see the statistics, and how sales have trended over the last few decades; I fear downwards as the cost of a producing paper copies have increased and as digital media has proliferated.

Nonetheless I do still feel there is a place for a paper-published caving magazine, and enough people who prefer that format (myself included). Kay has raised an extremely relevant point about a subscription model, and of course, digital media can, and will, become lost over decades, whereas a paper magazine will survive far longer in our libraries.

I have wondered whether a much smaller monthly publication would be of greater interest, at lower cost. Scale back the newsdesk and regional news sections, book and equipment reviews, as this kind of content is better dealt with via social media (plus, by the time these things often appear in Descent, they have been out on social media for several weeks so it is old news). Descent should adopt a social media presence and following for publishing such things, which will help build the 'brand' and generate more interest in the main revenue-generating publication.

The main publication should focus on stories of new exploration, or those most relevant to British caving, which are much better conveyed in a dedicated publication than on social media (social media stories tend to need to be short and snappy). A smaller monthly publication would enable any smaller articles and news items to be more timely and topical, rather than being old news by the time it appears in print.

I do think some kind of digital subscription option (in parallel to paper copies) would draw a separate, maybe new audience.

We will continue to subscribe to Descent regardless of whether it changes or stays the same, because it is an integral part of British caving literature, and the time and effort that goes into producing this should be rewarded. However, I wonder whether for it to establish a new audience, and compete with online media (or even take advantage of online media), some format adaptation could be beneficial.

Really excited to see what Chris and Carolina have planned, and of course to receiving the next issue.
I

Descent the well known magazine with sales to circulation of 1:100

Thank you, Chris & Judith, for outstanding service to the caving community for a great many years! Good luck Chris & Carolina on your new venture. I'll certainly do what I can to support you as long as Descent continues as a proper physical magazine.
You must log in or register to reply here.
Share:
Facebook Twitter Reddit Pinterest Tumblr WhatsApp Email Share Link