Gilbert Bohec has informed me that the Dent de Crolles system now has a thirteenth entrance - le nid de Choucas (The Jackdaw's Nest).

It is well named as it is located high in the eastern face. It was discovered from below by scaling in the Grotte Chevalier.  The photograph, taken by Gilbert from his house, has a red cross marking the new entrance. You can see the Annette and Chevalier entrances marked at the top of the grassy terrace towards the left.

I think I would have got vertigo if I had stuck my head out of there...

It's always struck me as a happy quirk of nature that the other entrances are conveniently situated at the base of the cliff, rather than halfway up it.

Andy Sparrow said:
It's always struck me as a happy quirk of nature that the other entrances are conveniently situated at the base of the cliff, rather than halfway up it.
Click to expand...

That's geology for you - the two large phreatic passages at the eastern end have a tendency to follow the base of the Urgonien limestone which form the cliffs.
A

Knowing (and admiring) the French way of things I fully expect on my next visit to find a series of abseil stations installed allowing access from the cliff top.  Or a via ferrata traverse, either will do.

Shame you didn't find it Andy then it could be called Sparrow' Nest.

I have been informed by Gilbert Bohec that there are now a further three entrances to the Dent de Crolles system, bringing the total up to sixteen. They are unlikely to be encountered by the casual visitor as they are in the middle of the eastern face, and were explored from the inside. They are between the le Nid de Choucas and Grotte des Montagnards, and more-or-less at the same height as the latter. Choucas and Montagnards are marked on Gilbert's photo below, and I suspect that the new entrances are on the ledge system running south (left) from Montagnards.

The length of the system is now about 60 km. 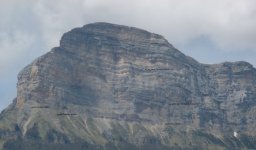 He also told me that a major inlet series is current;;y being explored above the Grande Cascade in the Gouffre Berger.

Here's an updated photo shewing the location of the new entrances in the eastern face of Dent de Crolles. The summit cross is just visible, and the entrances to Annette and Chevalier, with which some forum users will be familiar, are bottom left. 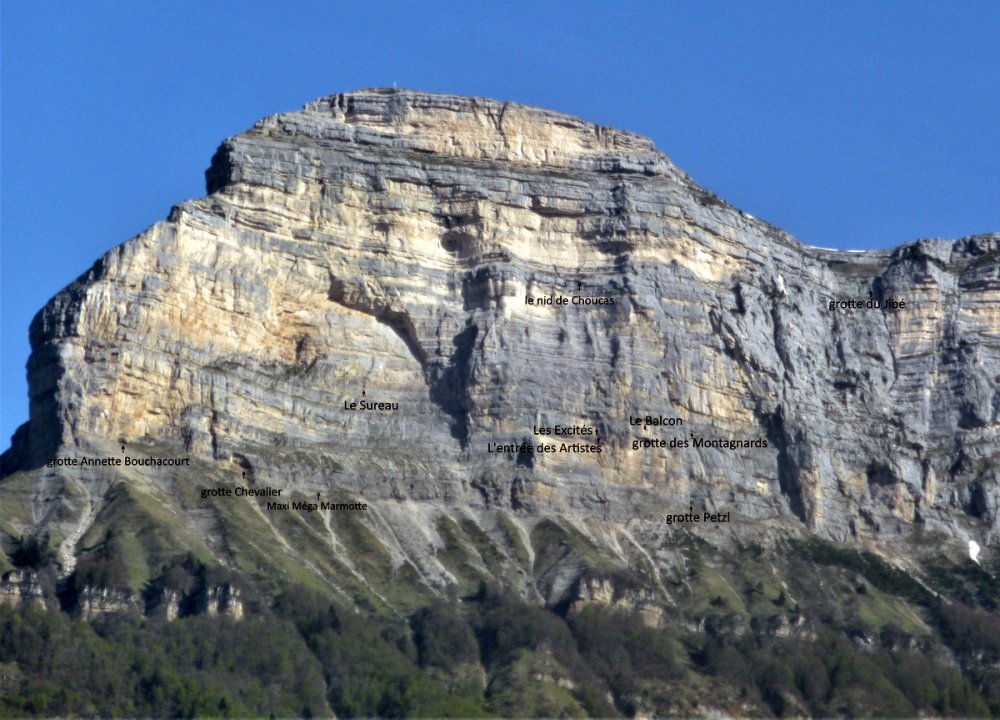