Had this setup on the go for a while but hadn't got round to it until now, might come in handy going up some of the big shafts around hear

Staff member
Selecting a shortlist from the above is going to be hard - some fantastic entries, just love how innovative and creative cavers are.  Thanks so much to everyone who has entered, I've really enjoyed reading this thread

It's the weekend, with no caving  but the sun shining  , you've still time to join in and enter this comp - ends Sunday, so get writing or inventing or repairing....

A couple of examples, not of equipment failure, but of failure to use equipment correctly.

Back in the 80s I had a wetsuit rather like yrammy?s in the photo above that somebody had given me.  I had to repair it before every caving trip because the seam used to split around the crotch.

One night we were returning from Tatham Wife Hole, I had plastic soles on my wellies and kept slipping on the wet grass slope so I decided to glissade (bum slide) which worked really well until I slide over a mole hill.  My wetsuit had already split and the mole hill produced what looked like the worst case of diarrhoea you could ever imagine inside my undies.

Back home whilst sorting out the gear in the cellar I cam across those undies again.  It was really late, I couldn?t put them in the washing machine like that so I tucked them behind something on a shelf meaning to sort them out in the morning.

Several years later I was splitting up with my partner.  As we were going through the house dividing possession she suddenly marched into the front room and said ?I?ve just found the most disgusting pair of shitty underpants in the cellar.?    I stood there absolutely dumbfounded having no idea what she was talking about it.  It wasn?t until the next day that I remembered that night coming back from Tatham Wife Hole but the relationship was too far gone by then to try and explain.

I have only just spotted this thread. I had a couple of anecdotes and realised they were linked by time and kit. So here goes:

In the early to mid 70's when many people were still working out what sort of SRT rig they were going to use I ended up with a pair of Jumars, a padded chest harness, a Neil box (a roller box that attached to the padded chest harness and allowed one jumar and the main rope to pass through) and, of course, a sit harness. These were all purchased from the now defunct Rocksport that was run by Bruce Bedford and Chris Bradshaw from an old bus station in Wells.  I took this system on the Iran '77 trip and on it's second use, I was moving up a shaft when Barry Weaver below started yelling at me to stop disturbing rocks. In fact he had been hit on the helmet by one of the nuts on the Neil Box that had worked itself loose. The system must still have been reasonably safe as I was able to do a number of other shafts later on.

Now, as some people know, I am never one to throw stuff away so we jump forward 40 years when I now have a family and two daughters who are cavers. One wants to visit St. Cuthberts Swallet. For anybody who knows the cave one can do a round trip from near the entrance starting with an abseil down the 20m Pulpit Pitch then returning via a series of fixed ladders. I told Sally she could borrow a descender and sit harness, left my gear out to be picked up and went off for the day. I returned that evening to find the kit returned but rather damp. I was rather puzzled to find my 40 year old chest harness absolutely soaked with no sign of my sit harness. The story emerged later. I am naming no names as the persons involved are cavers of long experience and stalwarts of MCR.  Sally arrived at the cave with her kit (including the chest harness - she had mistaken it for a sit harness). She had trouble putting it on (surprising that) so the two MCR stalwarts, slightly mystified by the design assumed it was a novel sit harness and proceeded to fit her into it whereupon she successfully abseiled down the shaft without incident. It was only when I telephoned one of the said stalwarts that they realised what they had done ie put my daughter  into a nearly half century old chest harness and sent her down a 20 metre pitch. Needless to say she now has her own kit.

There are many amusing trips relating to kit malfunction but this is my favourite...
Four of us set to complete the Swildon's short round.  Get to the first of the troubles, siphon working & bailing underway. 20mins later all good to go.  First 3 cavers through without a hitch however the fourth caver, who I'll refer to as Mr D, emerges on the far side of the duck splashing around without his helmet.  Turns out it was 'forgotten'.  Helmet retrieved on we go.  Trip proceeds without further hilarity until we get to sump one.  As per most trips I gave the instruction "once through, get moving to warm up and we'll meet a bit further upstream".  I go first, and find a place to regroup.  Quickly joined by caver no. 2 and then we wait.  After a while we start to wonder what's going on.  Having shut up gas bagging for a minute we hear a faint shouting amongst the water noise.  I go back to investigate...  Turns out caver no. 4, our friend Mr D, had now lost his wellies and were presumed to be somewhere downstream.  Further more, caver number 3 who I'll refer to as Mr L had offered to assist in retrieving the wellies but his latest home-made 'caving' lamp had disagreed with the sump and he was to be found a few metres downstream of Mr D in complete darkness.  With Mr L equipped with a spare torch and Mr D's wellies retrieved we made it to the entrance.  To this day I still don't know how Mr D managed to make it to the entrance on that trip with any clothes on at all.
These sorts of trips really are the best ones!
F

These sorts of trips really are the best ones!
Click to expand...

Maybe in hindsight . . . maybe not at the time! I once had to exit Lost Johns' Cave from the cascade above the last pitch sans wellies and wet-suit socks. The Battleaxe Bypass Traverse was very interesting in bare feet, I recall.

I've only managed a very small bit of gear fettling since lockdown began, though I should have done it months ago...

Before Christmas, I decided to buy some trauma shears for cutting dive line with one hand. Having experienced the poor performance of some expensive diving branded shears, I did some reading and one name came up again and again; X-Shear.

At ?45, the X-Shear is an order of magnitude more expensive than the cheap trauma shears you can get, but comparable to the cost of a shoddy diving branded shear. It is however incredibly highly rated. It is very simple, no extra gadgets, just a pair of scissors, but tough, and cuts through pretty much anything (and apparently keeps on cutting through anything due to the titanium coated blade). If it really was as good as it said, I was prepared to part with the cash and try it out; after all, if it works when you need it to, where an inferior tool would fail, it's worth it.

Having now tested the thing, I can confirm that it really does go through anything, from loose fishing line, to SRT rope with absolute ease; the line does not need to be taught or held with another hand, it just snips straight through, no matter what you point it at.  It also managed some heavy duty twin & earth pretty easily, but fell short of cutting an electron ladder...

The one drawback (other than the price) is that the tactical holster available for it, does not seem suitable for caving/ diving.

I'd got an idea what I wanted to make, but had not got around to it yet when, the week before lockdown, a friend gave me a bag of old diving bits including a tiny diving knife in a fabric sheath. The knife, nice as it is, seemed little use to me, but the sheath fitted the shears perfectly. However, the securing band was in the wrong position to hold in the shears.

So my gear fettle was to unpick and re-stitch the securing band at a jaunty angle, using my Speedy Stitcher. For those who don't know what this is, or don't own one, just go and buy one and try it out. An absolutely brilliant bit of kit for sewing tough fabric; pays for itself in a few oversuit patches, but also good for making caving belts, fixing tackle bags, re-stitching the hood on your vintage car, or whatever else you need to sew

Unfortunately the heavy duty nylon thread I have is white and the sheath is back, so it looks a bit crap, but with the shears in, you can't see the stitching anyway.

The final touch was to add a couple of bungee loops so it can be worn on the arm.

The result seems very good and is easy to operate with one hand in thick diving gloves, though I'm yet to see how easy it will be with frozen hands as well... 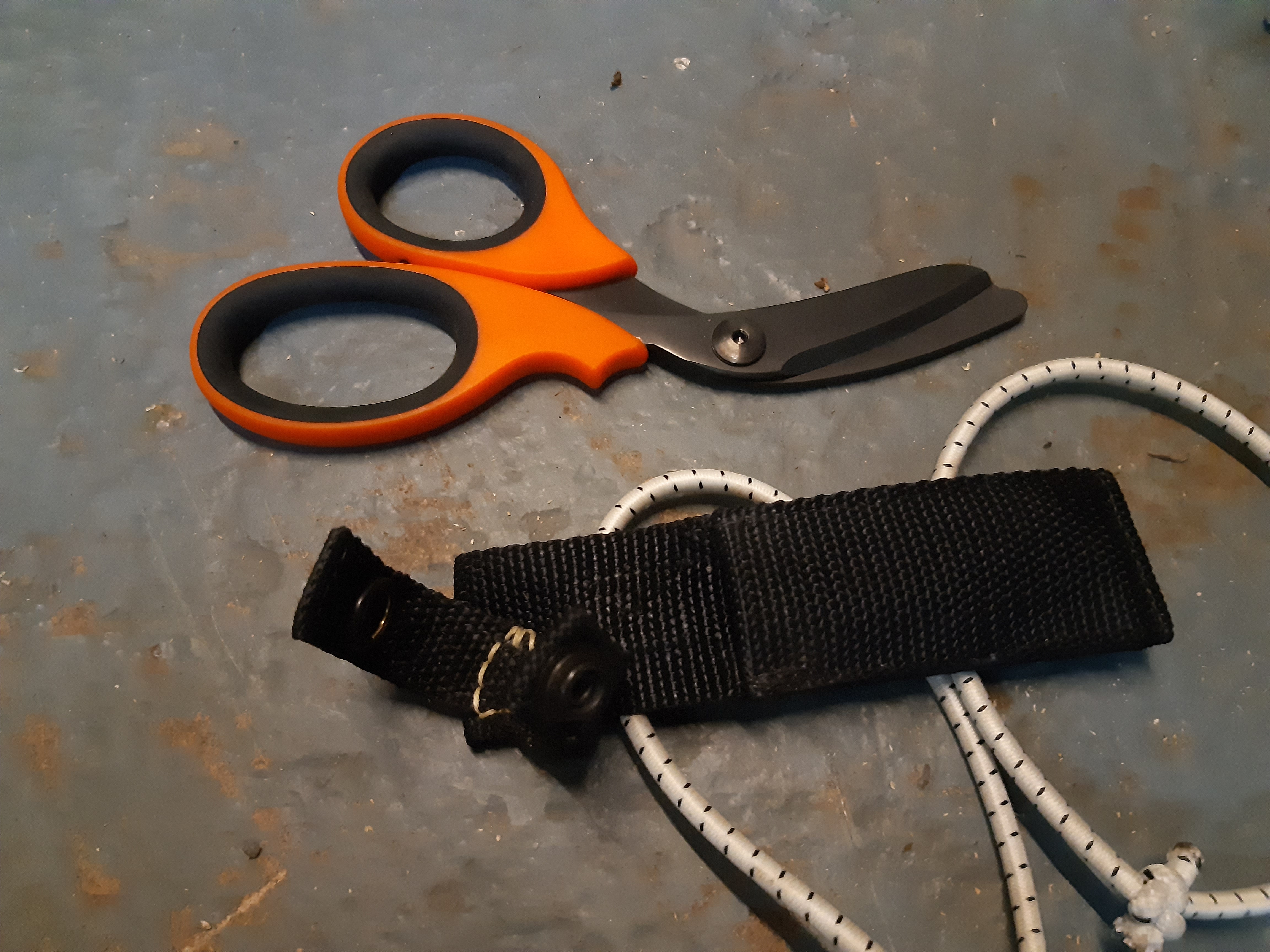 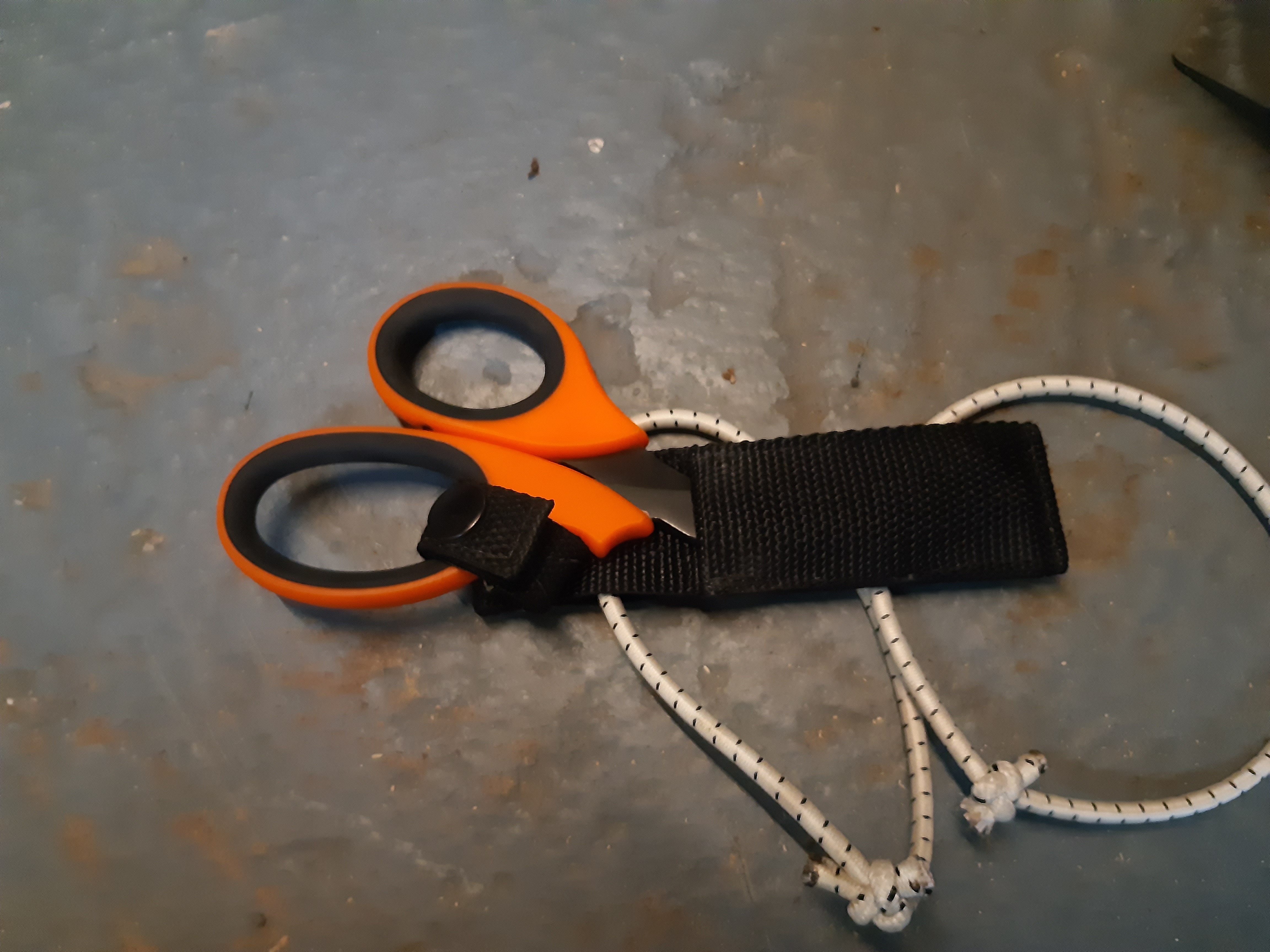 Gear building, as we live 150 miles from our nearest caves even at the best of times, we have built a training tower in the garden (see how long before we hear from planning .....)

PaulW said:
see how long before we hear from planning .....
Click to expand...

I'm pretty sure a temporary structure doesn't need planning, so you should be ok

Staff member
One of my favourite set of competition entries for ages - I've really enjoyed reading all the posts and have found it difficult to narrow down a shortlist.  Thank you to everyone who entered

Shortlist: (Yes, I know it's not a shortlist, but I liked them all - if you haven't already, have a read through over a cuppa  )

1) Brains and his video - could feel the cold

9)  slinkydan - climbing wall - though should have said caving wall!  :spank:

11) DaveyDubz - rivets put to good use

16)  Caver Keith - brilliant, made me laugh out loud

...and the winner is (thank you Random.org) Lisa Crow - Congratulations, Lisa!!

Once again, thanks to All who entered, these posts do brighten the day.  Hope you are all keeping safe and well.

I have a tale about dodgy lighting but will save it for another time. I even named a section of cave after it. You may need to remind me!
L

That's awesome I loved reading all the posts on here, I'm glad to say though I have no equally terrifying stories myself (yet). MUSC has a few SRT bits that need to be retired so this will go towards replacing them and I think I'll have to buy some post-lockdown pints for those who contributed to the art
You must log in or register to reply here.
Share:
Facebook Twitter Reddit Pinterest Tumblr WhatsApp Email Share Link