We are just getting used to cryogenic structures . Here is another emerging cave science where we might find instances in the field.

"Hypogenic speleogenesis is the formation of solution-enlarged permeability structures by waters ascending to a cave-forming zone from below in leaky confined conditions, where deeper groundwaters in regional or intermediate flow systems interact with shallower and more local groundwater flow systems. This is in contrast to more familiar epigenic speleogenesis which is dominated by shallow groundwater systems receiving recharge from the overlying or immediately adjacent surface.

Hypogenic caves are identified in various geological and tectonic settings, formed by different dissolutional mechanisms operating in various lithologies. Despite these variations, resultant caves demonstrate a remarkable similarity in patterns and meso-morphology, which strongly suggests that the hydrogeologic settings were broadly identical in their formation. Hypogenic caves commonly demonstrate a characteristic suite of cave morphologies resulting from rising flow across the cave-forming zone with distinct buoyancy-dissolution components. In addition to hydrogeological criteria (hydrostratigraphic position, recharge?discharge configuration and flow pattern viewed from the perspective of the evolution of a regional groundwater flow system), morphogenetic analysis is the primary tool in identifying hypogenic caves.

Cave patterns resulting from ascending transverse speleogenesis are strongly guided by the permeability structure in a cave formation. They are also influenced by the discordance of permeability structure in the adjacent beds and by the overall hydrostratigraphic arrangement. Three-dimensional mazes with multiple storeys, or complex 3-D cave systems are most common, although single isolated chambers, passages or crude clusters of a few intersecting passages may occur where fracturing is scarce and laterally discontinuous. Large rising shafts and collapse sinkholes over large voids, associated with deep hydrothermal systems, are also known.

Hypogenic caves include many of the largest, by integrated length and by volume, documented caves in the world. More importantly, hypogenic speleogenesis is much more widespread than it was previously presumed. Growing recognition of hypogenic speleogenesis and improved understanding of its peculiar characteristics has an immense importance to both karst science and applied fields as it promises to answer many questions about karst porosity (especially as deep-seated settings are concerned) which remained poorly addressed within the traditional epigenetic karst paradigm."

If you want to know more, the BCRA is running a field trip to the hypogenic maze caves of the Northern Pennines on Sat/Sun 29/30 June 2019 in Alston, Cumbria. Still some places available.

Lots of hypogenic caves in the UK; the pennine maze caves (knock fell caverns etc), but some in the Peak District including the phreatic vein cavities such as Titan and Eldon Hole. Down south we have Pen Park Hole, plus some of the caves in western Mendip on Crook Peak/Axbridge Hill. And in South Wales, the mazy bits of Draenen may be hypogenic. Some phreatic vein cavities n N Wales too.

Here is a possible one in Somerset. A deep shaft down to water as far as I know undescended. Went there a few weeks ago and got chucked out by the game warden. Interesting as formed on a byrite vein and remote from any other caves. 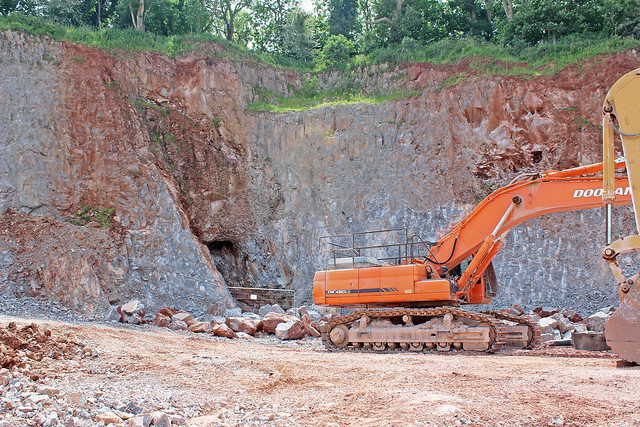 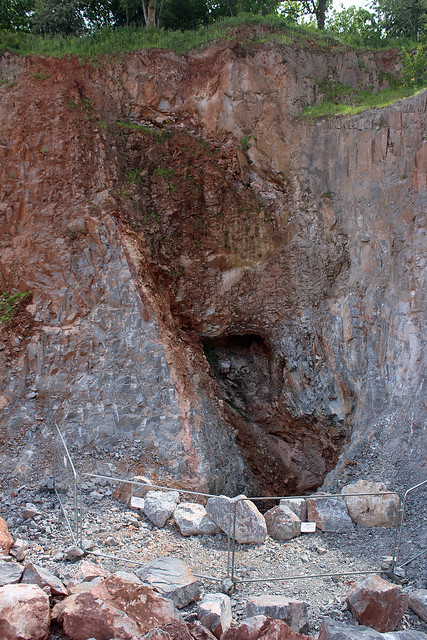 "A deep shaft down to water "

Cant say as too sensitive a site. :

Coming back to this subject it seems possible that most of the known cavaties within the Devonian Limestone of the Quantock Hills in Somerset might be hypogenic. Holwell Cavern an example but we are currently looking at more and all have features in common.

A newly discovered Quantock chamber aligned along a baryite lode which can be seen on the left and which forms the entire wall of the chamber.

The baryite wall of the chamber. This about 300mm thick a section of Devonian limestone is blocking further development following the wall downwards. There is a lot of fill comprising mud and limestone boulders.

A large limestone boulder that was buried in mud adjacent to the baryite.

Boulders and fill originally to the roof at the start of the dig.