That line of craters looks very like an old worked out rake.
I reckon T'owd Man got their first! 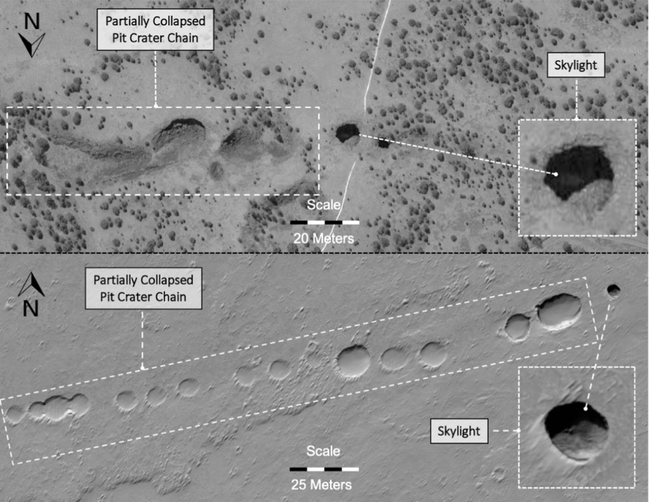 Just Google lava tube pit collapse & most of them will be on Mars or the moon...

Maybe the Cavedale lava was far more extensive that Trevor Ford let on!

Collapses along a line of weakness are going to look similar.

When we get to Mars, will the caves be more collapsing because there is no air pressure, or will they be massive because of a lack of gravity?

When we do digs will we be able to use superlight aluminium scaff?
K

Have any of you read William Halliday on Martian caves? Not long before he died he asked me to survey a sandstone feature for him for an upcoming book which dealt with Mars analogs. I don't know if the book was ever published, or even if Dr. Halliday's head was screwed on straight (to an ignoramus like myself he seemed to be slightly fantastical when talking/writing about Mars) but he was sure a gracious guy and wrote a lot of good caving literature.
M

2xw - I think you might need to learn dry stone walling with basalt...

2xw said:
...or will they be massive because of a lack of gravity?
Click to expand...

This one, i believe. It says so in the article...

2xw said:
When we get to Mars, will the caves be more collapsing because there is no air pressure, or will they be massive because of a lack of gravity?

When we do digs will we be able to use superlight aluminium scaff?
Click to expand...

Problem will be getting the scaff there, they are very fussy about weight loads in spaceships...

You could always use Mars bars.

You'll need to take some potatoes and plenty of tomato ketchup, and the disco music is of course optional.  They'll also need to decide between imperial and metric before the spacecraft crashes.
Humour aside, a Mars mission or two is really needed. Earth will get another mass extinction sooner or later. Russian spacecraft seem reliable so just bung Putin some more cash to fire up the Soyuz to put the stuff in orbit. Phased multiple missions is the way.
D

Absolutely.  Let?s get terraforming mars. ASAP.
We survived 18 covids.  Struggling with 19. What?s next.

All those virgin lava tubes to explore.  We can keep the bad air out with ventilators.  Get some super fast plants growing on the surface to convert the air to oxygen.  That won?t take long.
Caving will be easier like you say with the lack of gravity.  Easy pitches.  Aluminium Scaffs too good point.
I?ll miss the water but there maybe some of that at the poles that where I would head.

We could go with Putin but I think he would favour mother country people over uk?ers.
I would put my faith in Paedo Musk (I can call him that because it?s not offensive where I come from).  He?s sussed out the transport in space already.  Cars, and we know how to make cars so that problems solved.  Disco musics fine.  I like the full range of music from country right through to western.

Covids here to stay.  Vaccines don?t work.  Here are some papers to prove this. (You are fucked if you take a vaccine. Dr Wakefield dphd bsht. ).  (Better dead than autistic.  D ike.  Son of god ).  So let?s get to mars quickly.  It?s the easiest option.

If anyone has a genuine interest, paedo musk (a twat but the spaces engineers are still cool) is sending a crewedars spaceship to the iss at the end of the month.
M