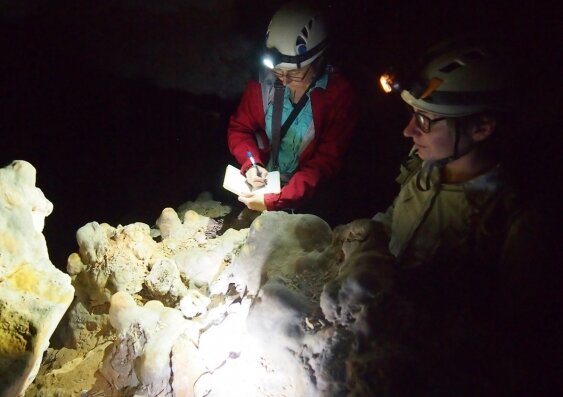 Like Plato's Cave, where fires reveal the portrait of an otherwise hidden reality, researchers have for the first time used a stalagmite's chemical signal to reveal the nature of Australia's historic wildfires, identifying differences before and after European settlement.

"Nutrients such as phosphorus, and trace metals are found in bushfire ash and, in theory, can dissolve into waters that eventually infiltrate underground caves. Our research provides the first evidence that water containing high concentrations of these dissolved ash-derived elements can also alter the chemistry of a stalagmite and result in the preservation of signals from past fire events," says Dr. McDonough.

Seems fairly expected to me - 'land management' resulting in larger, more intense (but less frequent) fires rather than smaller natural ones. Pretty sure this has been well-understood for decades now.

The narrative of all pre Anglo Saxon derived civilisations being 'at one with nature'. Sounds more like 'slash and burn' was the order of the day.

ChrisJC said:
The narrative of all pre Anglo Saxon derived civilisations being 'at one with nature'. Sounds more like 'slash and burn' was the order of the day.
Click to expand...

I didn't read it like that, rather that the original practice was to do frequent small burnings to which the flora and fauna were adapted and from which they quickly recovered. As opposed to recent practices of leaving the bush untouched resulting in a build-up of tinder and then big, catastrophic fires.

I had assumed the bushfires were primarily natural (as wild fires are very natural to the point that certain trees can't reproduce without them), but you are right that some might be started intentionally or unintentionally by human activity.

As for:
"The narrative of all pre Anglo Saxon derived civilisations being 'at one with nature'. Sounds more like 'slash and burn' was the order of the day.

I'm not sure who's narrative that is supposed to be... the reason that early civilizations didn't have much impact on the global environment was surely due to limited populations and limited industrialization, not because of some hippie 'at one with nature' nonsense, and I doubt you'd find many sensible people to believe that.

That said, there is evidence that early hunter-gatherers had shorter working hours than we did, so who knows (probably balanced out by the dying at age 30ish though).
D

To put this in perspective, the arival of humans in Australia ~ 70K years ago had a HUGE impact on the environment. The use of widespread fire caused permanent shifts in the vegatation ecology and was associated with a devastating wave of vertebrate extinctions. The fauna didnt "adapt and recover", it died. The vertebrate biodiversity of Australia that survived until the European colonization was a shadow of what was there ~ 100K years ago.
You must log in or register to reply here.
Share:
Facebook Twitter Reddit Pinterest Tumblr WhatsApp Email Share Link