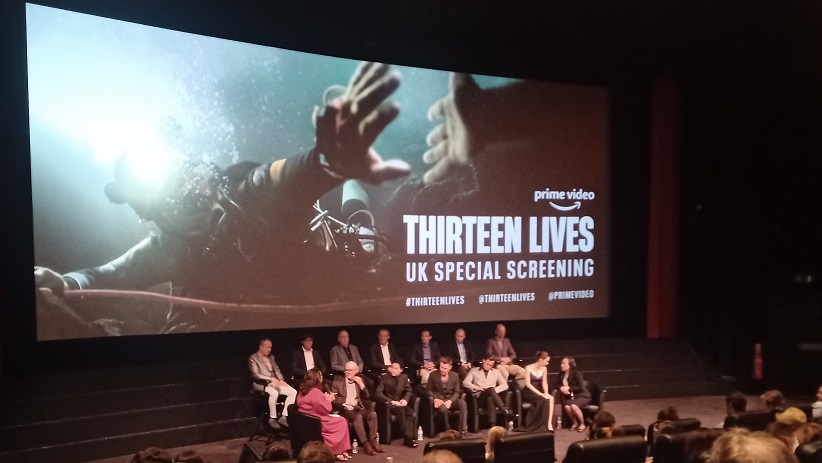 I had the privilege to attend the première showing of this film at the Vue West end Cinema, near to Leicester Square in London on Monday July 18th. The screening was a “blue carpet” event with several of the cast and crew present including the director, Ron Howard. The film tells the story of the 2019 Tham Luang Cave rescue and is a dramatized production rather that the National Geographic documentary (“The Rescue”) which came out last Autumn. I’m sure readers will be familiar with the plot and the occasion was also attended by several of the people involved in the real-life events upon which the film is based: cave divers Rick Stanton, John Volanthen, Chris Jewell, Connor Roe & Josh Bratchley, surface controller Mike Clayton plus Thai water engineer Thanet Natisri. These people were accompanied by their significant others, family, and friends – I hope I still fall into the final category after writing this.

The weather in London was brutally hot and it was a relief to get inside the air-conditioned cinema and avail oneself from the free drinks trolley. The representatives of the caving community made a brave attempt to consume all the alcohol before Ron Howard appeared at the front to introduce the film. The director stressed that it was a drama rather than a documentary and that selected events had been depicted with artistic license. It was very strange to see actors portraying people that one has known for many years.

The principal protagonists, Rick Stanton and John Volanthen, are played by Viggo Mortensen and Colin Farrell respectively. Farrell does a very convincing John Volanthen and is more like John than John is! Filming was done in Australia and Thailand during the COVID pandemic and although Rick Stanton & Jason Mallinson flew to Australia to act as consultants on the set, Farrell & Volanthen were only able to chat over Zoom. Farrell is a method actor and even took place in the New York marathon to prepare (John Volanthen is a keen ultra-long-distance runner). Farrell captures many of his counterpart’s mannerisms such as pushing his glasses up his nose and various facial expressions. In comparison, Mortensen is less convincing as Rick Stanton, although this is compensated by the attention to detail of the set of his abode in Coventry, complete with kayak in the living room and 70s Bang & Olufsen hi-fi. We later see more of Rick’s home including his hallway and kitchen complete with menu from the local takeaway pinned to the wall - it is difficult to believe that you are looking at a sound stage down‑under rather than a semi-detached house in the Midlands.

Supporting roles are played by Joel Edgerton as Australian cave diving anaesthetist Richard “Harry” Harris (who is much funnier in real life than his character), fellow Australian actor Paul Gleeson as Jason Mallinson (Gleeson has more hair, few lines – struggling with the Huddersfield accent – but portraying Jason’s manner well) and British actor Tom Bateman as Chris Jewell (portrayed as someone a little out of his depth – I spoke to Chris after the screening about his portrayal and he’s comfortable with it – “it’s just a film” he said). Connor Roe and Josh Bratchley’s characters appear on screen, but Irish cave diver Jim Warny and Australian cave diving veterinarian Craig Challen do not feature. Both had signed up to other productions and were cut from the screen play. Australian actor Lewis Fitz-Gerald (as Vern Unsworth) completes the team as the non-Thai central characters (there is token representation of the US special forces with two people being shown). Fitz-Gerald plays Unsworth as a more restrained person than in real life and I understand that those involved had to fight to get his part included even though he had a key role in calling them in.

Left to that, the film could have easily turned into a “white saviour” story whereby Johnny foreigner is rescued by some Brits and their friends from the colonies. Balance is provided by a sub-plot involving the locals’ efforts to divert water from going into the cave system showing the sacrifices and ingenuity required to achieve this. Thai bureaucracy and the tensions between different groups is treated with a light touch. All the dialogue between the Thai’s is in their native tongue and subtitled. The actor who portrays coach Ekk was amongst those present and I spoke to him later. He took great pains to learn the local dialect to ensure accuracy.

Although, there are some deviations from reality (for example Harris knew the plan to sedate the kids before he left Australia and when the kids are being sedated & prepared for evacuation, this was done out of sight of those staying behind), I found some of the scenes very difficult to watch as they were so realistic. Maybe this would be lost on most viewers unfamiliar with the sport, I don’t know.

During the scripted Q&A session with everyone following the screening it transpired that the diving actors had done a lot of the filming themselves to add to the realism and had even worked extra hours to achieve this. I can’t fault the props – all the divers are kitted out with accurate facsimiles of the gear that they used even down to Rick Stanton’s trademark rubber ring buoyancy compensator (although the T-shirts worn by the actors when not in caving kit seem to be a bit too new and clean in contrast to the distressed look of their wetsuits). Ron Howard et al. have done a great job of condensing the events of 23 June to 13 July into two hours and twenty minutes (there are four hours of footage so perhaps we can look forward to a director’s cut).

Thirteen Lives was originally due for release at Easter 2022, but this was pushed back to November after favourable test screenings to improve its chances in the awards’ season. The recent acquisition of MGM by Amazon changed all of that, and the film will now appear on limited cinema release from July 29th before becoming Amazon Prime’s “tent‑pole” production for the summer season from August 5th. See it in the big screen if you can – it is an excellent film.

Many thanks to John Volanthen for getting me an invitation – it was worth the train cancellations and delays due to the high temperatures. The post‑screening party was a blast, and we were ejected from the venue at 1 am after consuming a lot of cocktails. The cavers were last to leave…

Staff member
Thanks for the thoughtful write up, Duncan - am hoping to see the film for my self on the big screen. I bet being at the premier was heaps of fun, what an opportunity!

Not got the biggest theatrical release.
M

Covid has led to there being more money online than in theatres for most movies. There were several other screenings at the same time as the premiere, next it opens on 29th July for only a week, before streaming begins on Prime.

Rick seems to have been interviewed more than anyone else on the night (link to videos):

Would be great if someone could arrange a screening in Wells

Or Bristol (the watershed is a decent independent venue)

mikem said:
Or Bristol (the watershed is a decent independent venue)
Click to expand...

It is all down to the distributor - United Artists releasing. So it is being shown in selected Curzon cinemas only.

I suppose that there's nothing stopping me inviting a few mates around to watch it on our telly (its not very big) as we have Amazon Prime so long as I don't charge you (and you bring your own beer).

So would it be any infringement if a village hall I knew that had a tv licence with permission allowed a person to play it through Amazon prime on a projector?

There might be a cost for hiring the village hall?
(Priddy village hall has hire charges).

mikekushy said:
So would it be any infringement if a village hall I knew that had a tv licence with permission allowed a person to play it through Amazon prime on a projector?

(As long as there’s no charge and they bring their own drinks)
Click to expand...

Better set up a GCSE in cave rescue....

There's and interesting article on the US Outside Online site about the actor who played Rick Stanton in the film and his approach to playing the part: https://www.outsideonline.com/cultu...tensen-thirteen-lives-thai-cave-rescue-movie/
M

That was good fun
J

paul said:
There's and interesting article on the US Outside Online site about the actor who played Rick Stanton in the film and his approach to playing the part: https://www.outsideonline.com/cultu...tensen-thirteen-lives-thai-cave-rescue-movie/
Click to expand...

I like the quote from Mortensen's interview:
“These guys are the biggest nerds in the world and, at the same time, they’re all like Evil Knievel. It’s kind of a weird combination,”