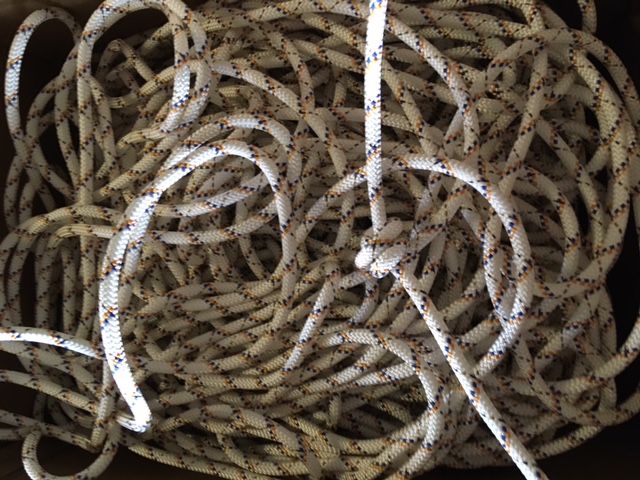 Hey all. It's that time again (or a bit late even) for ukcaving to offer some help to the usual student/young caver summer expeditions.  The rules are similar to previous years but this time the amount of rope should be greater. Awards will be made once we see who applies. See here for last years comp;

..and some of the winners;


So how do you get hold of this rope?  Well... the more coverage your expedition gets the better it is for all your sponsors... and cavers like to hear your expedition stories..... so you're going to have to blog about your expedition on ukcaving.  What does that mean?  To apply you will have to post on the 'expeditions' board of the forum giving some history, details, hopes and objectives of your trip.  Those who have applied before are very welcome to apply again.  If you kept us all well informed before then you are likely to be successful again.

We'll make our decision in just over a week so you'll have to get your skates on.  Closing date is 10pm Monday 24th June.  As part of the deal you give a commitment to blog about the trip on the same thread.  This must include as a minimum; a post before departure, two posts from the field and a good report upon your return.  Make it positive and fun and that will help with recruitment and sponsors next year.

The rope will be 9mm SRT purchased through Spanset UK.  This is a UKcaving sponsored initiative but we are very grateful to Spanset for offering a generous discount and supporting many other caving projects.

Staff member
Bump - you only have a week so trying to make sure as many folks as possible see this post.

If you know anyone going on expedition, please let them know there's free rope available, thank you.

Last weekend was the Dachstein expedition training weekend, so we've been a bit busy - but we have been very lucky to get UKCaving rope before which makes a massive difference to an exped run on a shoestring budget, so thanks again, and we will be entering the competition as soon as I (or someone else) gets a chance!

In the meantime, you can read about our plans for this years expedition here:
https://ukcaving.com/board/index.php?topic=24809.0

And as usual we are a totally open expedition (and we've finally just announced the exped fee, hint hint ) so if you are interested get in touch

Any plans to do a similar deal again for exploratory work in the UK.  We have benefitted from some rope employed to do climbing work beyond sumps in Wigmore Swallet and Wookey Hole in the past?

Once again I'll plug our thread here on the forum with a lot of background information about the Dachstein expedition, why it is great and why every aspiring (or experienced!) expedition caver should sign up immediately

We would definitely like to enter the (very generous!) UKC rope sponsorship deal

The Dachstein expedition is a long-running expedition, with the first British exploration occurring in the area in the 1960s and serious regular exploration occurring from the 1980s onwards. Various clubs and groups have been involved over the years, including the BEC and Cardiff University alumni, but last year we finally confirmed the connection between the 112km long Hirlatzh?hle, accessed from the valley, and the expedition-discovered WUG Pot, accessed from the plateau at an altitude of over 2000m. This has raised the depth of the Hirlatzh?hle to 1560m, making it the joint ninth deepest cave in the world and the deepest cave ever explored by a British expedition. This year the hunt is on for connections to various higher entrances to push us up that ranking even further!

Despite all these achievements, the Dachstein has for many years been a training expedition. It has been and continues to be very popular with students and newer cavers as a place to cut their expedition teeth. While there is some hard caving to challenge any caver (and you will hear some true horror stories from the past), the current deep cave is comparatively easy for experienced cavers (although still a serious deep Alpine cave), and there are a range of other shallower caves currently being pushed. There is also almost unlimited scope for prospecting. With the retreat of snow and ice from the glacier, many previously snow-plugged entrances are becoming open, giving new cave within a reasonable striking distance of the bar. Yes, the Dachstein is lucky enough to be based at the Wiesberghaus mountain hut, complete with bar, seilbahn to carry your gear up the hill, charging facilities and other comforts - no bivying outside for us (unless you want to!).

There is, of course, more to life than caving (blasphemy, I know) and the local area also has other mountain huts to visit for food and drink, climbing, excellent walking including a major glacier and some fantastic via ferrata from very basic to seriously extreme. We also have a few 'tourist' caves, including an ice cave which is an excellent place to practice your photographic skills.

As a training expedition, we have always been very aware of cost for cavers, particularly poor students. We are probably one of the cheapest expeditions - driving to the exped with a group of people can save considerable money over an expedition that requires flights, accommodation was ?5 a night last year, and we try and keep our fees as low as possible (?70 exped fee and roughly ?10/week for fresh food and vegetables). It would be very easy to raise our fees to bring in more money for rope, hangers and maillons, but this would make it even harder for our poorer students to justify the cost.

The cost of going on an expedition (and for many of our members, this may be their only expedition of the year) has been raised even further by the increasing cost of insurance. I am expecting to pay around ?70-80 for my single trip this year, more than my expedition fee. The new BCA insurance is very welcome here (and we are hoping to help people further by organizing this as a group for a discount).

Donations, such as the ?1200 from the Ghar Parau for (primarily) a cave-link set can make a massive difference on an exped like ours run on a shoestring budget. If we were to receive UKCaving rope it would greatly help our (currently diminished) rope stocks. It might also benefit the less experienced and newer members more. When resources are low, and stocks of rope, hangers and maillons are dwindling, these resources have to (by necessity) restricted to the 'core projects' of the expedition. This tends to mean that surface prospecting and speculative exploration of shallow caves has to be restricted for that year, and that can have a negative (and unfair) effect of newer cavers who do not have the experience to safely push the deep caves.

When we have enough equipment, we can spread our wings much more widely. It is very important to me that we maintain our training focus; this year I would like to see an increased amount of prospecting for new cave, and we have several shallow caves which need to be pushed looking for connections to WUG to push the depth of the Hirlatz. I would also like to buy a third expedition drill (currently we have a good expedition drill and a usable 14V drill, in addition to personal drills) so that less experienced teams can use this for prospecting and exploring shallow caves.

I have assembled a (currently small!) 'social media team' for the Dachstein, and I am happy to commit us to writing reports on this forum before, during and after the expedition as required by the competition - and I would hope we do much better than this (after a unfortunately quiet year last year due to media secrecy over the connection).

Staff member
Thanks for all the entries. At first glance they look great  I've got a couple of busy days ahead but I'll get back to you all as soon as possible.

Duncan Price said:
Any plans to do a similar deal again for exploratory work in the UK.  We have benefitted from some rope employed to do climbing work beyond sumps in Wigmore Swallet and Wookey Hole in the past?
Click to expand...

No plans at the moment.  We did give away 2.4km of 11mm rope and over 100 steel karabiners to UK projects a couple of years ago but that was due to a specific opportunity that arose.  If something like that turns up again we'd be only too happy to repeat it.

If there is any UK exploration project that is prepared to regularly update the forum on their progress then we'd be happy to consider some sort of support if that was needed.  The Frozen Deep, Tankard Shaft, Eldon Hole digs have keep us all on the edge of our seats for years.  We need more of them.  Cheers

Many thanks for your excellent entries to the rope sponsorship deal.  All four entries are from fantastic long term projects, well respected and deserving of support.  We will support all four this year although with varying amounts of rope.  As well as the project itself I have considered the effort each team has gone to in keeping us all informed of their successes in the past few years.  This should be mutually beneficial as many viewers are interested in these trips.  Therefore;

ICCC/JSPDT Slovenia - 500m of rope awarded.  Ditto, ditto.  Get in touch asap so we can sort something before you go.

Dachstein - 200m of rope awarded.  Great expedition but we have heard little about it on here compared to others.

On behalf of the Dachstein I want to say thanks to UKCaving for the rope (which increases our current rope stocks by about a third, although we will obviously be buying more once people have paid!) and for their support of expeditions more generally

Many thanks from the Tresviso expeditions!  The rope will be put to good use and it's been promised to be put to good use on the first through trip from Cueva Silvestre to Cueva de la Marniosa.  A forum post on that trip a certainty

Wow, thanks UK Caving on behalf of ICCC,

This is superb news for the Migovec expeditions, boosting our stock by a generous 50%, and will go a long way to ensure continued exploration of the system! Stay tuned to catch the developments on setting up the new underground camp and exploration in the depths of Primadona.