Staff member
Here are the two videos I mentioned. The first I took whilst rigging the 'Bladerunner' pitch - sat on the rebelay. The second shows what is at the bottom. You'll have to excuse the commentary.

Staff member
'They are all up there shifting rocks'

Staff member
On the same day reported above we had broken into a mighty shale bed passage we called the Marmalade Sandwich. This ended at another pitch. The pitch head was very tight but belled out immediately below and looked great. A little bit of capping was necessary at the top to make the pitch 'all inclusive'. Rocks rumbled down and indicated a drop of around 20m again. Bolts were placed in the roof for a very nice hang and the lead given over to Mick to descend first.

I caught his descent on video which I will post later when uploaded. The almost astonishing thing about this descent is that Mick only recently recovered from having ankle replacement surgery. When I say recently recovered, I really mean 'still' recovering from recent ankle surgery. He was back caving just three weeks and five days after the operation and this was only a few weeks later on from that - don't tell his surgeon . Anyway he named the pitch 'My Left Foot' consequently.

Towards the bottom of the drop a couple more shale beds are noticeable. A large ledge has formed on one of them and a obvious aven ascends on the far side of it. A beautifully scalloped trench is formed between and leads down in fine style. Almost immediately though it becomes too tight and awkward where thin vertical flakes prevent progress. Beyond the echo confirms another pitch, as does rock throwing. It will be another trip of capping to open it up. 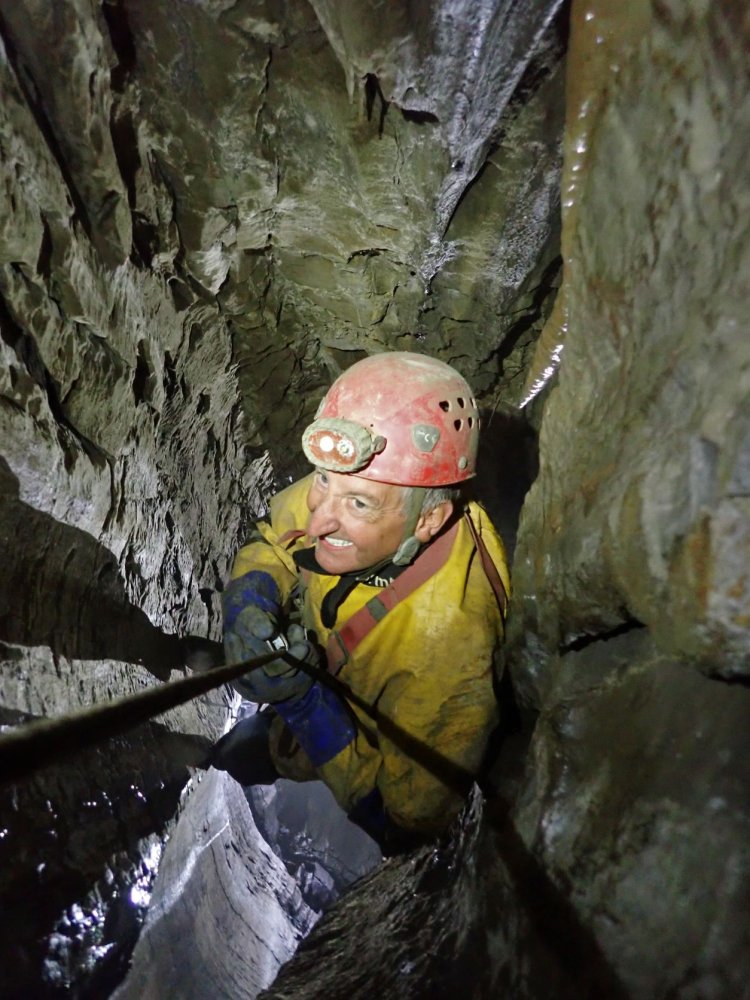 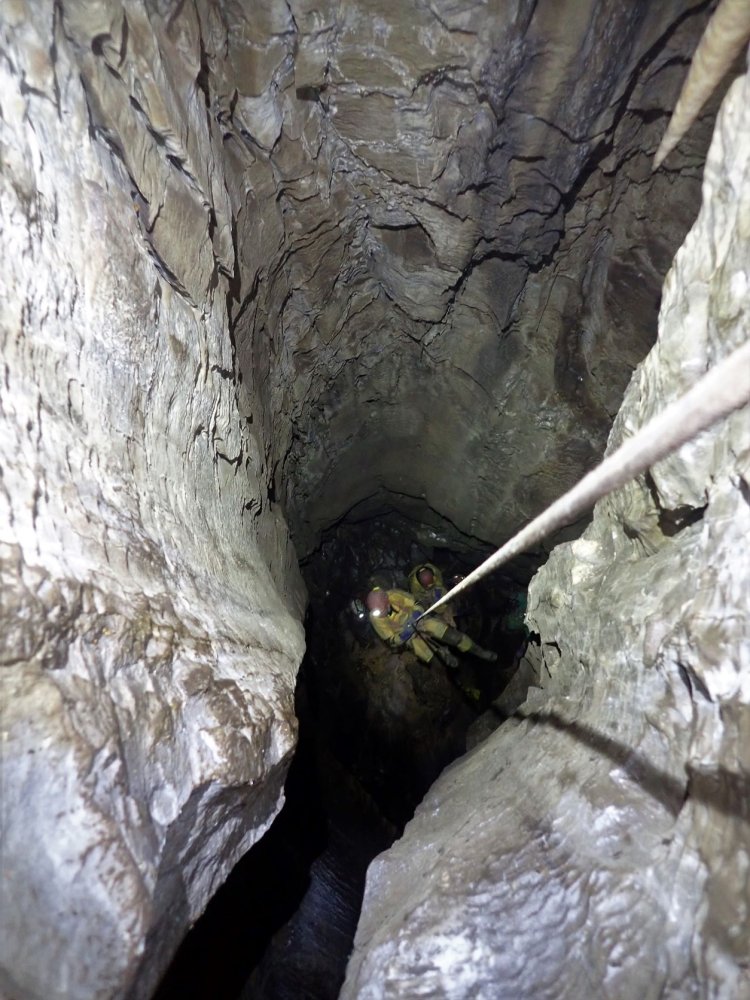 Some beautiful scalloping leads down to the next pitch 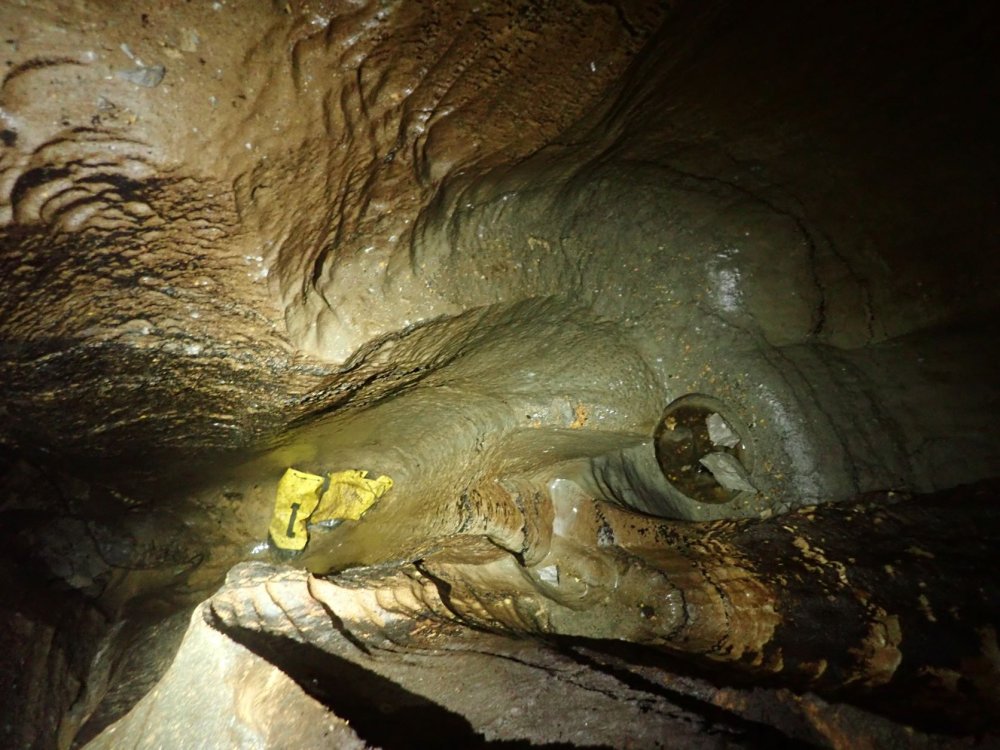 A few happy bunnies sat on the ledge. All these photos taken on the day by Franklin 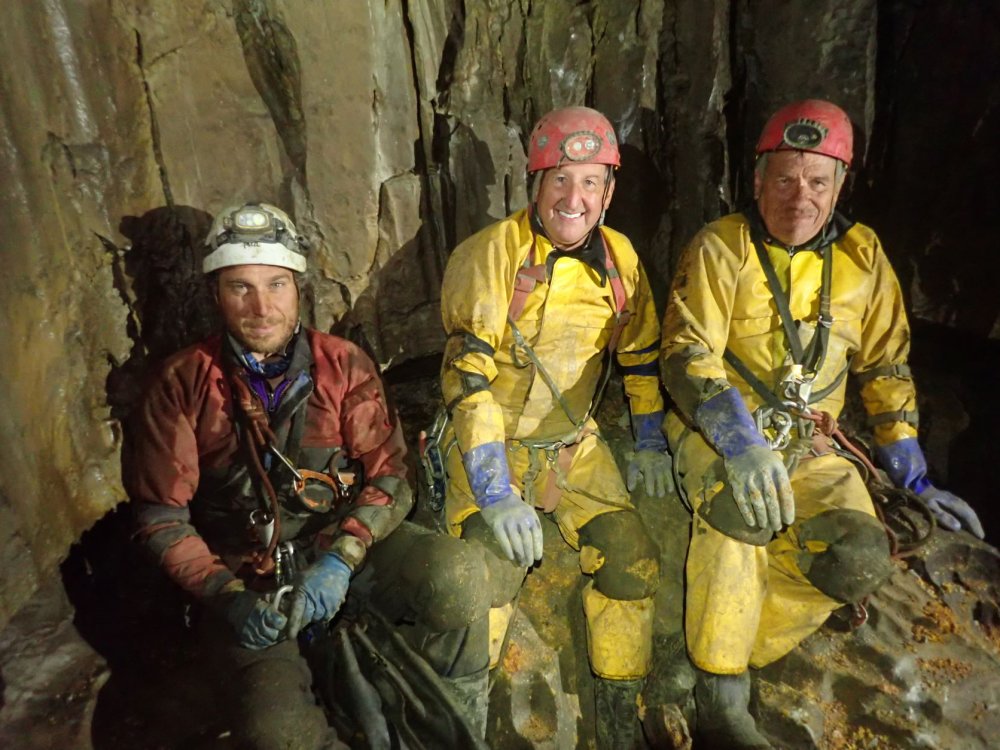 Video to come and then we'll set about the next drop


If you have more time this is a longer clip of Mick's first descent. Normally he is a lot quicker

Fantastic stuff as always. Nothing to add - just feels wrong not to register my appreciation.

Staff member
At the bottom of My Left Foot the narrow rift led off obstructed by a number of flakes. A hole could be seen directly below but it looked better to traverse along a bit before dropping down. We expected a better pitch and hang would be found there. As the wall comprised of sets of thin vertical flakes and joints, it took a bit more capping than expected but, sure enough, it led over the hole and cut down to a fine looking drop. The pitch head itself needed no refinement, but most of the debris from the rift had gone down the hole and its lack of re-appearance at the bottom had us wondering where it led to. A simple Y hang dropped straight down a spacious pitch and after ten metres or so a narrow slit appeared where our debris could be glimpsed teetering in a parallel pot. After 15m I landed on a large blade of rock creating a suitable ledge for a rebelay and soon came to rest 5m below that at the bottom of the pitch.

A wide clean washed floor had a small trench cutting through the side of it which led straight into a tall narrow rift continuation. Of course it was too small to progress as it was. The whole team came down bringing with them all the gear and the picnic food for lunch. It was a fine place to sit around eating doughnuts and drinking coffee whilst someone worked the front. On reflection the drop was named Picnic Pitch.

A couple of trips ensured to make the rift bigger. It quickly dropped away and echoes suggested another pitch was imminent. On the second trip here a certain person (who can't sit still) decided that the rocks coming out of the front needed to be made smaller. The result was a broken hammer shaft. Capping continued using just the metal hammer head until that got dropped down the rift ahead. Then a suitable rock was used to set the caps off but this was far from ideal in a narrow rift. Consequently another trip was needed to finish the job and even then the last of the batteries was used capping, not even leaving enough power to place a few bolts. The open pitch was left until the next trip as the video shows. 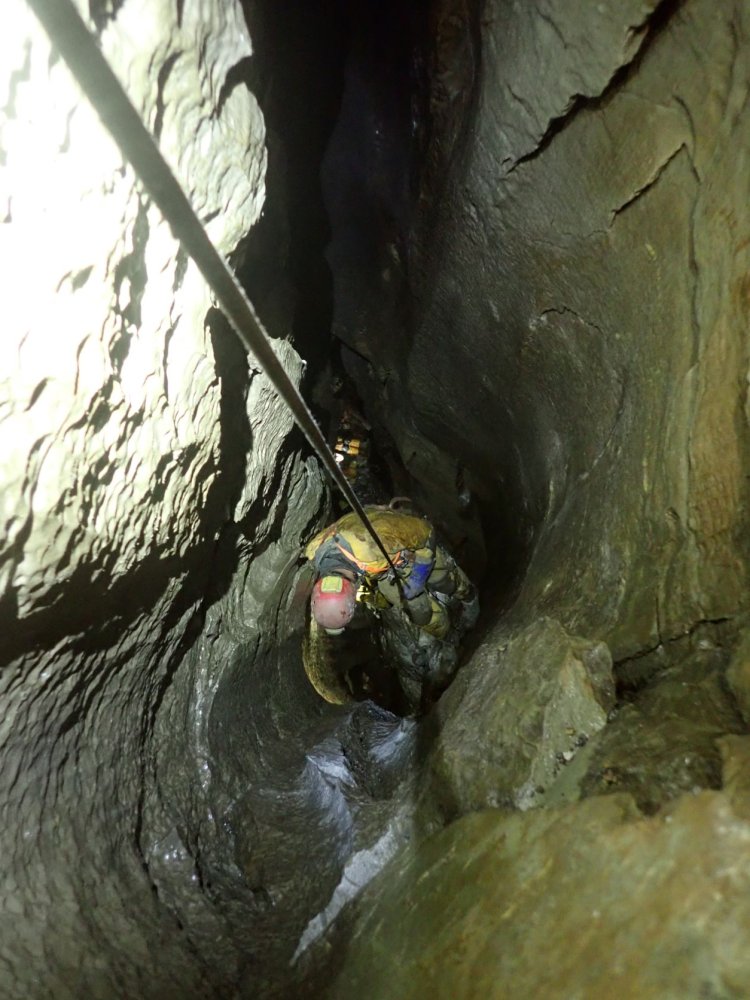 Looking up from the bottom with Dave at the rebelay 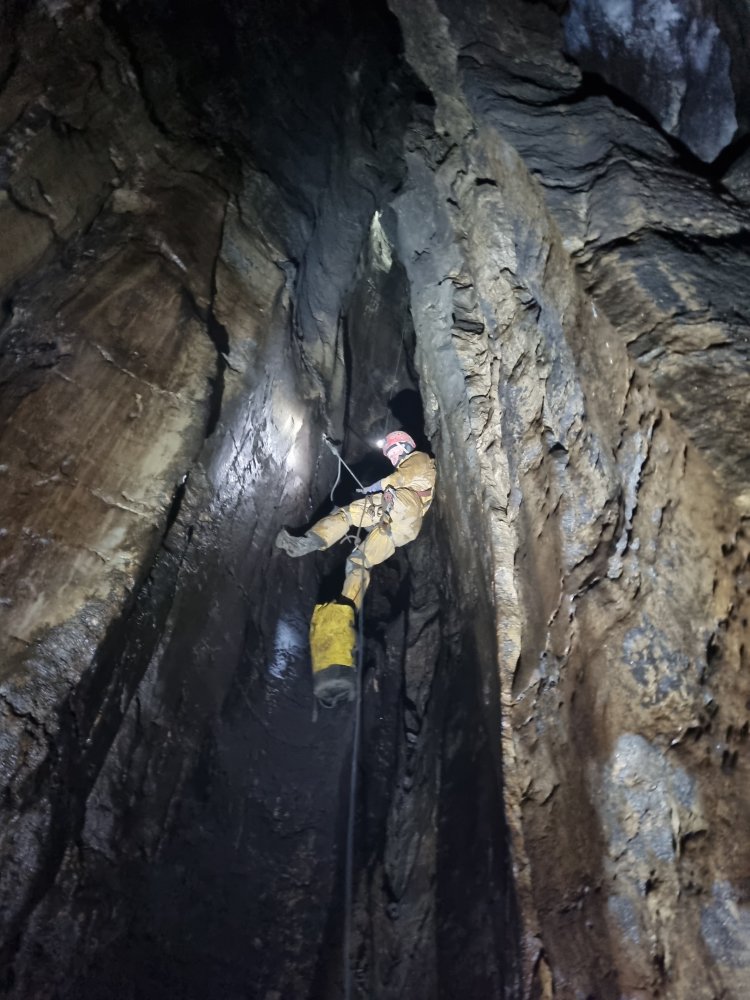 The way on - Did I mention I walked up the hill without my oversuit and caved in just a cag. 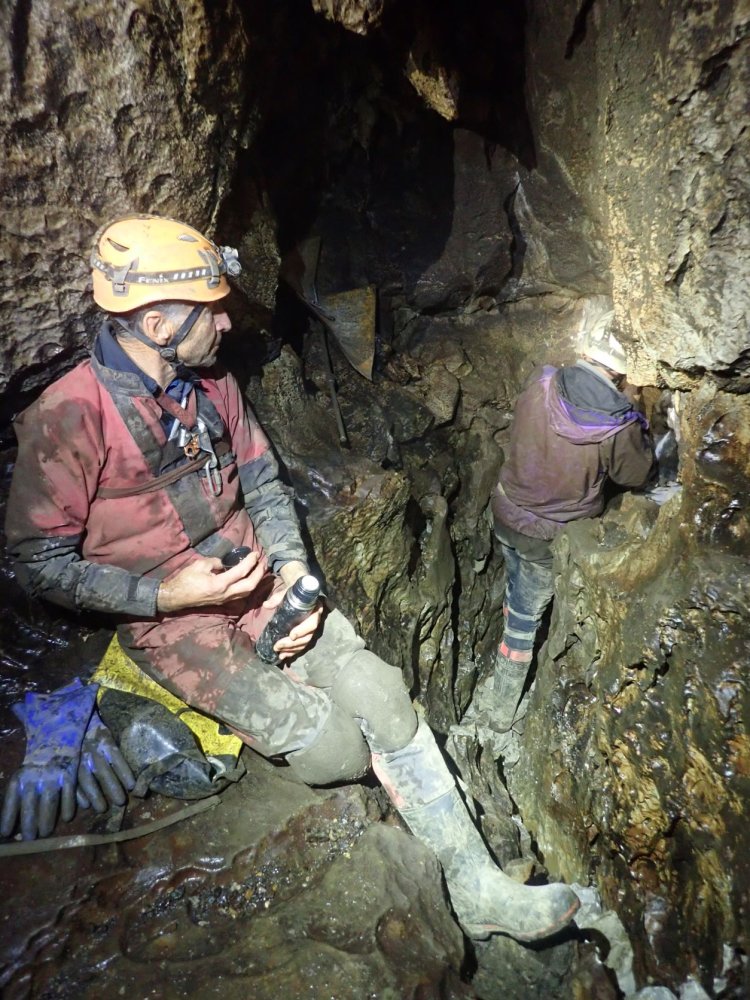 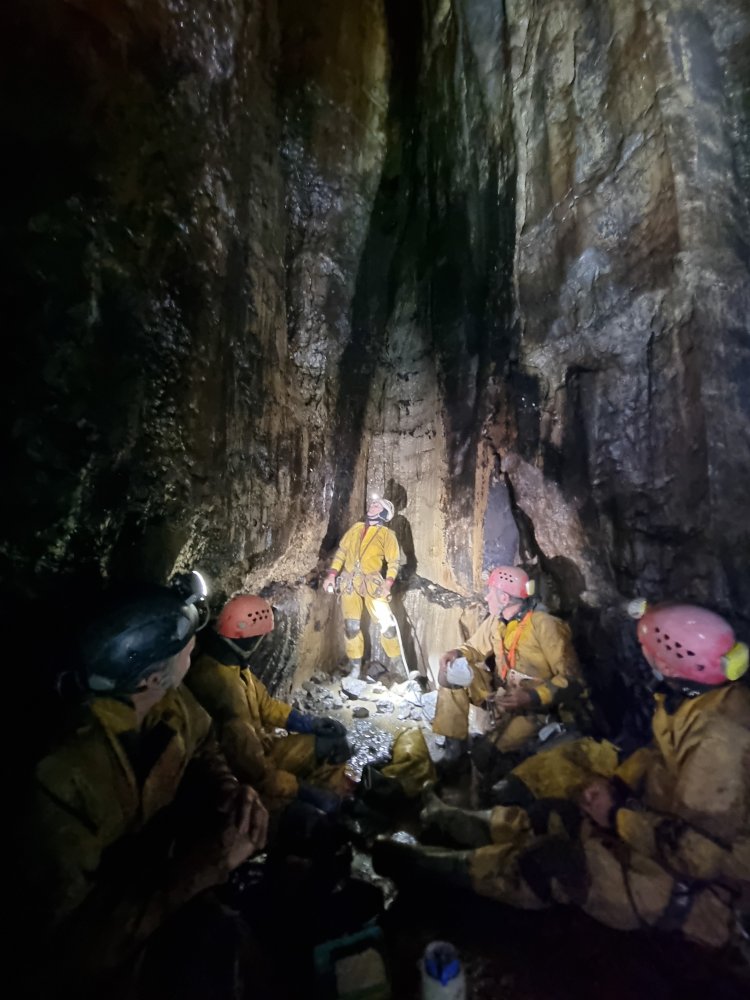 The next pitch awaits....