Mayday had become a very pleasant little SRT trip and we were soon back with another rope so that we could all reach the end. On the way in I got off the main pitch at the large ledge (as shown in the film above) and rigged a short traverse rope to make it safe. A hole in the large calcite flow showed a false floor but it only led to a boulder choked shaft to who knows where. 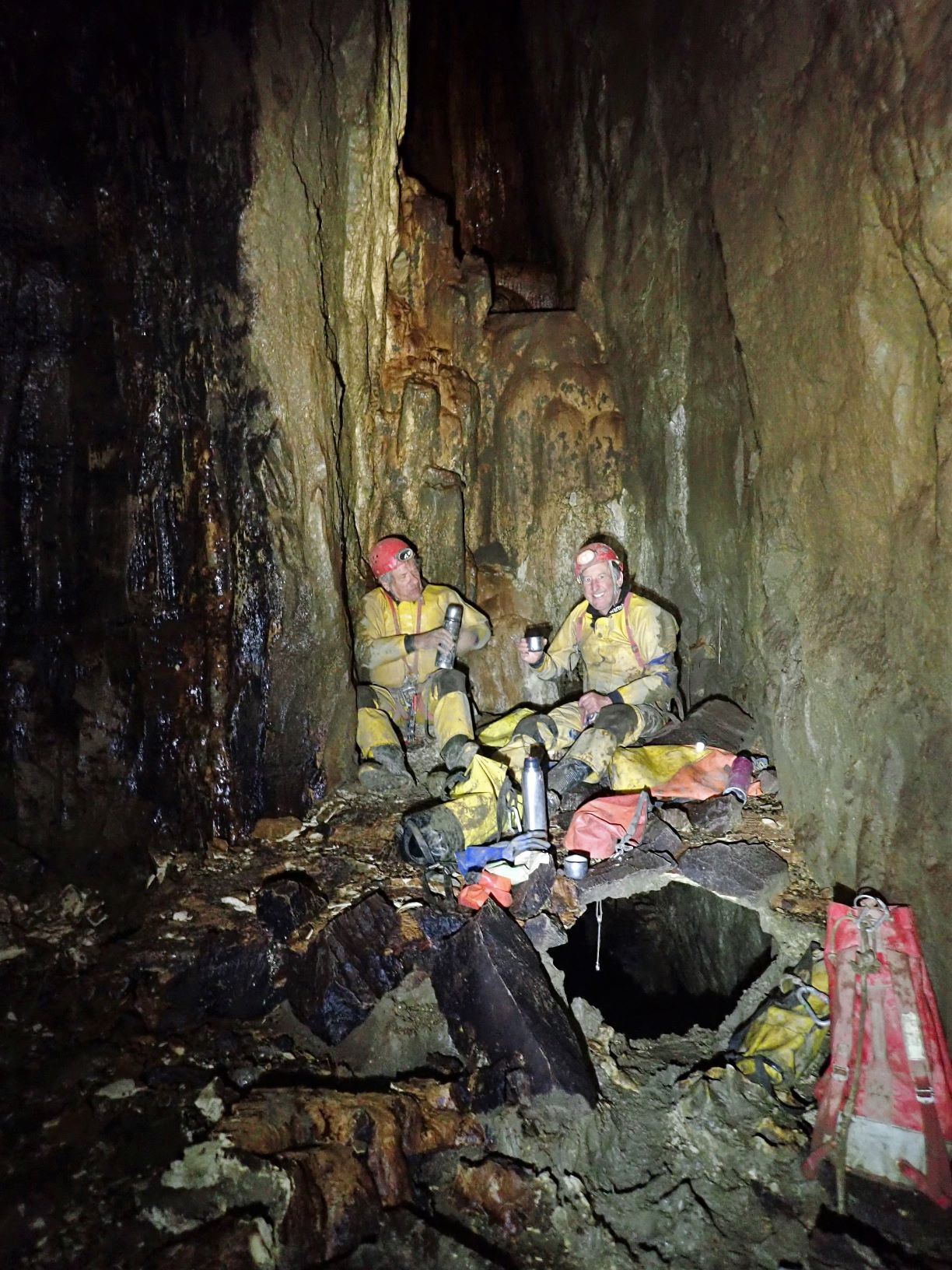 I continued down to join the others who had over-taken me. At the bottom of the main pitch gully was a flat boulder floor. Here, at head height, the famous Porcelainious Band was evident, presumably the same one that you can see in Gaping Gill main chamber. A later survey would put this almost exactly 100m below the surface. 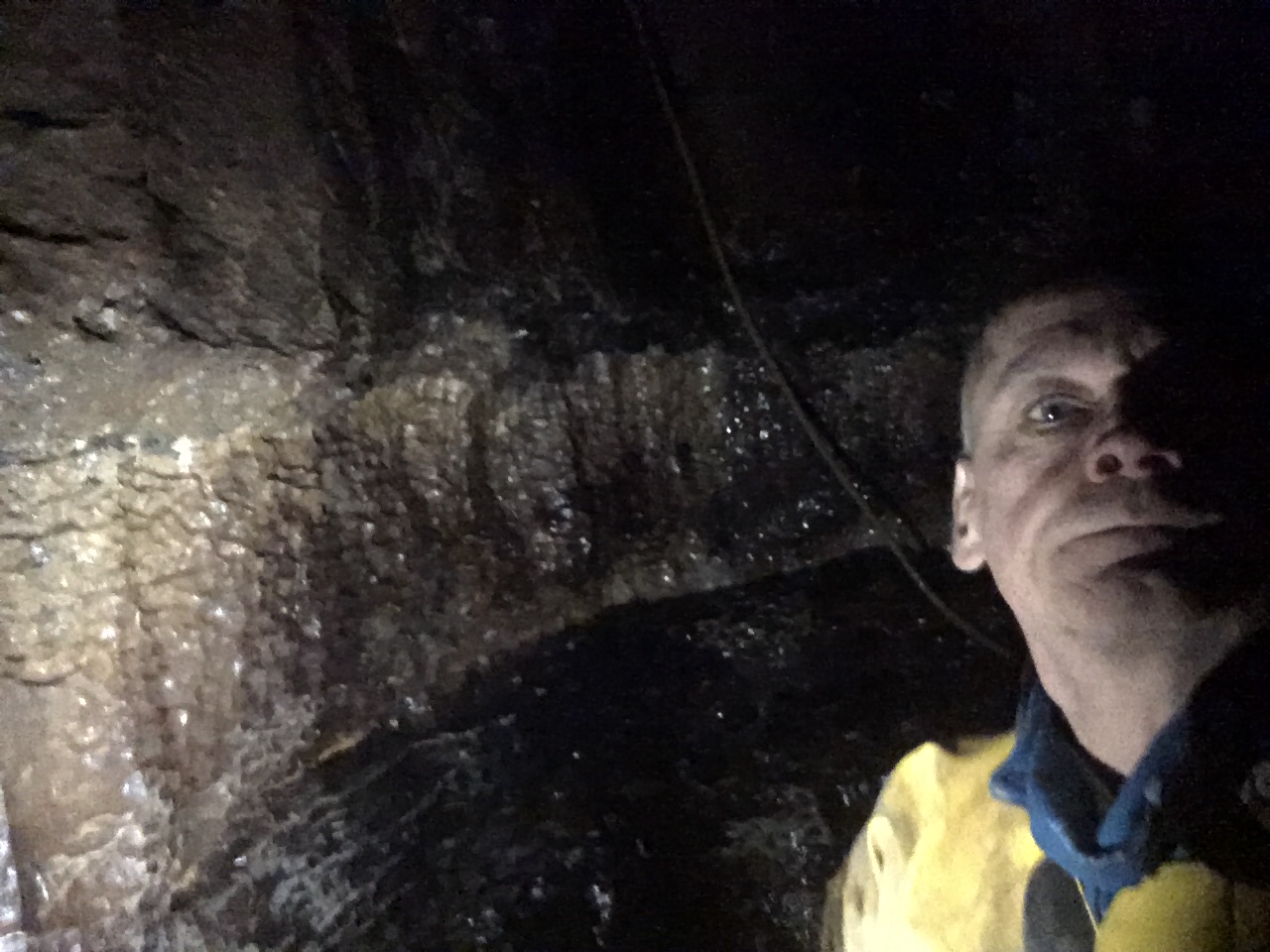 The muddy slope down to the final choke 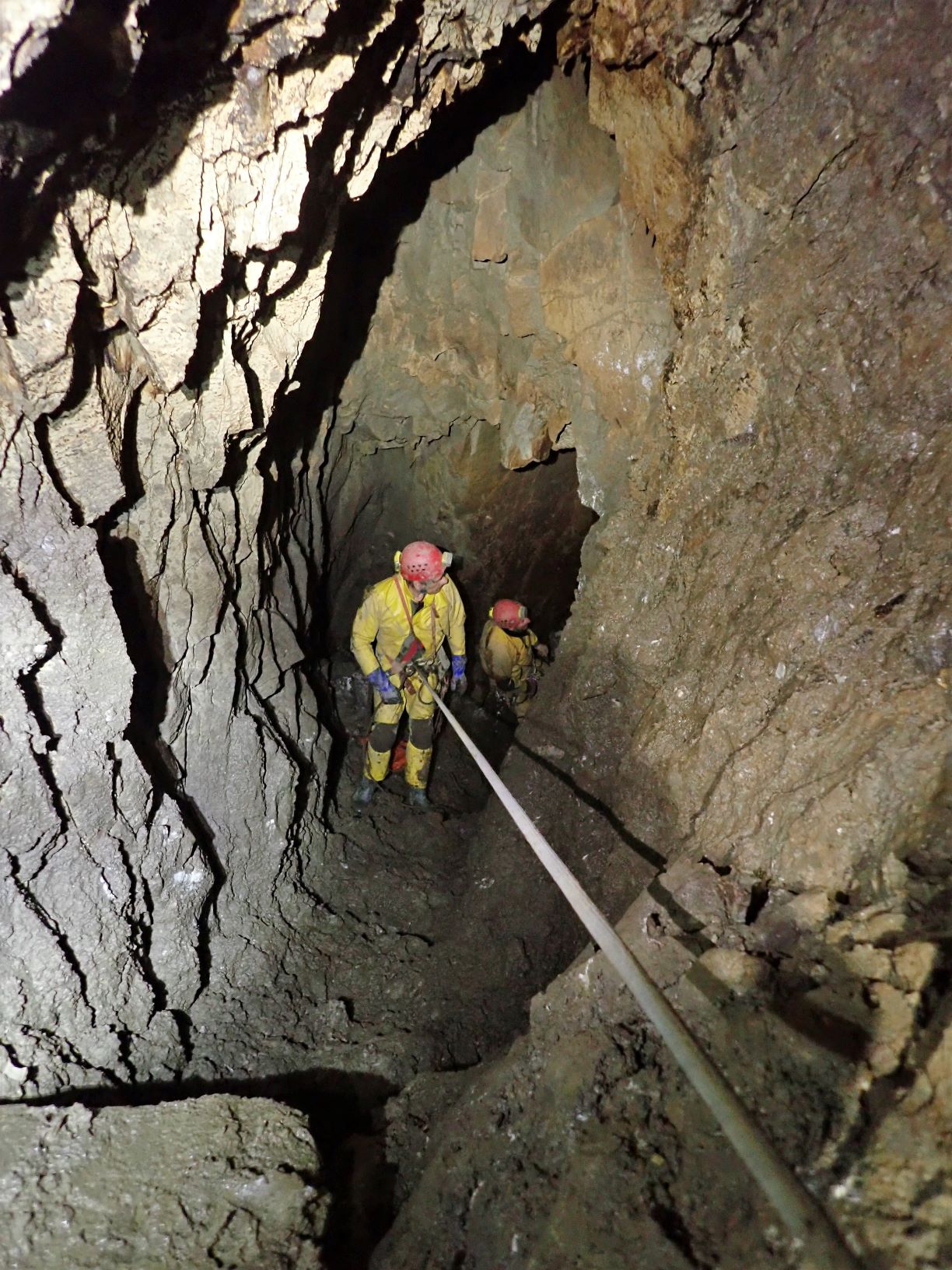 From the boulder floor a steep muddy slope dropped to the final choke beneath an inlet aven. A dig here didn?t look too promising apparently, but the team were excited about a possibility beneath the boulder floor above. Geoff was dropping rocks down a small hole and they seemed to fall quite a way as the next video shows.


A dig was started but there was a lot of mud and rock to remove. We would have to shift as much as possible and throw it down the muddy slope to avoid blocking any potential way on below. By the end of the day all the small stuff was dug away to reveal a number of huge great henrys perched over another shaft.


We returned with capping gear so that we could break up as many of the rocks as we could without the bits falling down the shaft. We rigged a traverse line to clip into and I did have a quick peek down below to assess the remaining rocks. There was going to be nothing for it but to let the last one rip. I asked Mick to wait until I gave the go ahead so that I could get my phone out to film it. His impatience is legendary and demonstrated by the fact that I only just caught it. What a moment it is though?? FFS

With the pitch now safe to descend we were eager to get it rigged.  Rather amusingly the two bolts I?d put in the far wall from the boulder platform were now almost out of reach.  The 17m descent was pretty good considering the boulders that had gone before.  They, of course, now resided at the bottom but the big one had landed well.  Off the rope, a climb down boulders of 3m led to a choke in the floor.  On a later trip we attempted a dig in the floor where the water had washed the mud away but it looked too long term.  Scaffold and shoring would be needed and there were no indications of a good way on.  We were now 120m down and perhaps 45m above the presumed resurgence at Skirwith, but prospects would be a gamble so we decided to leave the bottom for future generations and climb some of the avens.

Geoff, with Mick below, in the final choke 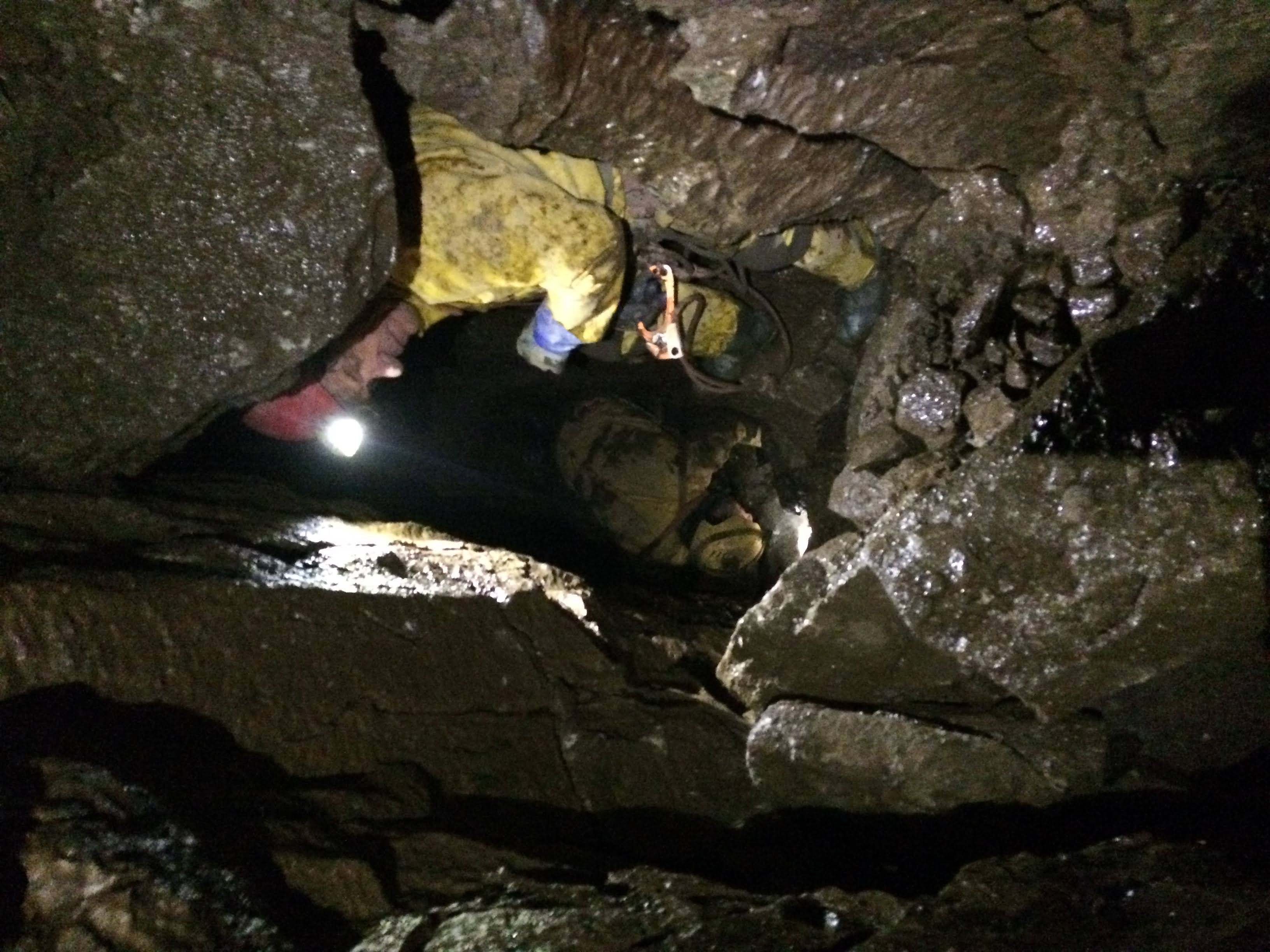 I enjoy aid climbing myself but unfortunately work caught up with me for our usual mid week trips and the hard work was left up to Mick.  Rather amusingly a year or two before, Mick had handed me a carrier bag full of his bolting gear, ?here, you have these, I?m never going to use them again?.  Too old and knackered he thought but here I was handing the very same bag back to him.  Over the next few weeks Mick climbed all the avens.

There were three sites of interest.  Two were half way down the Baby pitch and could be accessed from the big ledge.  High up to the north west there was a window/ feature of interest.  Mick bolted a rising traverse to this from the deviation.  It led to a fine parallel shaft (Lung Pitch) which re-entered the main route above Boom pitch.

Mick bolting across to the window The parallel shaft of Lung Pitch On the opposite side, directly above the ledge, an inlet entered and there was obviously something that had brought in the large calcite flow .  At the top an airy space led to two smaller avens but the source of the calcite was completely choked.

Pretties at the top of the aven above the big ledge 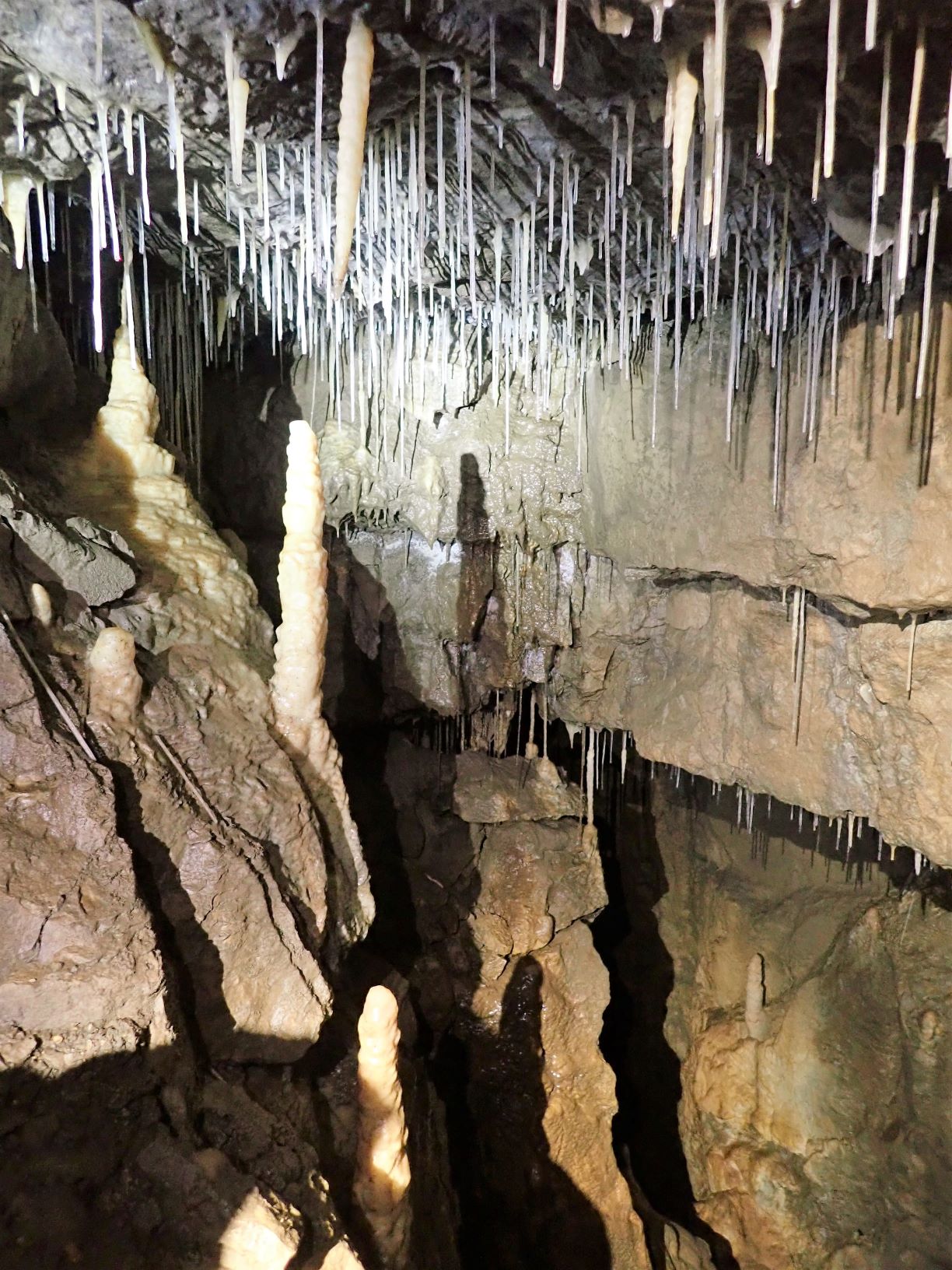 The inlet at the bottom was also climbed and led to a further unclimbed aven which was left for the next generation.  The cave has been surveyed and resin anchors are in the process of being installed.  A rigging topo will appear on the CNCC website once this is complete.

Photo credits to Frank but...  Mr Chunky has been down with his big camera which I?m sure he will share with us now my write up is complete.  It had been a blast but now the diggers have moved on to the next big thing?..

Superb account. Thanks for taking the time to write it up on here


Badlad said:
The cave is still rigged but the ropes are a little tatty.
Click to expand...

Just to keep this topic up to date, most of the ropes have now been removed (just the top two remain) now anchoring is underway, so no tackle-free trips down are now possible. As Tim said above, a topo will go on the CNCC site as soon as anchoring is finished.

It's a shame there's nothing really horizontal in there, but still sounds like an interesting cave you have found!
D

Excellent, I really enjoyed that write up. And splitting it into segments was a nice way to break it up.
Thanks!

Sent from my SM-T290 using Tapatalk

A fantastic SRT trip, I thoroughly recommend it. Many thanks Badlad for the trip and the chance to play with the camera. Below a few shots of the final pitches. 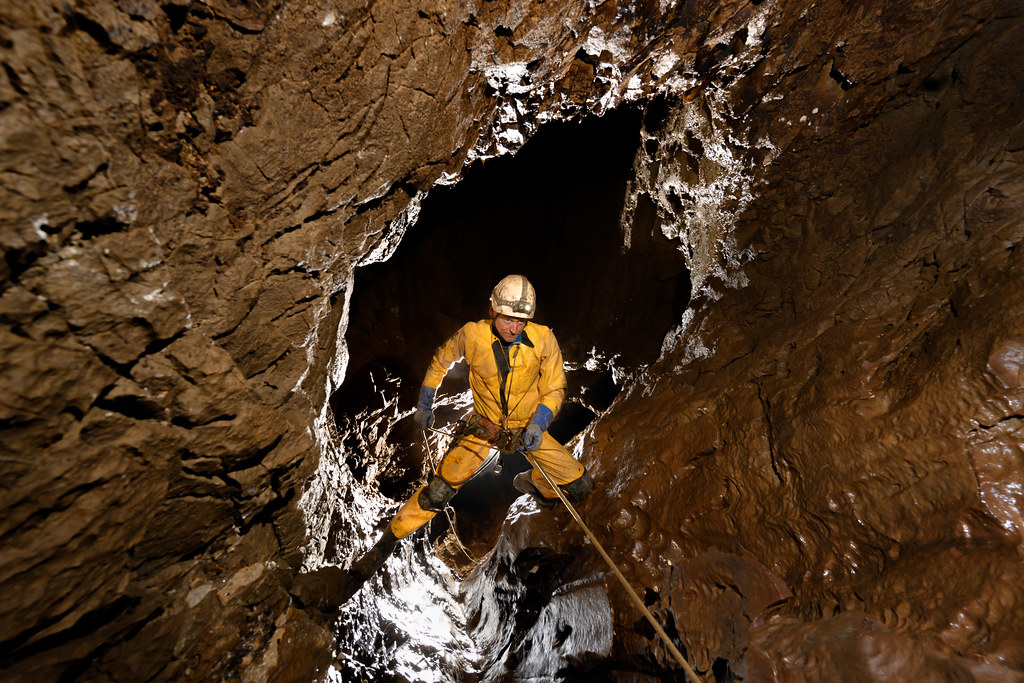 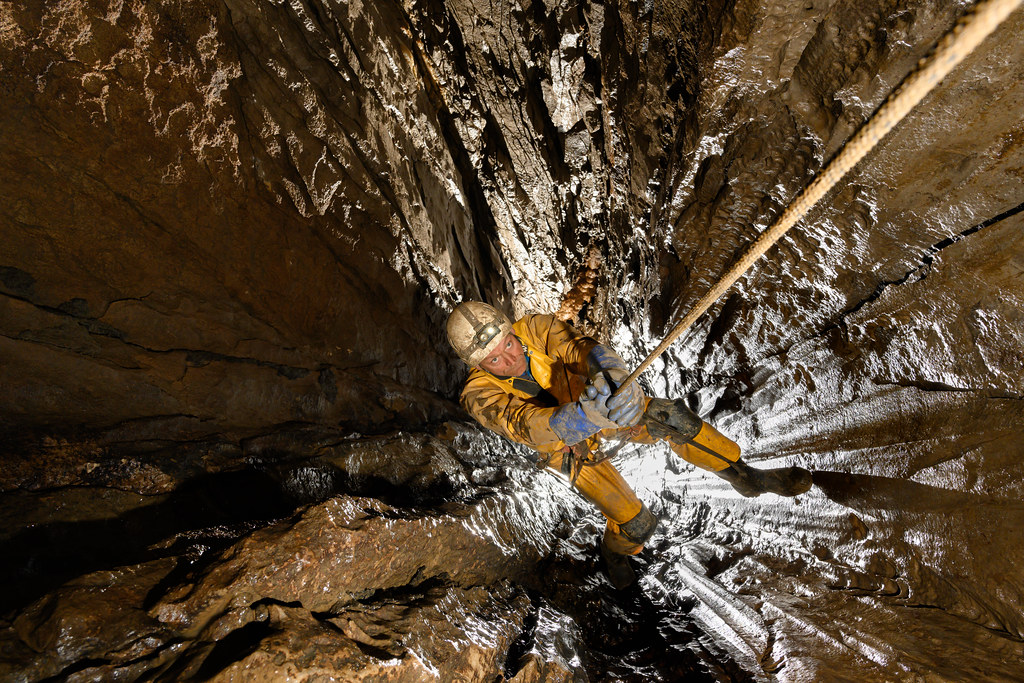 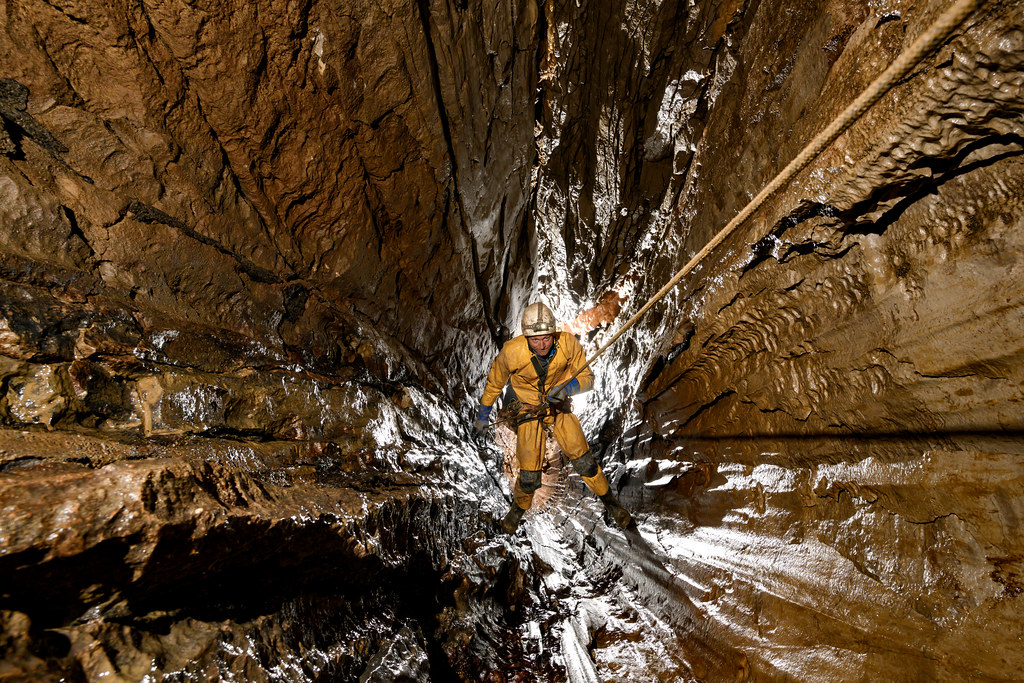 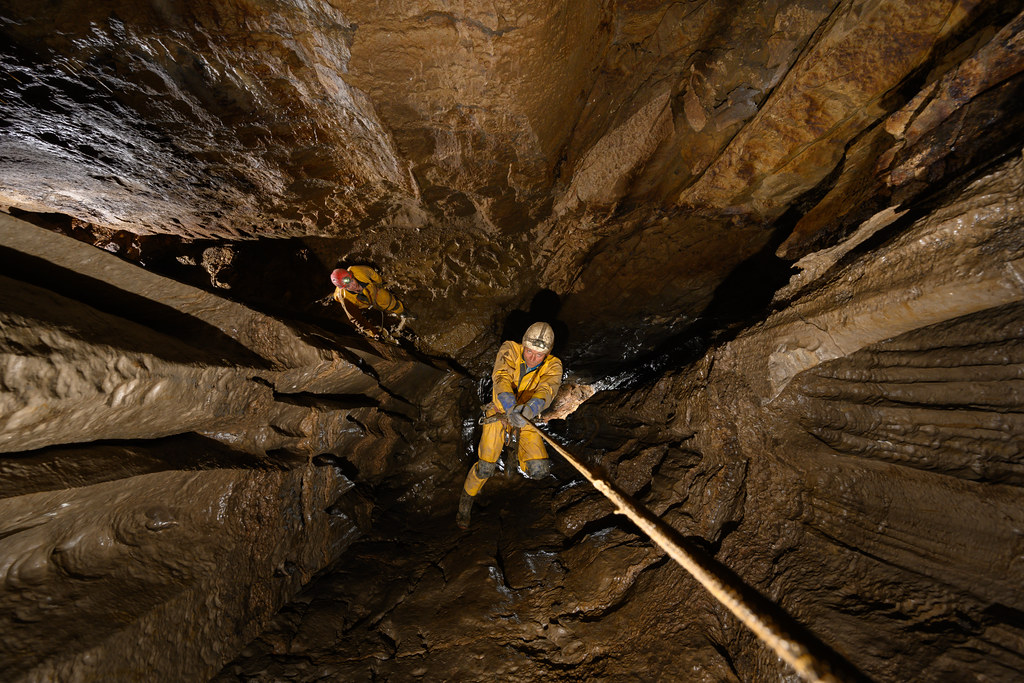 Staff member
Fab shots of both Mayday and Badlad 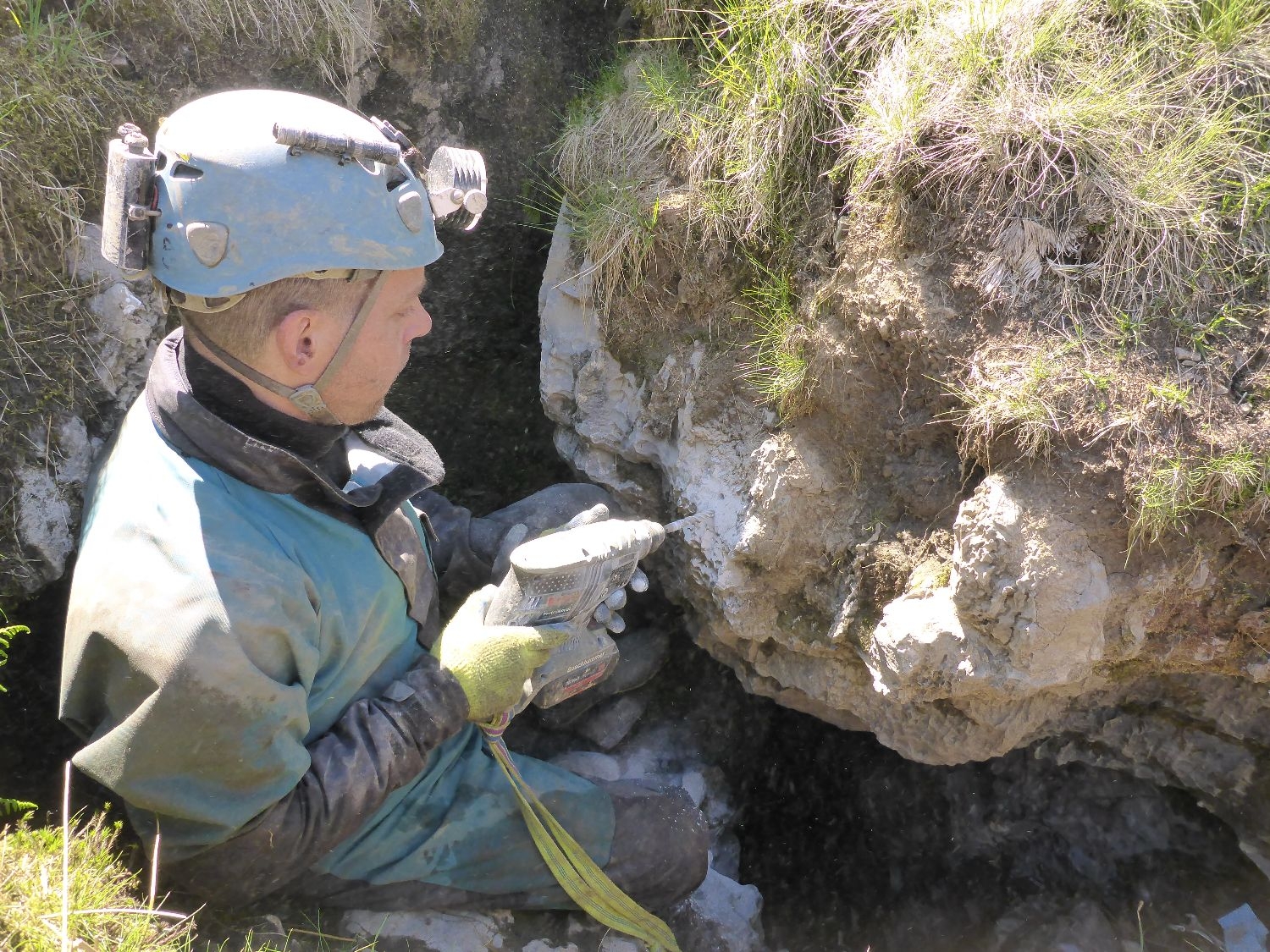 We are pleased to say that anchor installation in Mayday Hole is now complete. The anchors can be used this weekend if anyone wants. If you are the first group to use the anchors you will find each has a tag on them. Please remove the tags to discard later, and of course give the anchors the usual pre-use inspections.

Looks like a great trip! Will have to check it out,

Staff member
Came across this short film of Mayday Hole. Great to see folk down there.

We had a great trip down there just after Christmas.
A quality SRT trip just on the enjoyable side of ?awkward? in places and always interesting for the rigger.

The evidence of the hard graft involved is clearly there (and also signs of ?fun) so thanks to all involved.

Was down there a few weekends ago, and popped up that rope near the bottom up that horrible little mud slope. That aven looks interesting, can't believe you have not climbed it.

Alex said:
Was down there a few weekends ago, and popped up that rope near the bottom up that horrible little mud slope. That aven looks interesting, can't believe you have not climbed it.
Click to expand...

You've got to leave something for the next generation of explorers, Alex.  Feel free to have a go.

Hmm I don't have the gear, or experiance in doing that sort of thing. I do have a drill and access to climbing rope but have never bolted an aven.

Badlad said:
Great to see folk down there.
Click to expand...

We've been down a couple of times, Badlad, and I think that it's a fabulous trip. It will become a classic, as will Turbary Pot which was opened up at about the same time.

Staff member
If anyone reading this wants to derigg my traverse rope from the ledge half way down Baby Pitch I'd much appreciate it.  It got left behind in the big derigg and I haven't been down since.  I think there are four standard hangers and Maillons so you'd need a spanner.  It could be dropped off with Dave at Ingelsport or bringing it round here would earn you a cup of tea of course
A

Had a great trip down Mayday last night. The capped tunnel is a work of art. We brought out what I hope is the right rope - 3 bolts with a rope leading along the wall on the ledge where there's the strange hole and a surprising amount of mud. There's another rope lower down at the top of the last pitch on a couple of bolts which we left - hope that's right. Will drop off the rope/hangers in Inglesport, probably next week now if that's ok.

Staff member
That's the one.  Thanks very much for bringing it out and glad you enjoyed the trip.  All the diggers are well chuffed that the hole is getting some use.  It is quite strange how that ledge has formed.  The solid edge must be an ar?te between two shafts, one of which is full of mud and boulders.

I didn't realise there was still a rope in the bottom.  I presume it goes down the slope to the inlet aven.  It probably won't hurt there, but if anyone wants to bring that out too, please feel free.

There's also a rope going up the aven itself, though I guess whoever retrieved that one would need to rig a pull through or something after retrieving it.