Hi all. Just a heads up if anyones planning to do the through trip from Firestone level.

The roofs come down in the boulder clay section 100m inbye of the portal.
The waters currently about 2 feet above the arching where it’s known to sump, so there is currently no way of getting out for anyone attempting the through trip.

Yes, this was discovered the hard way by rescuers who did it as a pull-through, after the recent multi-agency rescue of a trio of inexperienced explorers who got stuck in the horror which is the first pitch from the D2 Vein sublevel. Even if Skears were a wheelchair-friendly walk-out it would be a hard trip - I would advise against anyone (except maybe Leif and Heb) attempting it. I opened the route and did the first Through in May 1993 with Alex F and Adam H, and again a few years later; I doubt I'd ever want to do it again.

I am absolutely clueless about this place but am interested being a mine explorer myself what makes it so hard , is it srt ? Crawling ? Or risk of getting lost .

Instability, the top pitch is a collapsing ore hopper which often needs digging out when you reach the bottom.
The lower level is prone to collapse and flooding as mentioned by the original poster.

We did it as a CATMHS trip about 10 years ago and went the week before to rig and check it was clear and the week after to derig.
Turning up and expecting to simply knock off a straightforward pull-thru can catch people out.

Thanks for the reply 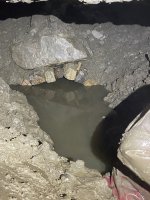 hobbitcaver said:
View attachment 14111 It’s down a little bit after a little digging but still would not recommend it
Click to expand...

Is that heading in or out?

If it's going in and the roofs going up, I'd be tempted. If it's heading out and the roof is dropping, no thanks!

PeteHall said:
Is that heading in or out?

If it's going in and the roofs going up, I'd be tempted. If it's heading out and the roof is dropping, no thanks!
Click to expand...

Needs a dedicated team to clear it properly, with full consideration for spoil removal and disposal. Unfortunately I'm committed to other long-term projects elsewhere otherwise I might have run with it myself. MARK

wow, that's a real ceiling-sucker, starting to see why it was described as NOT being an easy pull through trip

legendrider said:
Needs a dedicated team to clear it properly, with full consideration for spoil removal and disposal. Unfortunately I'm committed to other long-term projects elsewhere otherwise I might have run with it myself. MARK
Click to expand...

If you ever get round to it I don’t mine having another go at it.

Thanks for that - good to hear that someone's up for repairing and maintaining.
WRT Tomferry's comment - it is a hard enough trip without this new collapse. When you drop out of the hopper on D2 Vein you're straight into waist-deep cryogenic fluid till you get to D/E junction!
MARK
You must log in or register to reply here.
Share:
Facebook Twitter Reddit Pinterest Tumblr WhatsApp Email Share Link