WIN A TRIPOD OR A QUADPOD - IDEAL FOR DIGGING!! THANK YOU SPANSET!

Staff member
WIN A TRIPOD OR A QUADPOD!!

The lovely people at SpanSet have been Spring cleaning and found these sales samples that have now been superceded: 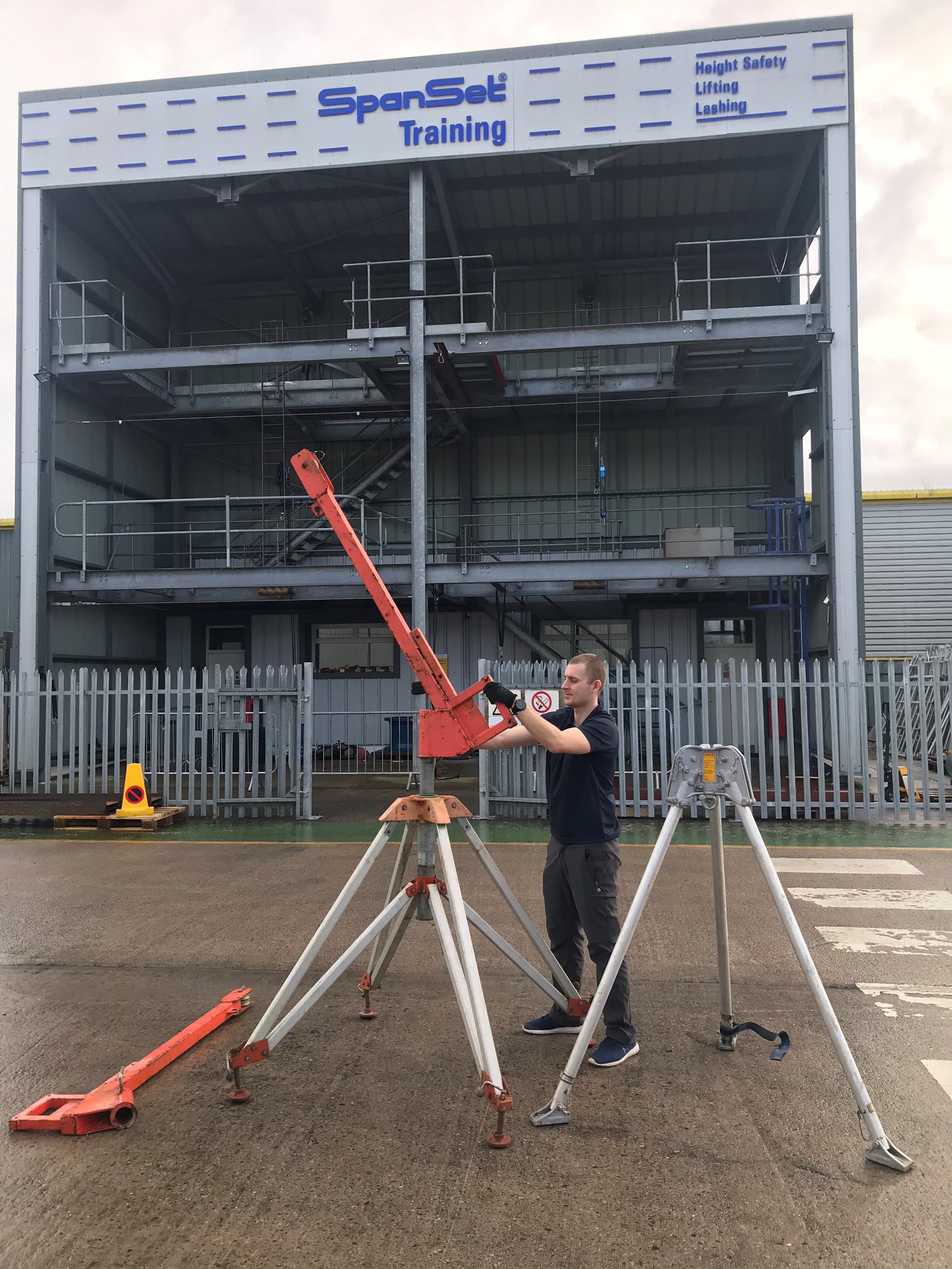 Just because something has been updated does not mean the old version has no use and so Pete Ward, caver and SpanSet MD thought upcycling might be better than scrapping.

The pods were originally designed for personnel use with fall arrest products, so if used for bucket hauling etc, then the safety margins will be very significant.

They are scruffy, but perfectly functional - The connection between the Quadpod and davit could do with a little 'fettling' to make it easier to install / remove.

They just need a nice project and a team keen to make use of them ? Ideal for surface digs or maybe a mine shaft or a longer term project to take the pressure off your back!

The tripod can be placed centrally over a hole providing an overhead pulley anchorage for a hauling system.
The Quadpod can be used similarly, but stands next to the hole with the davit extending out over the hole. The davit can be swung to the side once the bucket is hauled up for emptying.

There are two davit arms both of which fit onto the quadpod  - one with a longer reach than the other.

Pete will provide tech info and advice on looking after them plus has kindly offered to ship them, though if cavers could collect that would be marvellous.

SpanSet design and manufacture a wide range of Height Safety and Lifting equipment, so are always keen on innovation.  Therefore to enter, post a photo of your 'digging innovations' - any equipment from a trowel to a JCB that you've used in the quest to find passages measureless.  A brief tale/description would be great too.

Or alternatively, simply tell us why you'd like either the tripod or quadpod for your dig!

Wow! what a prize!

Now that is a serious peace of equipment
I would not be a popular man with the landowners near me if I had one of them !

We were fortunate when we dug open Vurley Swallet a few years ago.  In an adjacent field was an abandoned cesspit arrangement from a thwarted building project. The concrete pipes were perfect for the job of covering our putative cave (it's now 100m deep).

How did you keep that dig secret Mrdoc.

Is a quadpod a place to keep you quad

Sorry I haven?t got an actual entry to the competition.

Not secret really. There has been stuff in Descent. The problem is that we haven't made progress for a while owing to raised carbon dioxide levels at times. It still has considerable depth potential and unusually for Mendip as 4 pitches in quick succession, 11m, 20m, 7m and 7m.  Thats after a vertical entrance section through boulders and boulder chambers!  There may be more but the bottom needs digging.

The Old Ruminator sent this photo to me. We used this winder in Reservoir Hole at one stage to get boulders out of the dig to stack in a convenient hole halfway up the shafts to Golgotha. It worked a treat. It was bolted to the wall.

I rarely take a camera digging, but I have found this one from a while ago. Not as innovative as mrodoc's submissions, but a bit of conveyor belt rubber makes a huge difference to the effort needed to haul tubs and also means bags can be dragged loose without ripping apart.

I'm sure I have a few more relevant pictures somewhere...

I am glad someone else has posted!

We could use such a tripod in one of our dig sites.

Photo 1 : the project where we could use the tripod. Currenlty -3.5m deep.
Photo 1 : One of my favourite dig photos. Find the 2nd caver and hamer in the photo. Photo taken in the connection dig to enter the underground Rigotte river in France

Thanks for posting my image Mr.O'Doc the mods rightly tell me that I should have taken ownership of it myself which is what I shall do leaving me two more entries.

This is " The Ferret ". It was used to confirm that open passage lay at the end of that horrible slime tube " Potter's Heaven " in Reservoir Hole. It's a video cam and light propelled on a wheelbase that feeds a signal back to a monitor. Its propelled by drain rods. Ultimately a small rift chamber was entered, never named, and never returned to.

This is "The Egg Timer" in Vurley. Horribly unsafe but now stabilized. First scaffolding and props were put in then additional caged gabions with more scaffolding and props and a ladder. We have used about 100m of scaffolding some 60m donated. The cages were made from offcuts from those fences you see now at sports grounds and schools. Most donated. Vurley hit solid rock at 66 metres depth then opened up into a large vertical cave of four pitches. Possible total depth here attained looks to be close to 150 metres  with possibilities beyond. Sadly the cave has suffered from high CO2 levels so digging is on hold as is the survey.

That's my three entries which leaves Mr.O'Doc room for another go.

Contrary to general belief even at my advanced age I am still around and would be actively caving every Tuesday with the rest of  "The Tuesday Diggers" if C-19 rules permitted.

As to the wondrous prize on offer. I never win anything in competitions so it would be a complete surprise to get anything now. However, we have a proposed surface dig which initially requires the removal of some very large boulders and such supporty things as offered would be exceedingly useful. ( Also save me from further fractures and crushed portions of my anatomy in the removal thereof. )

I wondered where my loft ladder went! :

Again, not much innovation here, more of a "spot the cave"

We managed to double the length of this Cotswold slip rift (to about 40m) with a little digging, but I think that's probably it for this one. More to go at in the area if you like loose boulders and I'm sure a set of legs and davit would be put to good use.

Credit to amw for the photo.

I'd like to enter the tunnel ring segments in the entrance shaft of Illusion Pot. You can see them in this video (4:05 - 4:20):

They came to us as surplus to requirements from a tunnelling company called Donelon's in Bolton, who my then lodger (later to become my brother-in-law) Ben Whatley worked for at the time. Bob Mackin arranged for someone based in Ingleton who had a 7 1/2 ton flat bed to go and fetch them back to the Dales and then another neighbour who had a 4WD Thwaites 3-ton dumper shifted them from the road across the fell to the entrance for us. I can't remember what they each weigh but it must be in the region of 100kg. They were lowered into the hole using ropes and a descender.

This is " The Ferret ". It was used to confirm that open passage
Click to expand...

I was wanting something like that for the old Blackrose dig, Lower Arch Cave stores common. It had about 3 inch diameter size tube going off in the sand, but it was slow work as I could never get anyone to come with me I gave up in the end. A quick visit 10 years later shows that the dig face has slumped which was the other issue, every time it re-surged it would fill up the passage with sand again. One interesting thing though after that 10 year visit, I noticed calcite had started to form on bits of the cave floor, that certainly were not there 10 years earlier. I wonder what the formations will be like in another 10 years?

I could "dig out" the photos (see what I did there) but I have no use I can think of for the Tripod, I mean the only tool I had for that dig was my childhood spade I had when I was 10 to dig holes on the beach. I have more stuff now, but I don't exactly have any other sophisticated digging gear. So that tripod would look well out of place with my red plastic scoop of a spade.

We'd had a "dig bike" for some time however we decided that we needed a more over-engineered option as we realised that, on the old bike, the only thing stopping the bucket falling back down was a flimsy old chain!

Mark II was developed (cobbled together) by one of our digging group. The new bike features a ratchet and break operated by the existing two bike break leavers. It's been invaluable to haul out all the sloppy mud in the North York Moors digs!

In the spirit of "simply tell us why you'd like either the tripod or quadpod for your dig!"
Around Matienzo in Cantabria, we have catalogued over 1500 digs that need work. Either device would aid safe working, hauling boulders and buckets. The Spanset name would get some publicity on the Spanish caving / digging scene and a tripod or quadpod would save saplings!  Young trees are often cut down to make a hauling tripod.  :spank: (Photo by Phil Papard)

Another digging bike (with drip protector!):

Is that Water Bicycle Paul? Op Mole gave it that nickname after Jim Roberts tested out his rope climbing bicycle there in the 1990's.

The tradition, it seems, goes on.