Unfortunately, my hopes for more camping were thwarted by some untimely catching of covid putting me out of action. On the tail end of my covid recovery I was desperate to get back underground and managed to argue my way onto the final camp trip of expo, insisting I was well enough for the trip.

After what felt like a very long week at base camp, I was very excited to be going caving. Jono, Charlotte and I packed our bags and headed off for Balkon. It was Charlotte’s first camp trip and her first time down to this area of Balkon, so I pointed out the sights along the way. We got down to camp in reasonable time so dumped kit and headed on to Southern Pitstop for a few hours of pushing before dinner. None of us had been there before so it was something new to the group. We surveyed around 100m of easy horizontal passage, naming it Covid Corner after my recent affliction. Charlotte and I surveyed the traditional way whilst Jono 3D scanned the passage, with the aim of later comparing the two results. At the end of the passage, we reached a drop down into a rift which required rope and as we had left rigging gear at camp to travel light, decided this was a good time to return for dinner and bed. 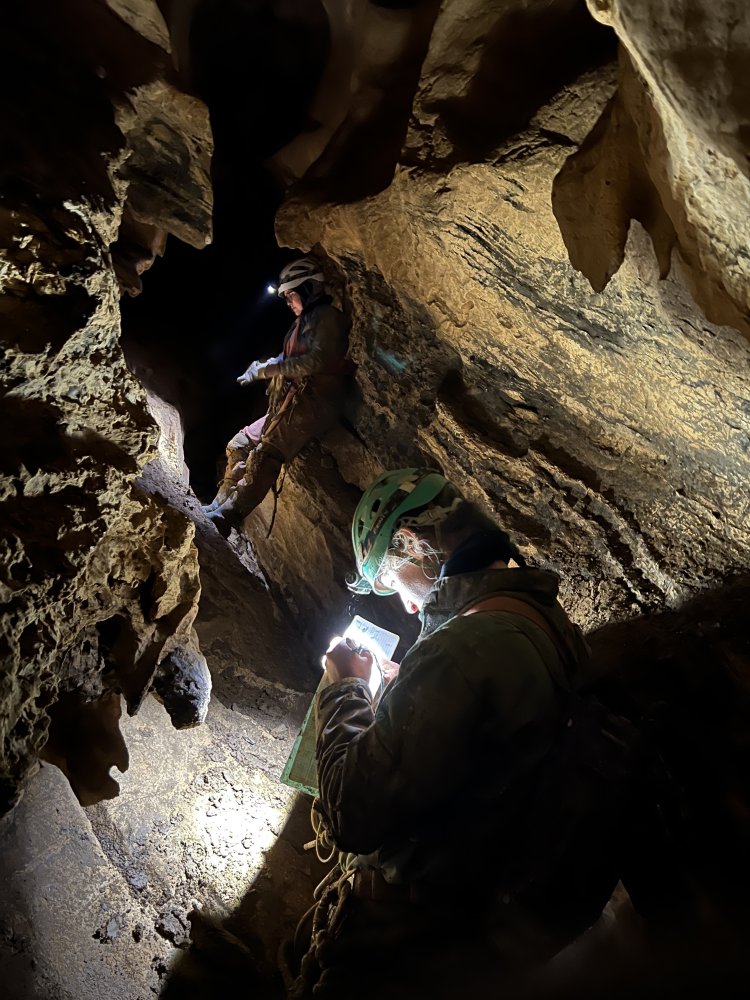 The next day, after a slightly slow start, we set off down Northern Pitstop for the pushing front beyond Tartarus, which was now turning into a considerable commute from camp. Since my last trip, two camp trips had been down Balkon and Ichthyes (one of the new sections found beyond Tartarus) had some promising leads, so this was where we headed. A little confusion was had finding the pushing front, in which Charlotte, as the smallest person, was sent first down a swiftly narrowing rift; a climb up out of the rift revealed the much roomier way on. At the pushing front a very pretty area of formations was reached with a high wall of popcorned stals. To begin with we followed the passage straight on, which quickly led to an awkward and unappealing thrutch up a boulder climb, opening onto a pitch head. Feeling uninspired we retreated to an A lead, which was a 7m climb up on our left. Jono volunteered to tackle this as a bolt climb, as it would’ve been an exposed free climb. I expressed some concern for this plan as it was his first time bolting but success was had, and Charlotte and I were able to follow up. Horizontal passage was reached above the pitch, with two pools in the floor and the sound of water nearby. Once again, Charlotte and I surveyed with the Disto whilst Jono did 3D scanning. The passage was intersected by a trench with a large passage above off to the right; this would be a potentially challenging traverse to pursue so we continued straight ahead, following the draught. Further on we reached a junction with lower and higher passages both leading into the same rift, and with a good draught this presented a promising way on. However, aware that we had to derig Tartarus on our way out, we ended our day here and returned to camp, leaving this as a promising lead for next year. This new passage above the up pitch was named Cerberus, once again continuing the Greek theme. On our way back Jono fettled his earlier rigging after some constructive criticism from the group. 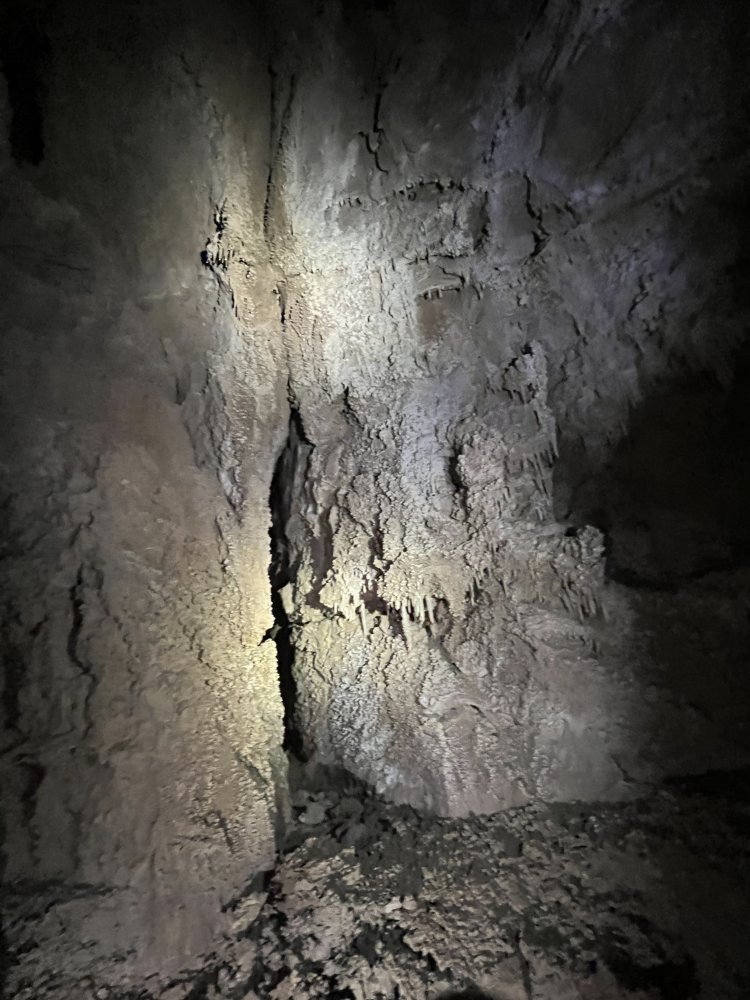 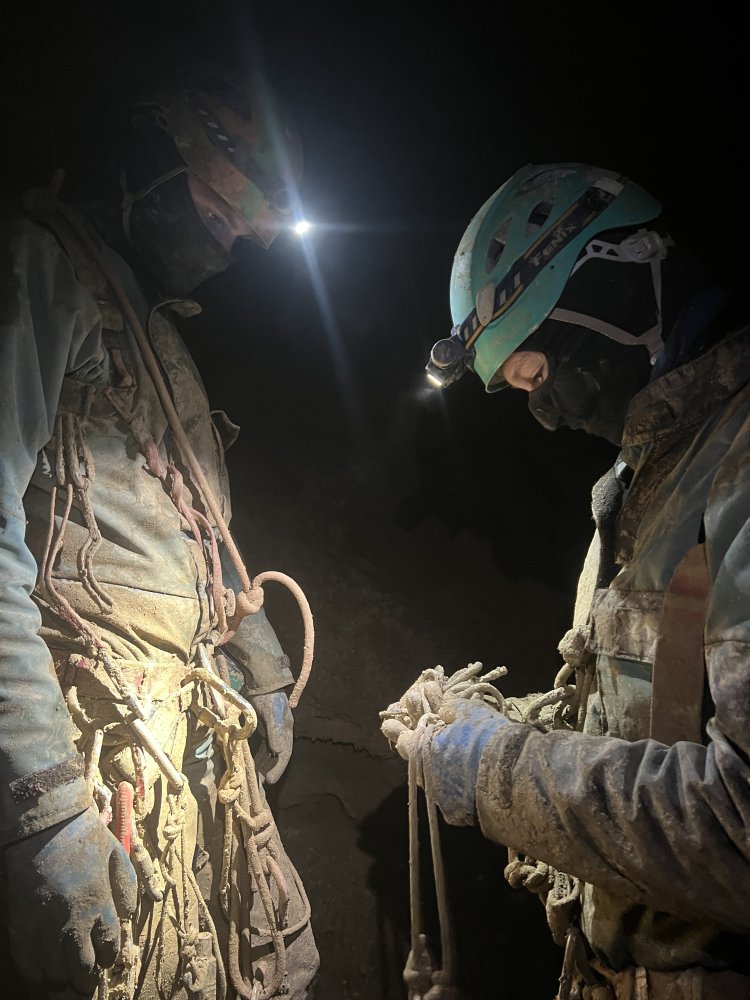 Left: Area of formations at beginning of Cerberus. Right: Bolting lesson at bottom of bolt climb.

Back at camp we made a strong effort to eat as much camp food as possible to reduce the amount to be carried out, including a struggle to consume a vast quantity of smash. The next day a reasonably early start was had to pack up camp, and despite another meal of mass smash consumption we failed to finish all supplies and resigned ourselves to carrying the remaining food out.

With camp packed up, we started the long, muddy slog up Mongol Rally, weighed down with camping kit. We met the first wave of the de-rig team at the top of Mongol Rally and the second wave shortly after, at which point came the very welcome offer of help with bag carrying. We made it out just in time to catch the last light of the day, which was very welcome after two nights underground.
B

Expo was winding down when the long-awaited rain hit. We left it 24 hours, but by then time was running out, so the final few cavers had to head up the hill from Base Camp for derigging. 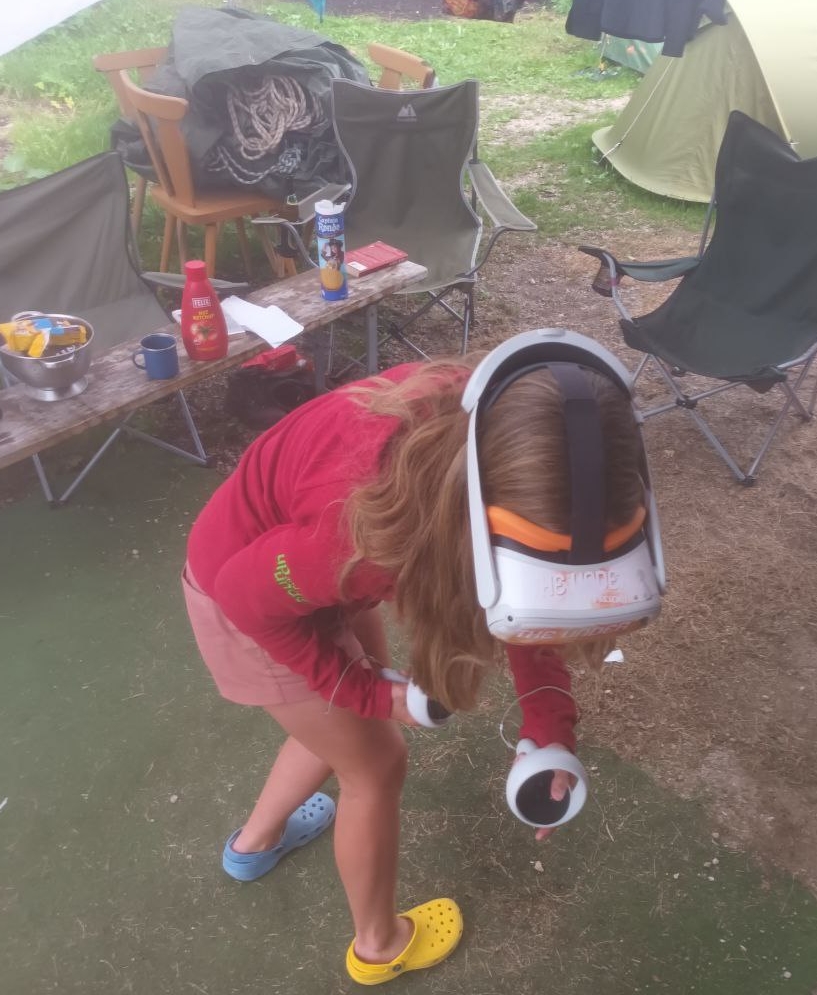 I was on the final trip into Balkonhoehle - we sorted out the rope that was to be left in for next year and took out the metalwork, etc. Meanwhile, Hannah and Nat went for one last, cheeky push into Fishgesicht to continue the massive shaft, Perseid Showers, that, after two trips, was still only partially descended. However, halfway down the rope, Hannah found it too wet to be safe to descend further, so she returned to Nat (who had chosen the noodle-preparation job rather than the checking-out-the-thundering-abyss-which-definitely-doesn't-need-two-people job) and they came out without having been able to either push or derig.

Unfortunately, this meant that we were now behind schedule and there'd need to be another Fishgesicht trip the next day. Expo energy was waning and, far from fighting over who'd go on this plum exploration-then-derig trip, there was little enthusiasm from the four remaining cavers. Nat said that, if necessary, he'd suck on a wet teabag and force himself to go. Hannah, likewise, was prepared to do it if there was no alternative. In the end, Jono and I volunteered, leaving them to pack up Top Camp. 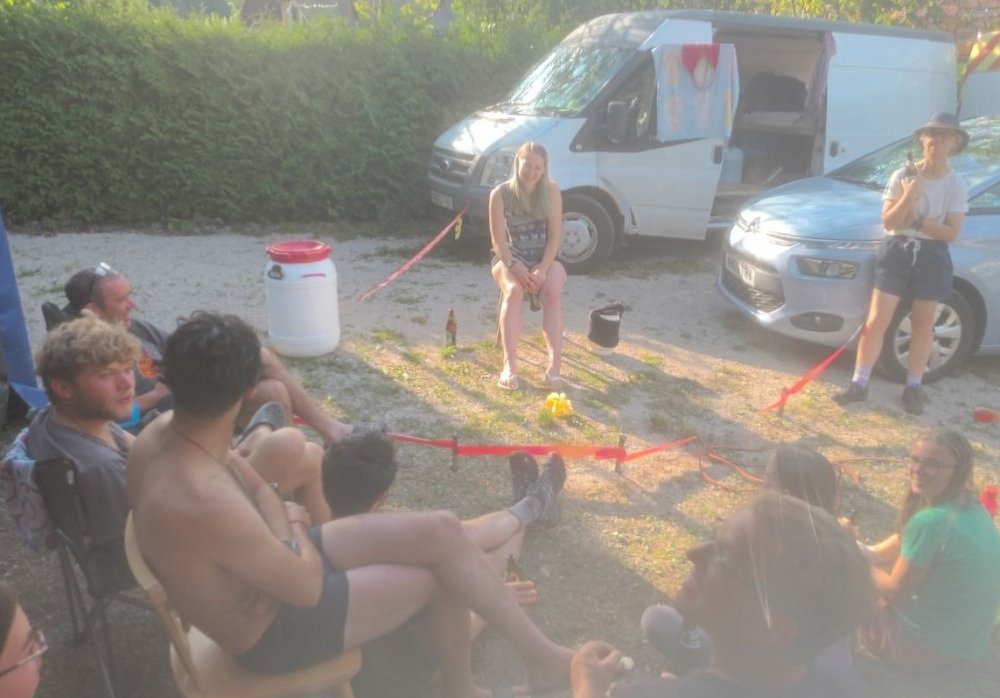 To our frustration, both Hannah and I caught COVID on Expo and we each had a week stuck, waiting it out, at Base Camp.
Here's Hannah in her COVID-corral (fenced in with our expensive reflective tape, grrr), with Tess on patrol.

Jono hadn't been to Fischgesicht before, so he enjoyed the attractive (mud-free) pitch series interspersed with short rift sections down to the final, impressive 70m hang. Most of the 2022 finds had pushed the extensive horizontal level that fans out from the base of this pitch. Rather oddly, though, nobody had tackled the monster pitch that lurked directly under it. Eventually, Nat began rigging down it, descending 100m with plenty more black space below. We named it Perseid Showers after the tiny shooting stones that rained down from the prussiker above - though the showers could also refer to the many inlets that pour in after rain.

On the second trip to Perseid Showers I'd returned along with Gwen and Dinny. Gwen gamely set off down for her first go at bolting whilst Dinny and I shouted advice from the pitch head. It was a really intimidating place to learn to put in thru-bolts. It starts with a step straight out over a sheer edge and the pitch is not only deep but is also hugely wide, with high avens, multiple, parallel windows and a powerful draft pumping up out of who knows where. Between us, Gwen and I improved Nat's initial rig, then we tried to descend further. Unfortunately, we were largely foiled by there being far less rope than we had expected in the bag at the bottom, so we could only add one more rebelay.

Now, on the third rigging trip to Perseid Showers, Jono and I had the final chance of 2022 to bottom it. We picked up a new rope, drill and rigging gear and cautiously headed down. I've been flooded in Austrian caves several times before and I really didn't want it to happen again, especially with only two other cavers left on Expo. Compared to the peaceful, slow drips of my previous two trips, which had been in drought conditions, the pitch now sounded scary, with multiple inlets feeding in and a fine spray filling the air. However, when we got to where Hannah had turned around the day before, it now looked like I could stay dry by bridging out away from the stream. The ledge below was damp, but the main streamway came in at the far side of the ledge where Gwen and I had, fortunately, re-rigged the next rebelay. We descended another spray-filled couple of rebelays which, nevertheless, remained well away from the main water spout. Finally we got to the Y-hang bolts that I had put in on my last trip with Gwen but that I hadn't had any rope to descend on. I quickly rigged them to let me drop to the big ledge that we'd seen from far above. There were two ways down from here. The right one looked wetter, with chossy rock, so I headed left and put in a short traverse to try to drop inbetween the two streams that were flowing. This got me down to another large ledge and this was just 20m above a bouldery floor - so near - but, argh, the knot at the end of my 70m rope was dangling at least 5m above the floor - game over.

Jono had been gamely insisting that he wasn't cold but he must have been relieved to get the short survey over and done with. The ledge I descended to is ~150m below the pitch head so, with the undescended drop below it, Perseid Showers must be at least 170m deep. If the boulder floor that I could see below me leads immediately to another drop (it looked like it did but I couldn't throw rocks far enough to tell) then it could be substantially deeper. I then derigged the 70m rope and headed up with the drill, etc, whilst Jono derigged the remaining ~200m of rope. Next, we spent a long time prying apart the knots to leave the rope neatly chained at the top. At last we could head up with the metalwork. En route we derigged the few pitches which either had muddy rope or which might get wet. After 14 hours of steady effort, we got ourselves and our four bags out. We decided we'd done our bit for the day and left the gear at the entrance and slogged the 45 minutes back to camp for a 3am curry and bed. 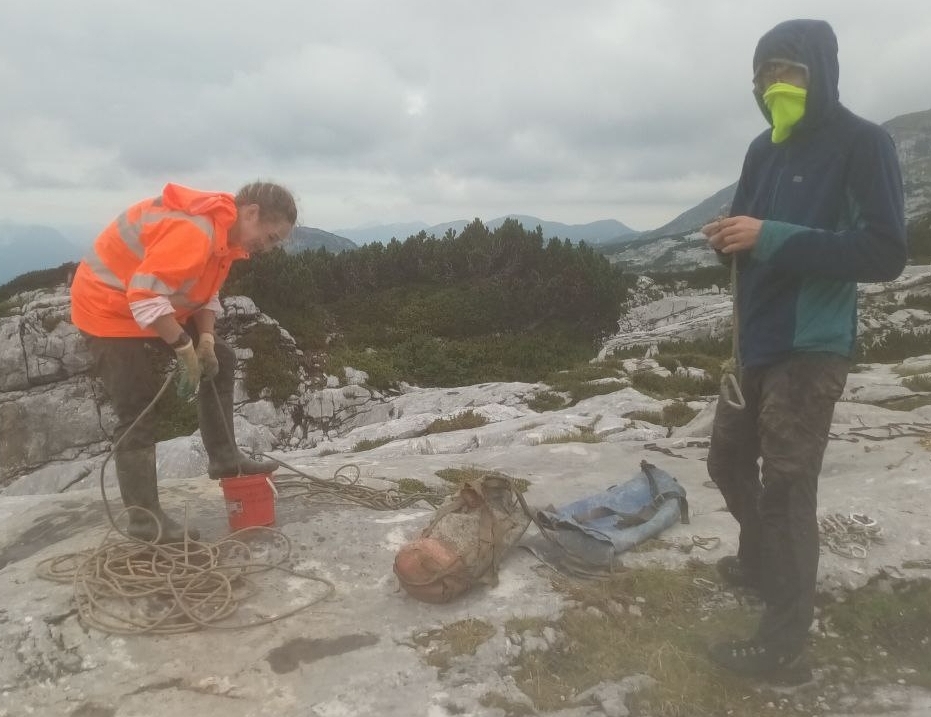 Hannah slaves away, rope-washing in a teeny-tiny bucket, whilst Nat fiddles with one of our many, poorly-sized donkey's dicks

Whilst my writing endevors this year have been lacking by far I have turned my efforts to a more visual medium. Here's a video of the resurveying trip to Nothing to See in Balcony which when first explored in 2017 had such a poor survey some of the survey team refused to hand over the notes in shame.

Armed with a crack team we descended Balcony to tackle this "suspended swiss cheese of mud" and I recoded the faff along the way.

"Well, I've enjoyed reading your reports, with a certain sort of nostalgic envy, what with my being 'too old for the sort of thing'! Anyway, good luck to you all on future expeditions."

on the Dachstein site . . . the same goes for you guys.

Yet another video. Lessons learnt from the last attempt I set off with a new camera angle and much more commentary to document the very important role of derigging.