Here is my trip report that i posted on the eldon website. Thought id put it here too. im keen to know if anyone else is going into cussey other than us

*straining noises* I am about to blow a hernia, why on earth are warmbac wetsuit ankles so difficult to get on? The sense of being close to bursting a blood vessel as I try to get my arms in is more than a little exciting. Thanks to the quite frankly ridiculous rise in cost of fuel I haven’t been able to join the team for a trip in what feels like forever. We smashed a pre cave donut and headed to the cussey lid. As we climbed up the very short steep mud bank, Rob; one of the most capable and elegant cavers I have ever met fell flat on his face. Rob had forgotten his wellies and was finding out quickly that his trail shoes were not as grippy, this is going to be fun. He opened the lid, it never ceases to amaze me the strength of the draught coming out of cussey.
Rob, Dylan and I made very quick work to the base of Inglorious where we stashed our SRT kit into Rob's bag and slid into loper lust. Last time I was in here it was a thick sticky gloop that wrestled you into the floor, but this time, thanks to the sustained dry weather we have had, it was bone dry and we passed through quickly.
*Boom* “oh shit” came the echo down the passage. The strap on robs bag had decided enough was enough and sent our kit down to the bottom of the ladder. “give me a minute” Rob said as he raced down. I looked over the edge to see his light at the bottom illuminating just how much of a bend this ladder has. Note to Jon (because he was washing his hair tonight) – this would make a great photo if you haven’t already.
This trip is a trip of two halves. Up until this point I find a wetsuit so so hot and uncomfortable, but from now onwards I love it so much and would not be without it. And so before I know it we are at the point of where I popped my cussey cherry, Vulgarious. The most hated section by the team. I however love it. I am literally a pig in shit at this point. Just accept the mud because you are not avoiding it anymore. We begin on our hands and knees up to elbows before dropping into a flat out crawl. This was wetter than I have see it before, head turned to the side and half in water I would reach forwards and gently pull so as not to cause too many waves, gliding through this section I catch up with Rob.
It is rumoured that Hobgoblin is the only thing he will drink, however I found where his true powers come from as he was drinking the magical stoney elixer from the small waterfall at the beginning of For Bucks Sake. This section is now like one of those airport travellators. Sloppy, but one push from the toes and you slide for a metre or so. Water levels at the breakthrough point were low and so passing through was easy. What follows is the deepest sludge ever and its hands and knees crawlling, so its quick draining work.
Shortly we make the sump. I had not done this sump before and my only experience of passing sumps is swildons sump 1 which is very short. Rob explained the procedure of getting through and signalling to the next person. It was very cool to watch his helmet disappear under the water line. Between 10 and 20 seconds later the rope pulled tight 3 times. That was my signal. “enjoy” said Dylan as I slipped into the water, dam its cold. I hate cold water with a passion. Gradually the wetsuit did its job and my temperature seemed to equalise. Its a strange feeling that follows. I know its safe, Rob has just got through, others have got through a number of times, and yet because I have no reference on what to expect, there is a moment of apprehension. I took a few small breaths, then one big one, pushed my head under and commited. Pulling on the rope my helmet hit the ceiling a couple of times and then before I know it I felt the bolt at the other end of the rope. Cue lots of whoops and cheers from both Rob and I. He is always genuinely excited and encouraging and it was a great experience. This sump really changes the nature of the trip again and makes it feel end more “proper”. 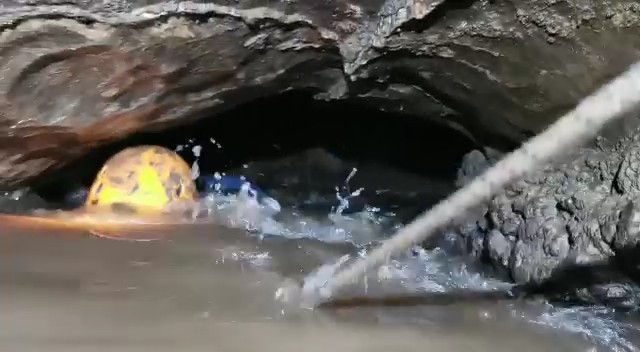 “you could have popped up a lot sooner” rob laughed, I looked back to see that there was an airbell behind me. I gave Dylan 3 tugs (this trip was full of innuendos) and he came through with an equally massive grin.
Now, if you go left before the sump and head off down Race Against Time, it is incredible, but if you go through the sump into the master cave, it is even more incredible. The streamway is huge, and doenst close down like race against time, infact it gets bigger and bigger. There were boulders in there bigger than my van. The plan was for us to survey the new aven and for Dylan to have a go at the dig.
I have always wanted to have a go at surveying and so as Dylan prussicked up, Rob gave me a crash course in surveying with a distox. I went to the station and begun taking splays around the chamber. Next up I had to point the lazer upto Dylan. He spotted my next station and I fired off 3 identical points.
“you prussic up through a boulder choke to the rebelay and take the next splays from there” said rob as I set off up the rope. Approaching the sphincter, a small circular hole in the boulder choke, Dylan was swift to warn me not to pull on the small chockstone. I looked around. Now, maybe it is not intergral, however, this small chockstone appeared to be holding up a HUGE boulder, which I didn’t fancy sending down onto Rob. I did my best stick insect impression and passed through without dislodging anything.


Rob then joined. The next survey station was above the sphincter and beyond the rebelay. I clipped myself in and stepped across into the bolts to try and get on the point for the distox. Looking down into the hole was pure blackness. This is a distant remote place and I loved it. It was hard to maintain my position and to be still enough to take accurate readings. Weirdly there was no fear about hanging on cowstails and falling in to the sphincter, I was terrified however of dropping this stupidly expensive piece of equipment. splays done and we moved up again.

There is a vertical squeeze to get into the final chamber that realisitcally is best done without SRT kit. We went through kitted up and for a moment I was stuck as my gear filled the space I needed. With some wiggling and patience I got through, but not without snagging my wetsuit on a sharp bit of rock.


Dylan was chipping away with a bolting hammer in the corner. I took some final shots of the distox and then had a look around the small chamber. Eventually Dylan admitted defeat as his arms ran out of strength. Rob took the distox and it seems there is about 7m beyond the dig so that’s worth checking out. I peered in to have a look. Beyond the calcite bridge blocking the way on there was blackness. No draught but certainly worth a gander for completion sake.
Dropping back out of the squeeze I got stuck again as the distox box slid up and filled the gap. For a moment I couldn’t go forwards or backwards. I had hoped gravity would have helped me. Eventually I went back up into the chamber, removed some bits of kit and then dropped back through. We took some pictures above the sphincter and headed on back. Walking amongst these huge boulders feels like those places in a film where a T-rex would suddenly come back to life.
This time at the sump I was excited about passing through because I knew what to expect.
I took the slack out of the rope popped my head under and did slow long pulls on the rope. It felt very serene gliding through there this time.
Once back at Inglorious we kitted up. I always stay well clear of the bottom of the pitch as debris has been knocked off in the past. Dylan went up and eventually I heard the call “rope free” I left it a bit longer to ensure he was well away from the pitch. Clipping onto the rope I was about to ascend when I heard a loud noise from above, luckily at this point you are near a bit of an overhang. So I tried leaning into that and just braced. A big boulder hit the ground behind me with some smaller bits hitting my shoulder and back. I don’t mind admitting that the fear was very real. I still had to ascend. I started on up; halfway more bits started falling towards me. Bits of rock fist sized, thank goodness for my helmet is all I can say. Continuing on up there was a steady rain of small pebbles, my sphincter felt as stable as the one I passed through in the aven some time ago.
The rest of the way out was uneventful thankfully, we all washed off and then jumped into my van for post session beers / ciders and some more donuts.