Staff member
What with holidays, the forum transition, digging and work it has been weeks since my last post. Are we nearing the end of the F’ing Hopeless saga?

You will recall that we had made some pretty amazing progress through the dangerous and lengthy terminal choke. Beyond the final calcite blockage we could see the wall bending round ahead. I slid through the enlarged hole and over the pristine white formation. There was no way to avoid it. The team soon followed and we all waited on the other side to regroup.

It was walking size ahead – yippee! The stream flowed on the floor, the left wall remained solid and the far side of the choke formed the right hand side for the first 25m. A pretty big choke but we were through it. We came to the top of a steep ramp, partly old flowstone and partly a mud slope. Here the passage was big and we immediately thought of Duke Street in Ireby Fell Caverns which was similar in shape and scale. At the bottom of the slope things soon changed as the wall came down towards the floor in great big scoops of phreatic pockets. Against the left hand wall our stream emerged from the choke, cascaded down big cobbles and flowed into a crawl, quickly becoming flat out beneath a bedding roof and cobbled floor. It would need digging to progress more than a few metres.

On the right hand side there was a large ‘pocket’ alcove with a small choked hole down to where a stream could be heard. This was a new stream for sure. Between these two streams was the centre of the passage practically choked to the roof with dry sandy mud. It didn’t take long to dig through to a continuation where an astonishing wide flat roof was exposed above dry mud banks. It felt significant. It soon led to the other stream we had heard. This emerged from the cobble choke, ran for 20m or so before cutting down to a lower bedding in the floor which very soon became too low as well. So basically we had two streams on either side of a large passage maybe 25m between them and we couldn’t progress down neither!

The third person comes through the final obstacle of the choke 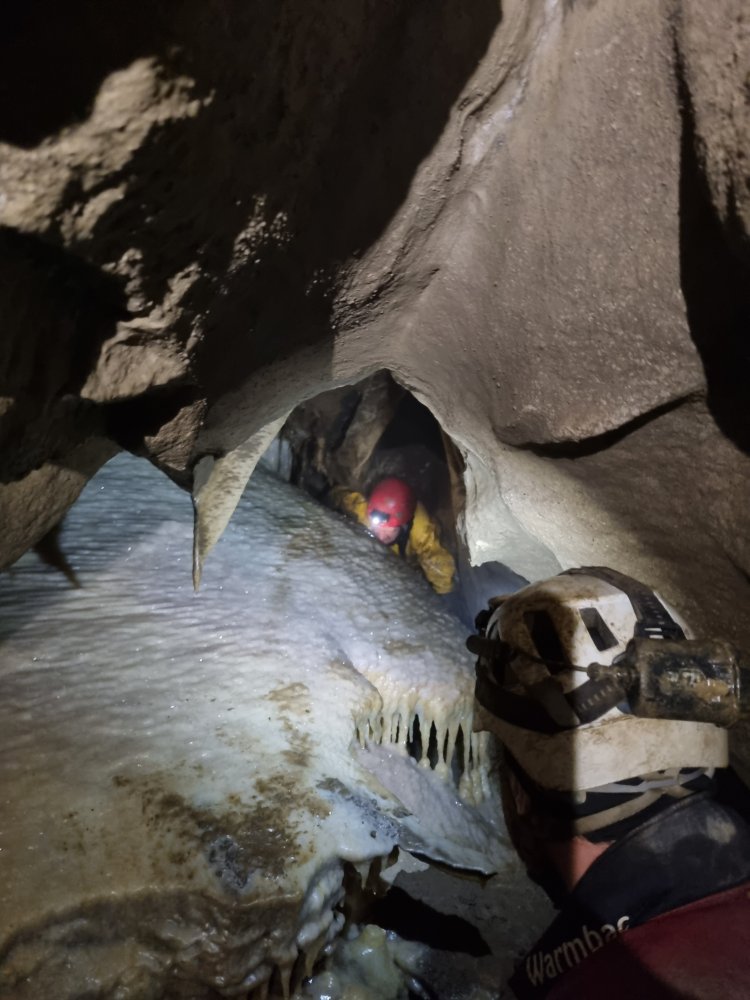 It get pretty big for a while 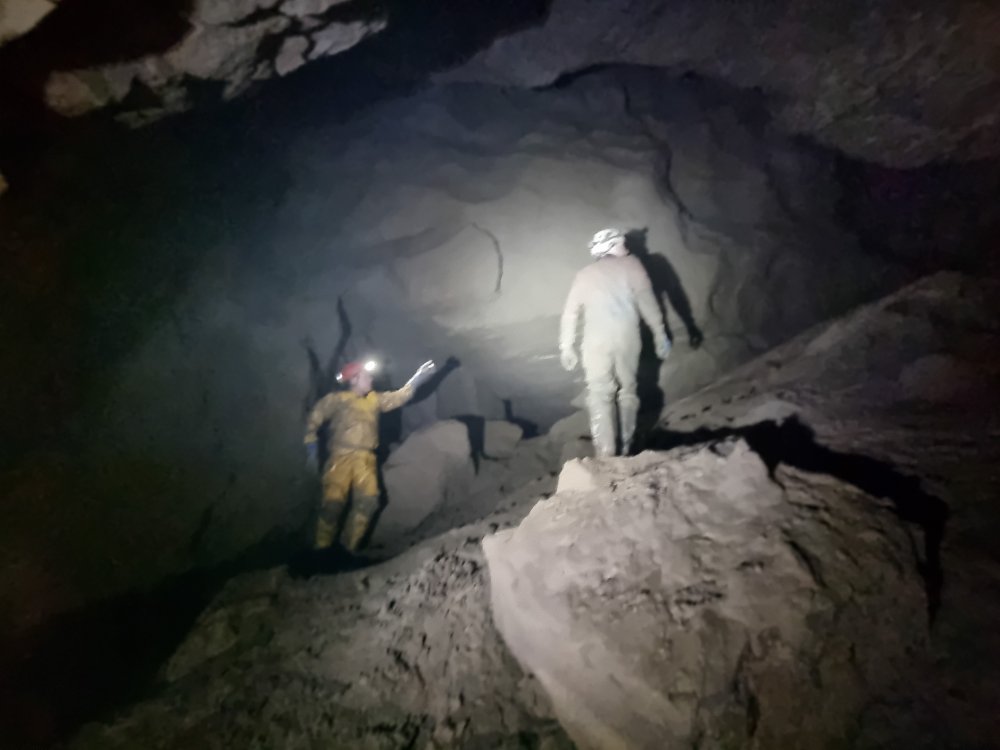 The stream disappears into a crawl under the left hand wall. 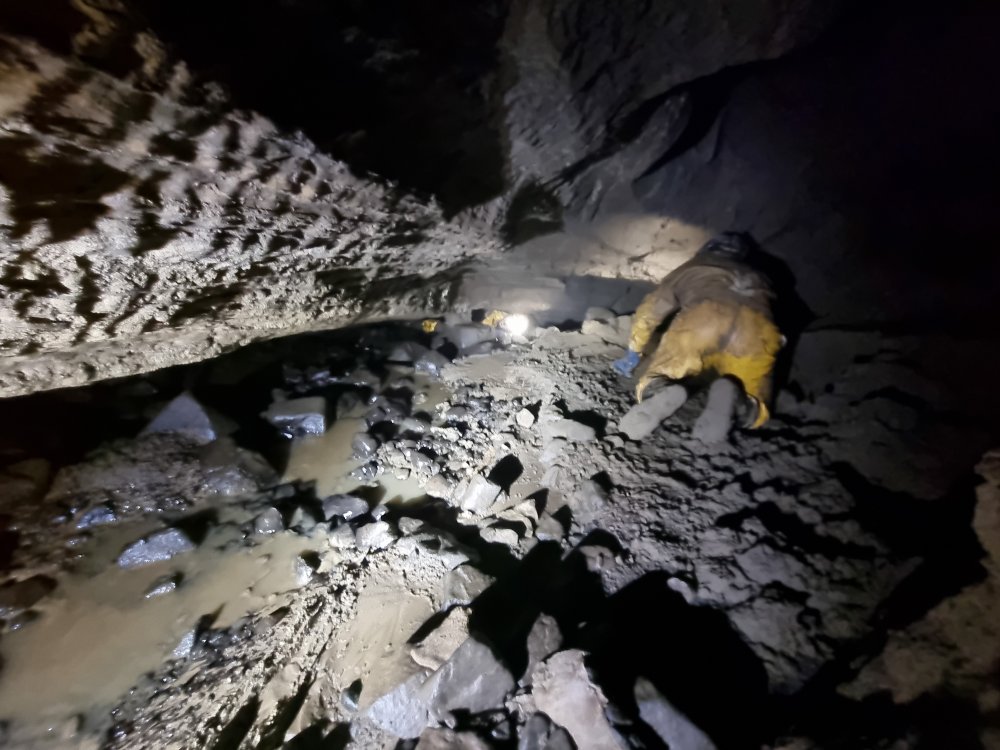 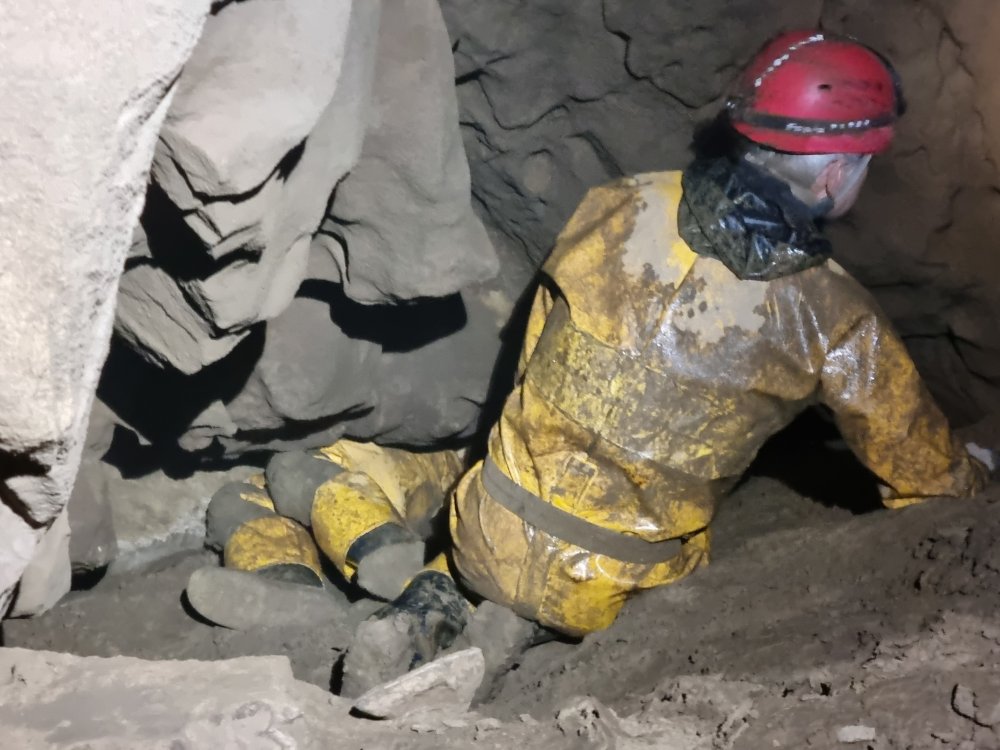 Into passage with an amazing roof 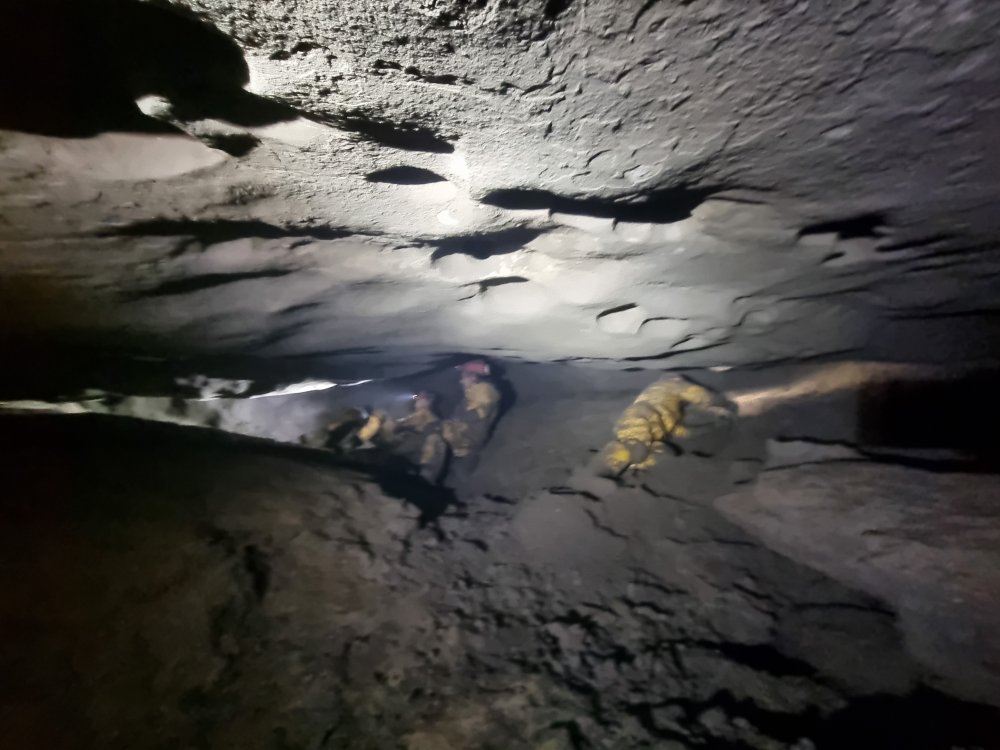 A new stream is met but goes too low again 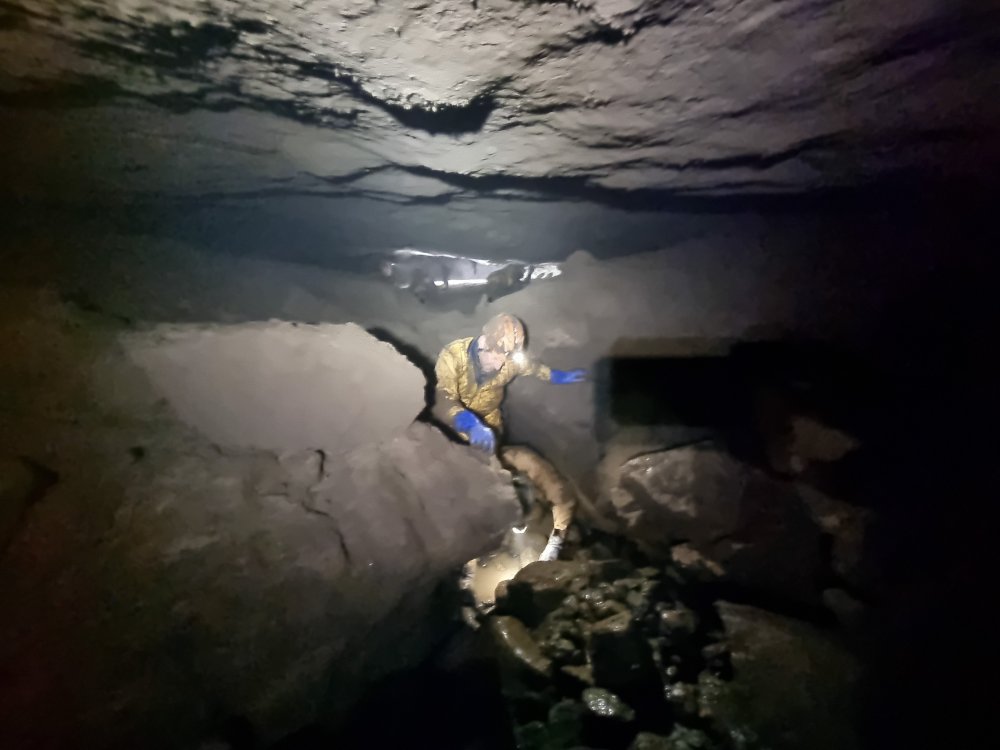 Over the next few months we pushed the left hand stream for some 25m, all of it flat out in the water, until digging became too wet and miserable. The right hand stream went really, really low after just a few metres but through a narrow cleft in the roof an enlargement could be seen some 5m in front. Digging here is going to take some effort but the survey shows there is still some depth to drop to base level. When we’ve had people in both ends they have been able to talk easily to each other so clearly the two streams are going to converge. We seriously hope the passage will then get bigger – taller at least. Our story is now up to date and this is our last reaming lead.

Yours truly tries a selfie at the sharp end 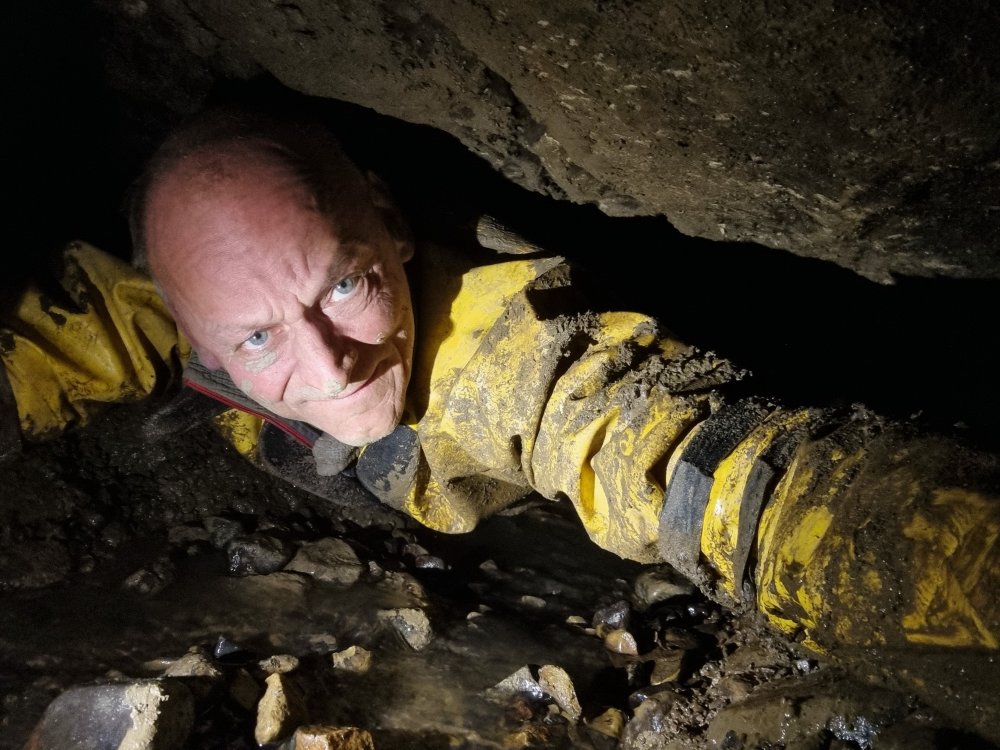 Elsewhere we still have a few odds and ends to survey but the length so far is around the 1km mark. There are a few photographic and conservation tasks to complete and we are waiting for approval to install resin anchors on the pitches. When this is all complete the cave can be added to the booking system along with a topo for all to enjoy. I’ll keep you posted on developments.

Franklin is writing up the story for future issues of Descent – will eight extra pages be enough we ask? We’ll see – enjoy.

Nick's rather fine group shot near the current end 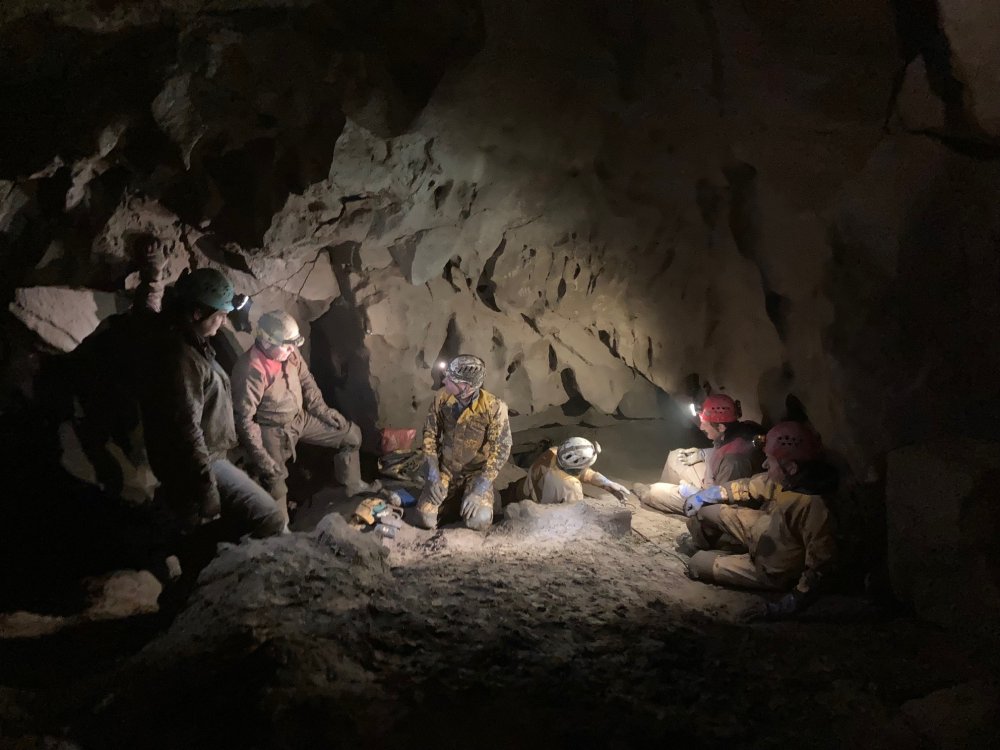 Any chance of sharing the survey @Badlad ?

Staff member
There is an updated version of the survey which was shared on here by Swallowneck a few pages back. It still isn't complete though so he may want to finish it off first. He'll see this and may well post the update.

What I have noticed on the new forum software is that if you just click on one photo in the post you can scroll through all the photos of that post which is quite neat. Cheers

I had a scan through, but didn't spot it first time.

For anyone else looking, it's attached to the below linked post:


Swallowneck said:
Still very much work in progress but all the data will be in the archive before too long for everyone to poke at. No secrets here.
Click to expand...

I found a shaft in Ogof Draenen which I called the Awe Chasm. There's a lot to be said for subtlety.

I'd just like to express my gratitude for all of your hard work and then taking the time to write it up so well on here. I've really enjoyed reading each new 'episode' and I can't wait to visit in the flesh!

I’ll second that! Great to see brilliant results and also an openness in sharing them! If you ever need an extra pair of midweek hands I’m often free!
S

PeteHall said:
Any chance of sharing the survey @Badlad ?
Click to expand...

The survey as it is at the moment can be found in the BCA Cave Registry.

Elevation needs loads of work, plan not finished but starting to look somthing like. Not done any X sections yet.
Still need to grab a little more data then the surveying will be up to date but at the moment other caverns measureless to man have taken over my spare time.

The Cave Registry is a fantastic resourse so please use it. If you have any data new or ancient to add pm me and I will get you sorted. Remember absolutly anything is better than nothing when it comes to recording caves.

Swallowneck said:
...but at the moment other caverns measureless to man have taken over my spare time.

Now that sounds intriguing, what cave is the next edition of of the grand expose going to cover?

Our weekend started with a typical Yorkshire summer BBQ...wind, rain, damp charcoal...Pegusus and Badlad did us proud though with some great food and company, although I would come to regret the second helping the following day!

Sunday began with a leasurely breakfast and wonder over Leck Fell to the fabulous F'ing Hopeless Pot where Badlad was planning on doing a little conservation work and I planned on grabbing a few shots in the upper series of the cave. The photography would prove particularly hard won as getting to these beautiful areas is particularly muddy, although it would be the short vertical pitch aptly named 'Squeeling Pig' that nearly put paid to my day. Pushing in to the snug bit, I was just telling Badlad how it wasn't too bad, when the stirrup of my pantin snapped. 10 minutes of puffing and panting ensued before I squidged through like a marshmallow through a piggy bank slot...although this proved to be. swift compared to the faff trying to get back down through it!
Fortunately the other obstacles the trip had to offer were easy by comparison, and I was soon wowed by the fantastic chambers and formations, and happily snapping away. Anyhow that's by far enough from me, here's some pictures! 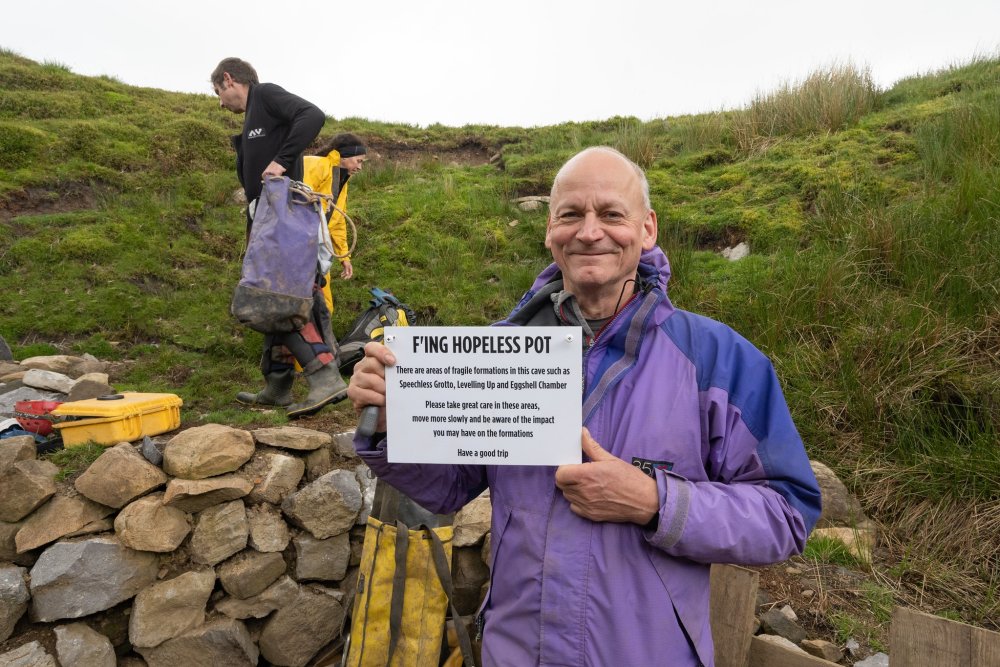 Shots of the beautiful flowstone and straws in eggshell chamber. 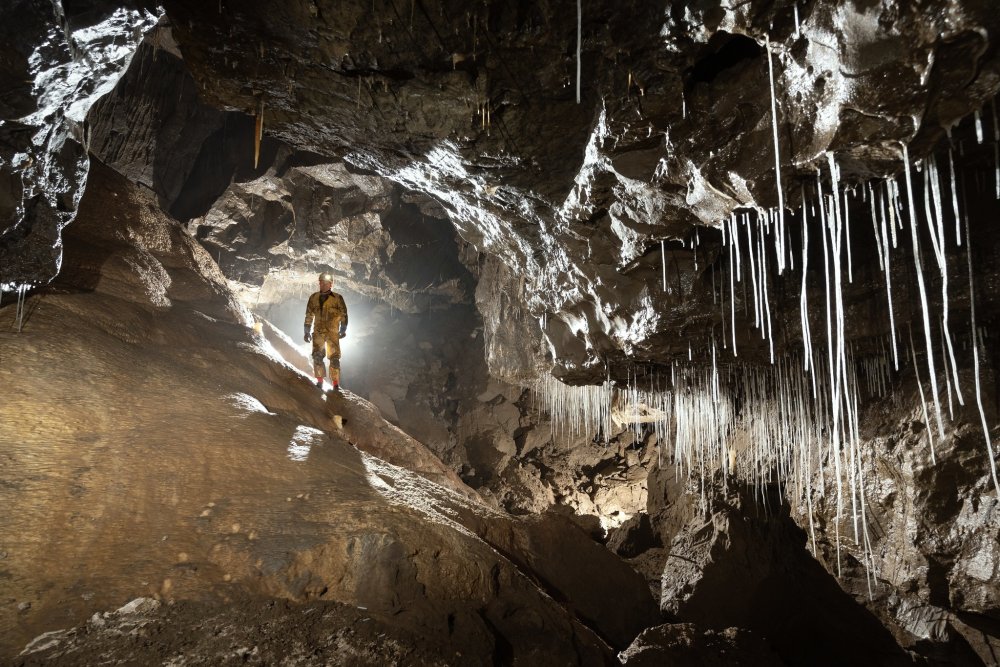 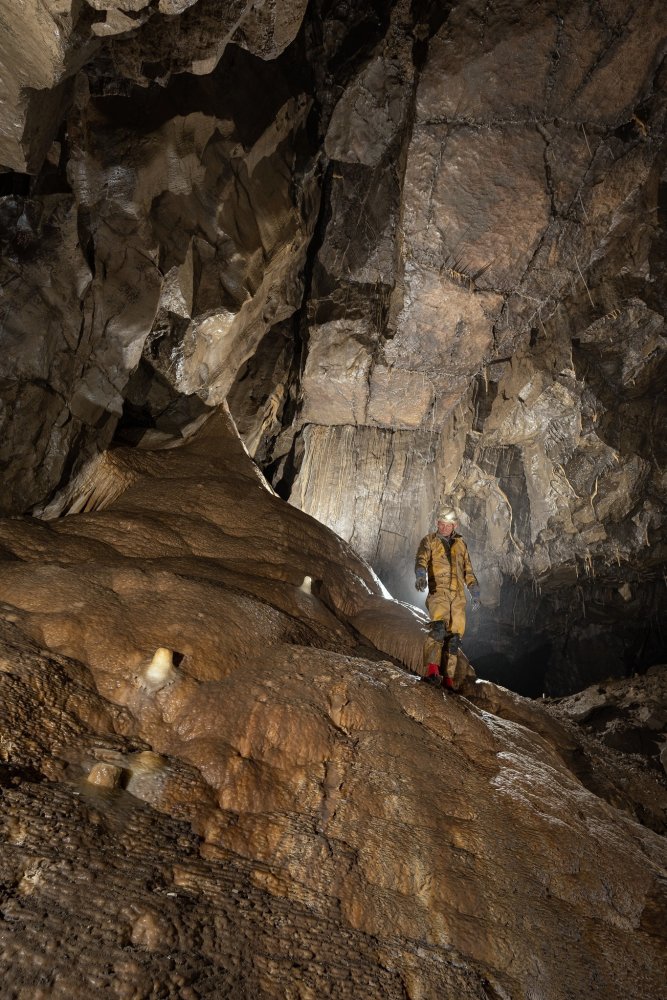 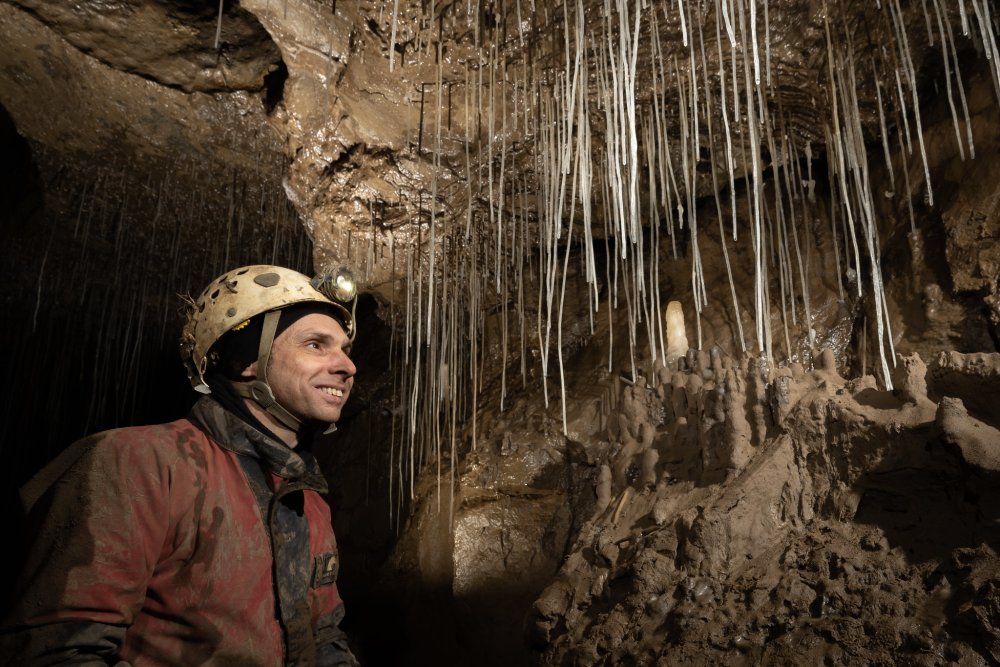 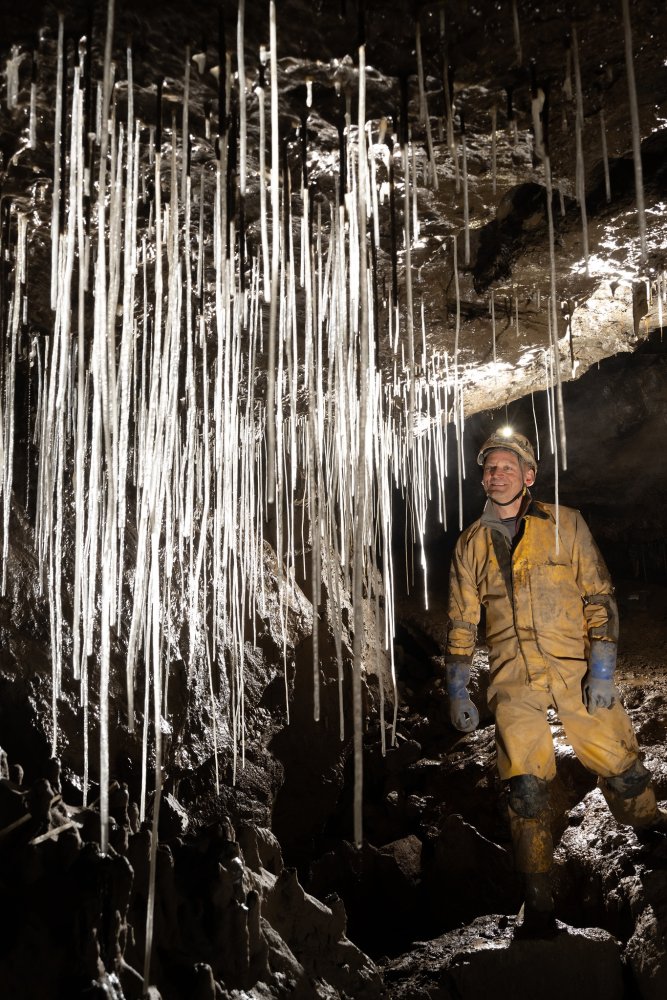 The stunning stal in Levelling Up 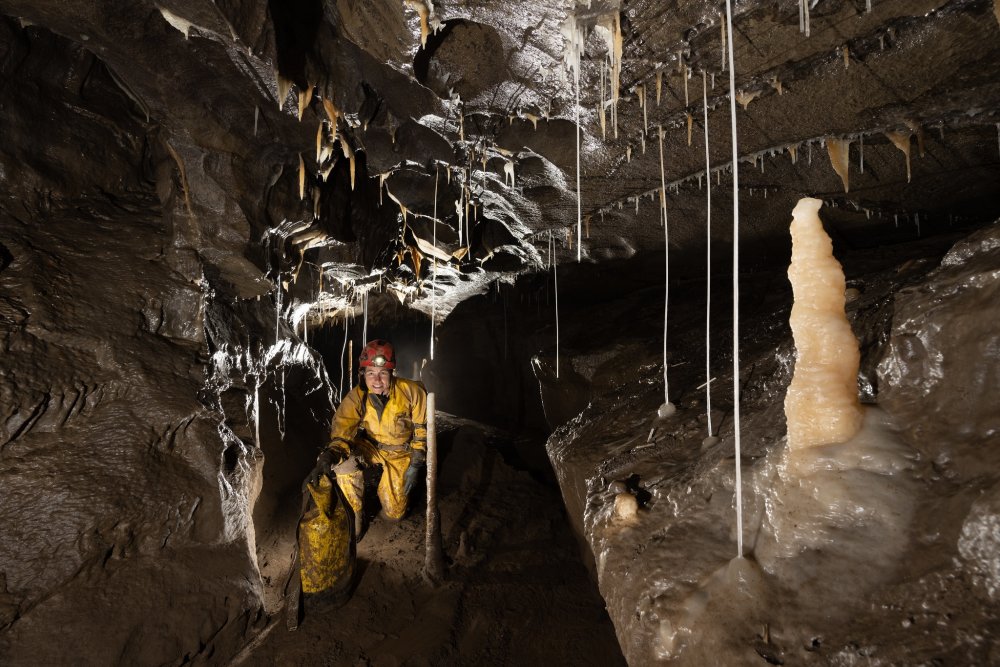 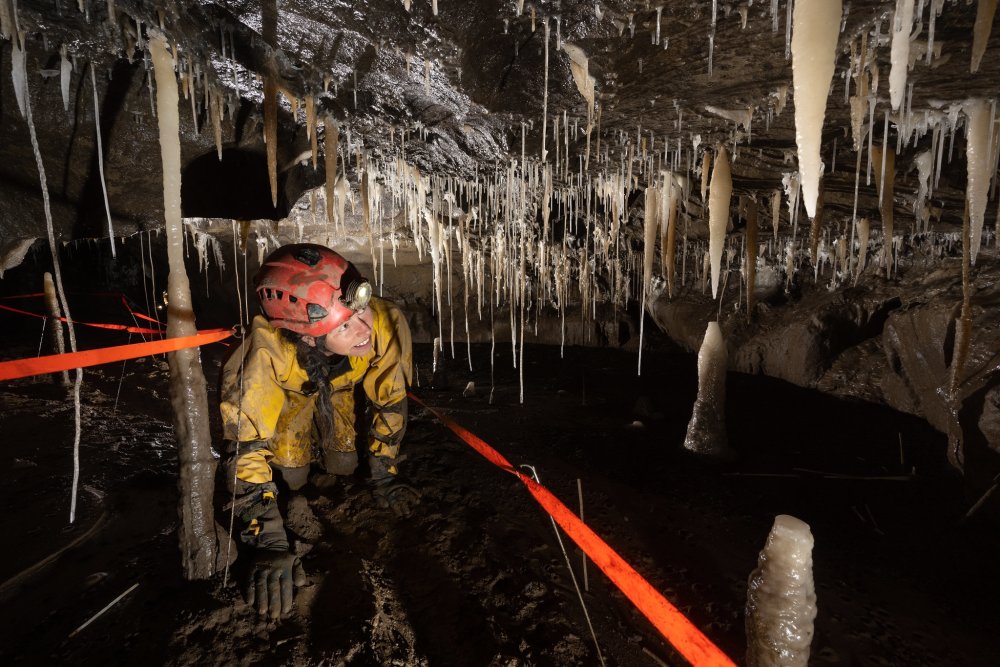 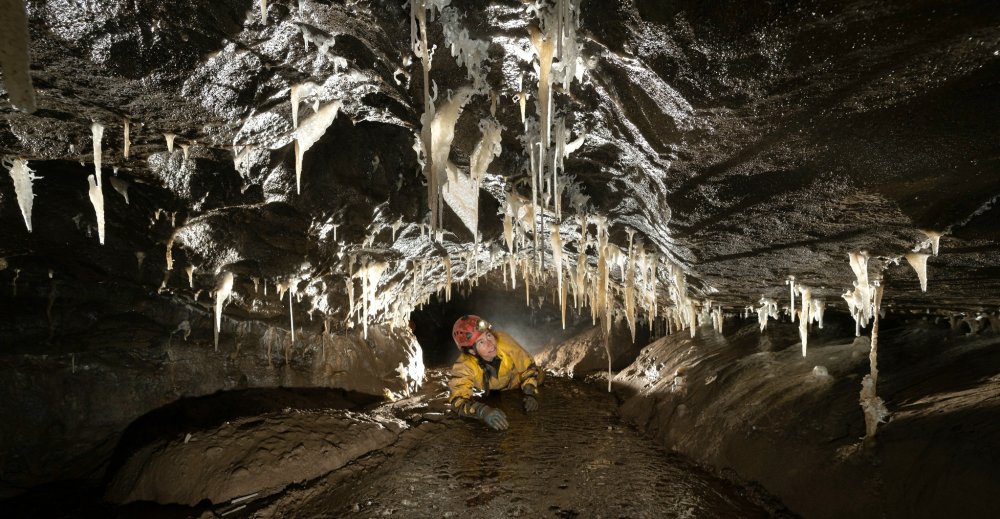 Lady of the lake grotto 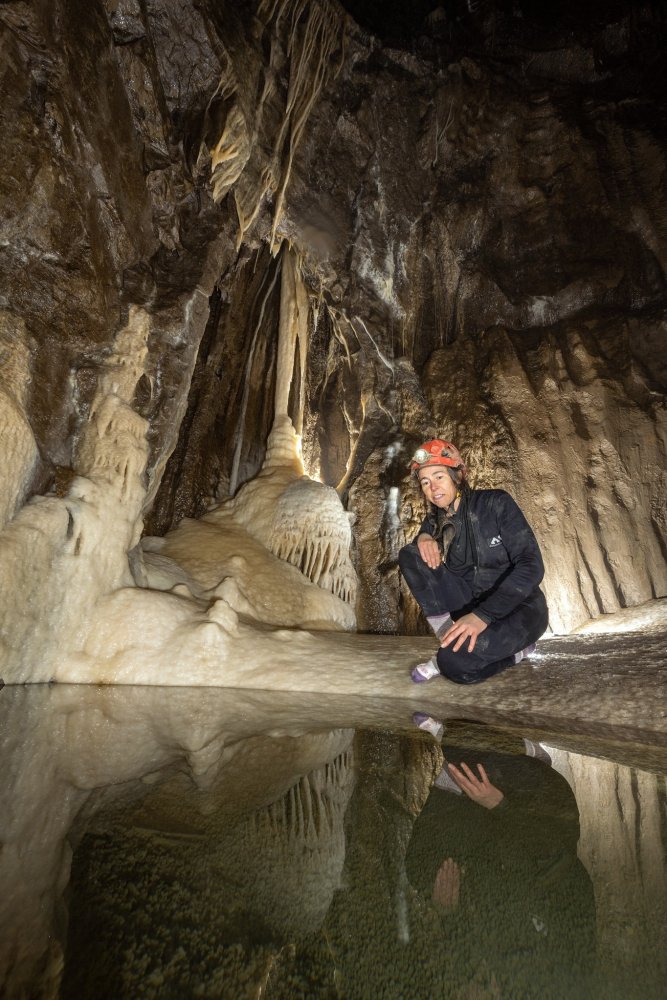 My thanks to the team for all the help with the photography. I look forward to getting the chance to go back and document the rest of this awesome cave.
Last edited: Jun 14, 2022

Lovely cave and photos- just a shame it's in Yawksher. Jammy bastards.

Pretty sure it’s in Lancashire

I'm not surprised - too nice for Yawksher.

Chunky - I'd settle for 10% of your talent with a camera!

Hopefully about 20 years. It would be good to avoid the bolt rash that IC hangers added to Scanty Lardos...

Staff member
Anchoring was approved at Saturday's CNCC meeting. Just need to make a date with an installer. I expect 10 anchors will do the three pitches.

We will update further next week on whether work has been complete (and of course publish a topo and some conservation notes).

Staff member
Also worth noting that after a short break we have recommenced digging at the end of the cave. Therefore, we are in and out of the cave a lot at the moment. I'll keep everyone posted on any progress. Cheers
You must log in or register to reply here.
Share:
Facebook Twitter Reddit Pinterest Tumblr WhatsApp Email Share Link