Following the discovery of some lengthy extensions for Jenga Pot, we never managed to get it all surveyed before the winter weather refilled the sumps and prevented entry again. We've now finally had a chance to get through the sumps and into the new areas discovered in 2020.

The Covid Extensions, despite being pretty grim in places actually yield some excellent bits of passage. Some of it is even walking height!

By the end of last year we'd managed to get the Covid Extensions surveyed but the exact direction and location on the surface of an exciting side passage remained a frustrating mystery. The Second Wave has now been mostly surveyed yielding another 150+ meters of passage for the system.

Divers are scheduled for the several sumps soon so more updates will follow!

The following was my trip report if anyone is interested (probably a little too detailed for anyone without intricate knowledge of the system, but posting for the benefit of a small handful who might be interested):

On 26th June, only 22 months since the passage was first discovered, myself and Gary decided to finally survey The Second Wave. This is the passage that goes off on the right shortly before Tree Root Chamber in the 2020 Covid Extensions of Jenga Pot. We surveyed most of the Covid Extensions in 2020, and then to Tree Root Chamber in April 2021, however, on that latter trip, we had a quick look up The Second Wave, and found the 10m long low airspace duck to be too full. It seems a couple of months are needed after each flood for this to drain enough. After that, all our pumping equipment failed, meaning summer 2021 was a lengthy re-cabling and re-wiring job.

We never regained entry to the Covid Extensions after April 2021, so The Second Wave, an enticing northbound passage which reaches what we assumed to be the Excalibur Pot streamway (200m downstream of where it is lost in Excalibur Pot) remained unsurveyed.

We were not specifically looking forward to this; I remember what an ordeal a trip to the furthest reaches of Jenga Pot is, and doing so while surveying was going to be especially demanding.

We set off down about 3:30pm after fueling the generator, however our efforts were nearly thwarted at Sump Three. On Wednesday just gone, Gary had drilled the fissure above the sump, the start of his efforts to bypass Sump Three. This meant unplugging the pump to plug in the drill. Therefore, on arrival at the sump today we plugged in the pump, and powered on... but nothing.

Some jiggling of the pump and connector later, we established that power was arriving perfectly well at the extension, but the pump wasn't firing. We were about to give up when Gary gave the contacts a final scrub, and as if by magic, the pump fired up on a last attempt. Only 20 minutes later, the water was lowered several inches and we were through.

We arrived at the small aven where surveying to Tree Root Chamber commenced last April, and onto the small pool where The Second Wave commences on the right (Tree Root Chamber is straight on here). I was pleased to see that a single survey leg would clear the several metres of slop and into the dry passage beyond.

We surveyed on, in the rather excellent passage, reaching 3m wide and 1m tall, with large, deep scallops filled with stream pebbles. This really is a magnificent passage which once carried a lot of water, and perhaps still does in flood. If anyone is ever down here to find out what happens in flood, they are probably in for a very bad day.

Sadly this passage soon ended and we were faced with the 10m long, low airspace duck. Neoprene hoods had been brought for this purpose and, I was once again delighted to see that a single survey shot would clear the water to a station on the sandbank opposite. The duck itself was proper submersion, head sideways, spluttery, taking a slalom route between chert nodules on the roof. The water was higher then when we first found it in August 2020, but lower than when we last visited in April 2021 (when it had barely an inch of airspace). It seems that this duck really does need at least a few months of the cave not flooding to become low enough to pass.

What little warmth we had left was quickly lost into the water of the duck, and surveying resumed as quickly as possible to avoid time to ponder the squalor we had just faced; and that awaited us on the way back.

Onwards, the passage is a crawl on fine gravel with mud banking on both sides, steadily enlarging, even to walking height for 15m or so, before reaching, a narrowing lined with bulbous cherty projections. Just at the start of this is the high draughting aven we are so curious about. When we were last here (Aug 2020) there was a howling (I really mean that... you could hear it) draught coming down, cold, fresh and very strong. Efforts to scale it were unsuccessful as it was so slippery. Today though, there was no draught whatsoever.

We hypothesise that this aven could go up towards a dig we have in the side of the River Dove, in the next valley west; interestingly, this dig was open down to a narrow, clean-washed fissure at -3m in August 2020; But has since completely filled in (the winter floods fill it with soil and leaves). Therefore, the draught may have been originating from that dig.

Down into the 'Excalibur' streamway (or what we think is the Excalibur streamway) the chills were starting to set in, and we felt a very long way from home. Nonetheless, we were determined to finish, so we set off surveying downstream where our 2020 explorations had pushed for about 60m to a terminal sump. Around the corner, we were greeted with the first lower section where chert nodules forced a thrash in the water back in 2020; Today however this would have required a back-crawl with full submersion. The water was certainly a little higher today, and presumably optimum time to explore the downstream passage is late summer when the water is at its lowest... and when you aren't already freezing!

We were not in the mood for another low airspace swim; Surveying of the 50m or so passage downstream of here will need to wait, but we did take a shot to at least fix the bearing, and my recollection is that the passage from that point is more or less a straight line.

Upstream, we took a shot to the first duck, which in 2020 was 4-5 inches airspace, but today was only 2-3 inches; Again, being already chilly and tired we declined to survey through this, thus leaving 15m of cave leading to the upstream sump unsurveyed, but the direction roughly known.

The next trip here may well be with divers, as the upstream and downstream sumps are spacious and offer a lot of promise.

The long slog out commenced; it really is quite an ordeal, taking an hour to exit Jenga from the furthest point, now several kg heavier with water and mud filling every orifice of our kit. The pumps were off when we arrived back at the sumps, so the genny must have run out of fuel, but the sumps have been dry for long enough now that they take days or even weeks to refill, so we were never in any danger.

We arrived out at 8pm, surprised and pleased to find two cans of Sprite and two bags of crisps waiting for us at the entrance, and then John Dale at his car. Thanks for popping down to check on us John!

Curry at Easingwold on way home to York was a worthy reward. 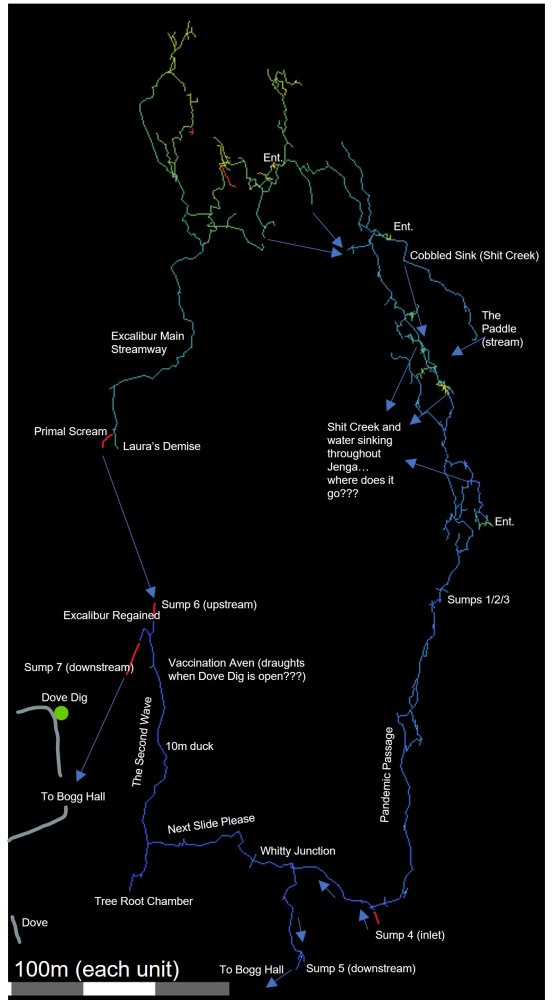 The classic 'Excalibur Pot' trip is from the top entrance to the Main Streamway. The entrance right-middle is Jenga Pot. Clearly there is a 'Grand Circle' waiting to be completed... but we need to wait until a diver has tackled Sump 6 to see whether this is ever likely to be feasible. For now, a connection to the River Dove valley (west side) is the most exciting prospect, and the possibility of more passages at higher level there.

That's more or less the entire known system surveyed apart from a few short sections estimated in red... or at least it was until today...

Just today, a diver has tackled Sump 4; The upstream percolation streamway (bottom right of survey). He reports passing a 20m sump, into large passage with a big chamber, another large passage and another sump. He was sufficiently excited that we are returning tomorrow so he can explore!!!

And that's just the first (and we thought, least promising) of the four sumps in the Jenga Covid Extensions.