WIN A BUNDLE OF CAVING EQUIPMENT!! 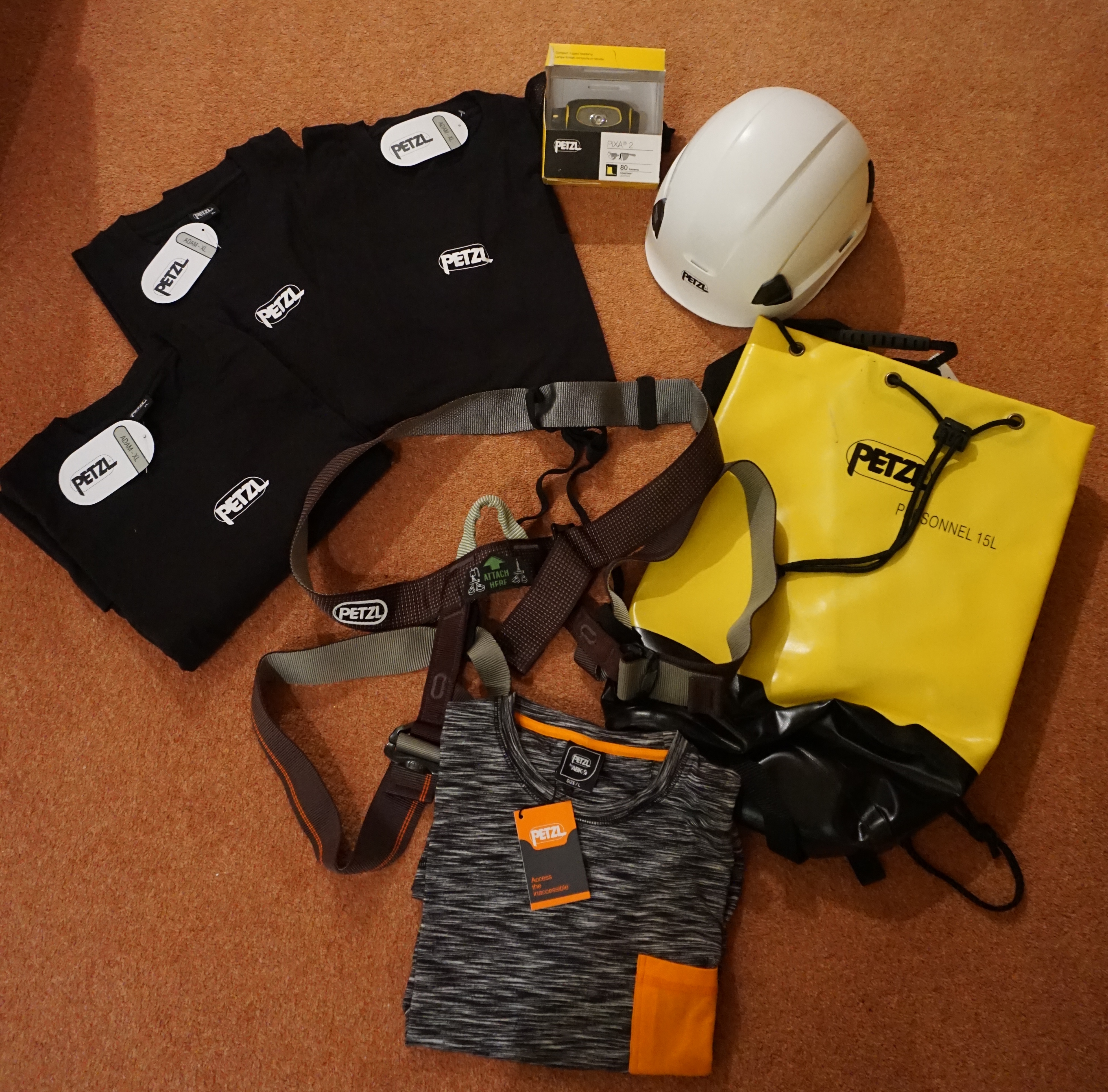 We've run a variety of competitions during lockdown to keep cavers entertained.
Thank you to all who have joined in so far

Hopefully, not long to go now before competitions can be about recent caving trips

With Thanks to Mark Wright and the UKC competition prize bundle for the caving equipment shown:

Theme of this competition is 'Where did that cave passage/pitch name come from?'

To enter, simply post on this thread with a favourite cave passage/pitch name and the explanation behind it.

The more obscure/interesting the better.

3 entries person.  Shortlist to be chosen by me then over to Random.org

?Golden Showers? in Ogof Nant Rhin, because it quite literally ?p*sses? from the roof

I did the original traverse across the top of Cliff Cavern back in the 80?s with Andy Goddard after Pete O?Neil and Frank Brown had done the climb to the top.

It?s still one of the loosest bolt climbs I?ve ever done.


The Petzl Gym climbing harness in the prize package was manufactured in 2013 but has been stored in the dark ever since. I bought it as a spare for a charity abseil event I ran but it was never used.

Cave name rather than a pitch or passage:  A very obscure North York Moors windypit known as "Not Oxendale Windypit".

When we discovered it I wanted to call it Oxendale Windypit  (it being a windypit in Oxendale) whilst Andy Brennan didn't.  The argument ranged back and forth that night in the pub until Andy in frustration said something along the lines of "Call it what you f - ing want, just not Oxendale Windypit".  Fairly nuff I thinks and off I go to draw up the survey which comes back titled "Not Oxendale Windypit".

Dominic Noone's body was thrown down it in 1826 after he was murdered, he was a Crown informer.

After "Dickwads" failed dive through sump 1 in Jenga pot we were in the pub attempting to draw beer mat survey of the sump and imagine what might lie beyond.
We decided that it would open up into a large chamber and the event would be filmed by the BBC with Professor Alice Roberts swimming through the pumped out sump like just she did in Browgill Cave on BBC's "Wild Swimming"programme.
We thought that the disgusting nature of the passage might put her off a bit - so we would have to tell her there was a Dinosaur Penis bone in the chamber to act as a bit of encouragement......

A few years later we attempted to pump the sump and ended up in filthy squalor for the duration of the summer. Months later the sump was breached into a large chamber (by North York Moors standards).

It didn't contain a Dinosaur Penis bone and Professor Alice has never been encouraged into it - but it does contain a dinosaur.

Butch pitch in JH which is to the west of the entrance shaft and up a few pitches climbed by the peppits of DPC (Derbyshire pennine club) and Glyn Roberts.

One of our fellow TSG members and digger Glyn Roberts, has a small terrier dog called butch. I?ve only met butch once in a chance encounter with Glyn, his wife/partner and mother-in-law in Ambleside. Me and Glyn had a lovely chat while butch was pinned against the outside wall of a shop by the back of Glyn?s legs. A dog or two passed while we were there, and little butch went berserk!

I guess as Glyn was involved in the project he thought the name butch had a nice double meaning given his dogs name and the effort required to get up there and a nice partner to bitch pitch on the other (eastern) end of the Cartgate.
F

Green and Smelly Passage in the Easegill System, which is neither green nor smelly ? in fact it?s a very pleasant passage.
It got its unfortunate name years ago when the original Easegill explorers were doing dye tests and smoke tests on the surface, while people were exploring underground. Apparently, the underground party were suddenly assailed by acrid fumes, just after (or just before) the water turned bright (fluorescein) green.

Then there are the first three pitches of Strans Gill Pot ? Faith, Hope and Charity. I?ve never spoken about this with their namers, but I assume that it?s a reference to a Biblical quote (Paul?s Letters to the Corinthians, if anyone?s interested): ?I commend unto thee these three ? Faith Hope and Charity, and the greatest of these is Charity? (or words to that effect).

The thing is, the first two pitches are small but awkward, and (tongue in cheek) you need faith and hope to get back up them; while the third pitch is a 50-m pitch in a huge shaft . . . so ? the greatest of these is Charity. But ? I am surmising here!!!

Butch famously taunted the Wigmore diggers that "that cave will never go, as long as there's a hole in my arse". Needless to say the cave did go, and the breakthrough was appropriately named.

AWOL Aven in Upper Flood. So named because, on the day it was bolt climbed to find a small extension, I had gone AWOL from the RAF.

I?d told the Ops room at work that I had friends from Ireland coming over to visit (specifically to visit Upper Flood and help with the climb) that weekend and asked if I needed to book leave to guarantee being off. The reply from the tasking Sergeant was ?Don?t worry about it, I?ll ring fence you for that weekend.?

Lo and behold, on the Thursday prior to the weekend in question, I got called into the Ops room (by a different SNCO) to be told I was needed to cover the deployment of an Exercise. My protestations were not met with sympathy and led to a heated discussion, during which I explained that they might want to save time and prepare the disciplinary paperwork in advance, because I would categorically not be in work and good luck finding me where I?d actually be!

You?ve probably (correctly) surmised that I was a bit disillusioned with the military at this point in my life!

I stuck to my guns. Friends visited. Beer was consumed. Virgin passage was discovered. A good time had by all!

I never did face a charge, but the following week was invited to a ?meeting without biscuits? during which a ?one way conversation? took place. Oddly, my name was top of the list for some pretty crap taskings for some time thereafter!

Perdition in Grebe Swallet. The dig was commenced on 18th June 2014 and it was suspected from the get-go that it wasn't going to be quick, easy or pleasant, so it was named with the biblical reference, viz:

Perdition: (in Christian theology) a state of eternal punishment and damnation into which a sinful and unrepentant person passes after death.

Coming up for seven years later and it's longer and even more eternally punishing. The core digging team currently is Andy, Michael, Nick, Tom and myself but no work has taken place this year. The breakthrough will occur on the next trip obviously. We anticipate the best through trip in the Mendip Hills will result.

Cow-Arse Worms passage in Titan. Such an evocative name ! You can't help but imagine that it's still riddled with Cow-Arse worms as you squirm through the smelly dirty water there !!

Hallucination Aven in Far Waters - Mike Wooding started to hallucinate badly during the return from his solo trip when he discovered it by pushing through the ducks, and then climbing it for 50'.  Afterwards he wasn't even sure that he had found something!

The Ride of the Valkyries - a 60 m shaft in Peak Cavern's Far Sump Extension.

Found on a hard (round the clock) trip via Far Sump. The survey showed it ought to drop back down into known territory, making the longer route back out unnecessary. This left us with a dilemma; if we went back we might just make the pub. If we dropped the pitch and it didn't go where we thought, we'd definitely miss the pub - but if the compass was right we would be out well in time for the pub. Decisions, decisions.

In the end we went for it, soared down the big aven we'd hoped we'd recognise - and raced out triumphantly to stop a lot of ale going bad in the Peak Hotel. The name just seemed right, given the circumstances.

Eternal Optimist link between Manchester Hole and Goyden pot.
My digging friends nicknamed me the eternal optimist after spending years pushing for a link between Manchester-Goyden. It was emphasised when I told people there was about 25ft to go; we dug 50ft I did a better survey to find it was now 25ft so egged them on with that info; having dug another 40ft did yet another survey to find it was still 25ft...running parallel! It became a running joke 25ft to go. On the day we broke through they kindly let me go through first but then said 'you cant name this one it has to be the Eternal Optimist'!

Marilyn
Named for Marilyn Monroe inspired by the scene in the film ?The Seven Year Itch? where the lady was stood over a subway grate in Manhattan and her dress was being blown up. The draught when we started digging was that strong.
https://en.wikipedia.org/wiki/The_Seven_Year_Itch#/media/File:Marilyn_Monroe_photo_pose_Seven_Year_Itch.jpg

The pitches were allusions to her films
1st pitch ? The Seven Year Pitch (but it didn?t take 7 years to dig it out)
2nd pitch ? Some Like It Not (Nigel G thought that he wouldn?t fit through the snug pitch head)
3rd pitch ? Gentlemen Prefer Blonde (also a reference to style of beer favoured by the diggers)
4th pitch ? Niagara (not a film noir but a pitch with its own murderous intent)

Disappointment Too was considered but rejected on the grounds that we had avoided the initial bedding plane and duck, so not a disappointment.

In short we were given a photograph of 'The Kingdom Of Lost Souls' but despite much searching could find no mention of this chamber.  Having found the negative  which was labelled, we at least knew it was in GB cave .........or was it?  Thanks to Adrian Clarke for the photo and negative.

After many people helped with the search MikeM  found the location by going down GB  - between the crawl towards the Gorge & foot of Devil's Elbow ladder - the two stalagmites at bottom are still recognisable.

So we don't know who gave it that name originally but it is certainly appropriate now due to the damage - those poor lost stal souls.

For those of us unable to get underground, you can experience the same as the pic above by throwing some Ready Brek on the wall and sitting under the table. Hope this helps in some small way

The (Death)Trapdoor, in Drunkards Hole.

A precariously balanced boulder beyond which I entered "The Attic" extensions above the known cave. So named as it formed a sort of trapdoor into the attic, but I reasoned that it was a bit of a death trap as it could easily slip and block the only way out.

You can read about what happened when it did slip out, here: https://ukcaving.com/board/index.php?topic=19394.0