This weekend just gone I attended my first NAMHO Conference, the mine explorer equivalent to Hidden Earth. Being a caver primarily, and a mine explorer as only an occasional jolly, I have never really thought to go to NAMHO before.

However, this year the event came to my home patch; Grosmont in the North York Moors.

It seems that NAMHO rotates around the country, each time organised and hosted by the local Mining Heritage Society. This year was the turn of the Cleveland Mining Heritage Society (CMHS), with who we (the North York Moors digging team) have good contacts, including a few of their members who have been digging regularly with us for years in Jenga, Excalibur and numerous other less glamourous locations.

We were asked to help, from leading trips, bringing and running the AV equipment for lectures, making packed lunches, setting up the facilities etc.

Some people arrived on Thursday night, but most Friday. The main hub for the event was St. Matthew’s Church in Grosmont, only 200m from the heritage ‘North York Moors Railway’ station in the centre of the village, where steam trains run all through the day. This is a stunning location in the middle of some of the Moors’ finest scenery. As you will see below, the signage quality was to the highest standard 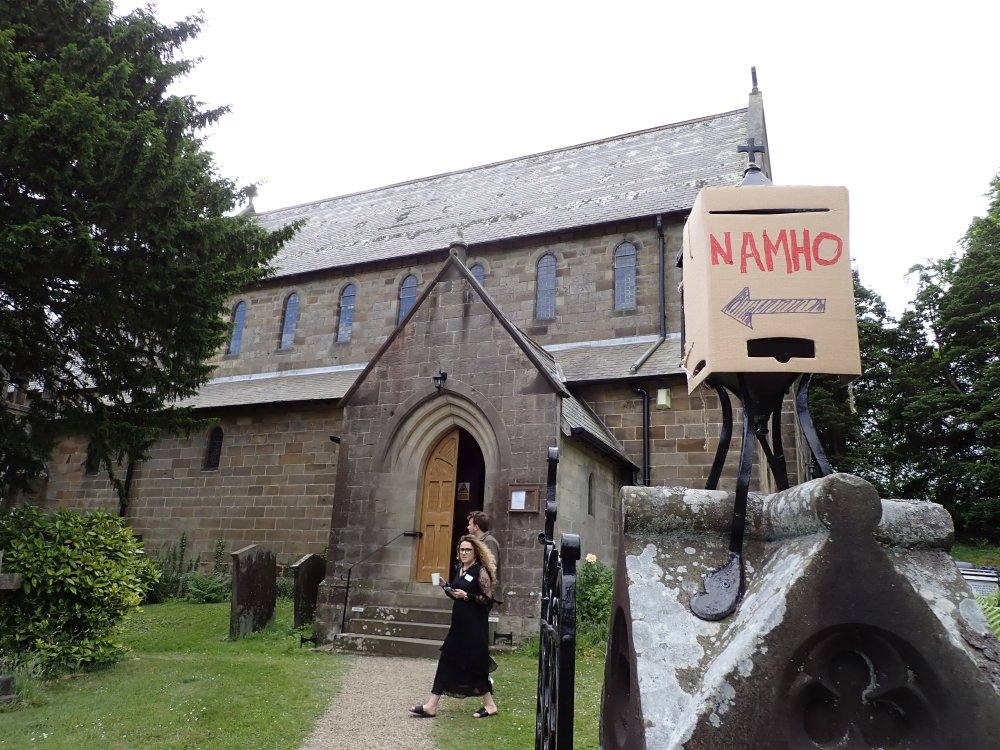 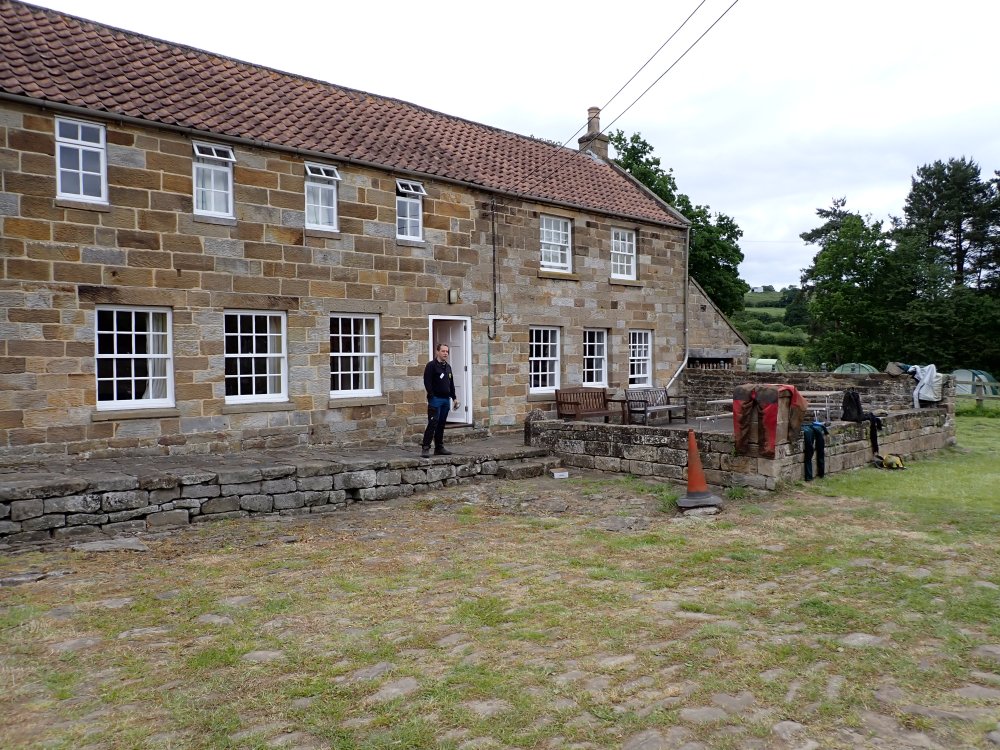 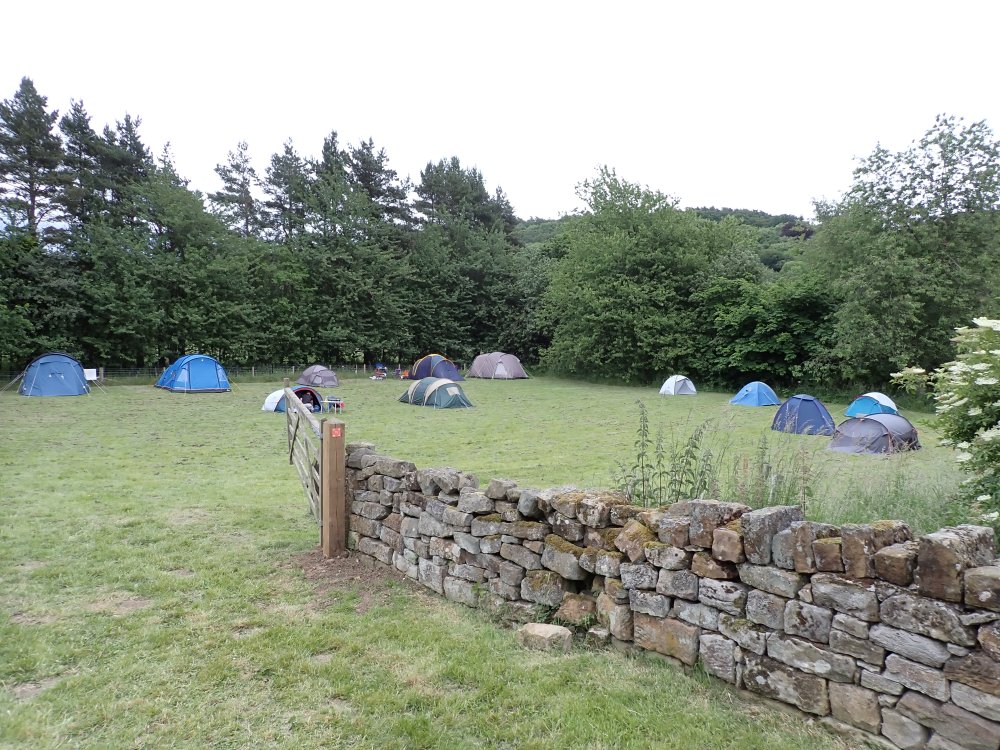 On Saturday and Sunday, there were several guided trips to local mines, including Jet, Ironstone and Whinstone, which had been organised. I understand that these were mostly booked up in advance when people signed up to the event. I think there were also some guided walks happening too, taking in some of the industrial archaeology of the area, which has been largely sculpted by the Eskdale Ironstone mining and the mining of the Whinstone Ridge. Most of the trips were short, and some people attended multiple events through each day, really making the most of the weekend.

The weather was kind for the whole weekend, and everyone was in good spirits, enjoying a few late afternoon pints in the sun.

For those not going underground (including myself), lectures ran both days. These were much more appealing to a mere caver such as myself than I had expected. They included talks on the ironstone history of the area, and then a journey along the extensively mined Whinstone Ridge crossing the North York Moors (by Rick Stewart, who nearly 20 years ago co-authored the Moorland Caver guidebook that got us interested in the area... very nice to finally meet you in person Rick). There was a rather good talk on iron ore processing, an excellent lecture on the Boulby Potash Mine (a one-mile deep mine near Whitby, which is still operating), plus other talks covering nearby jet and alum mining history. The quality of the presenters was extremely high and well organised. 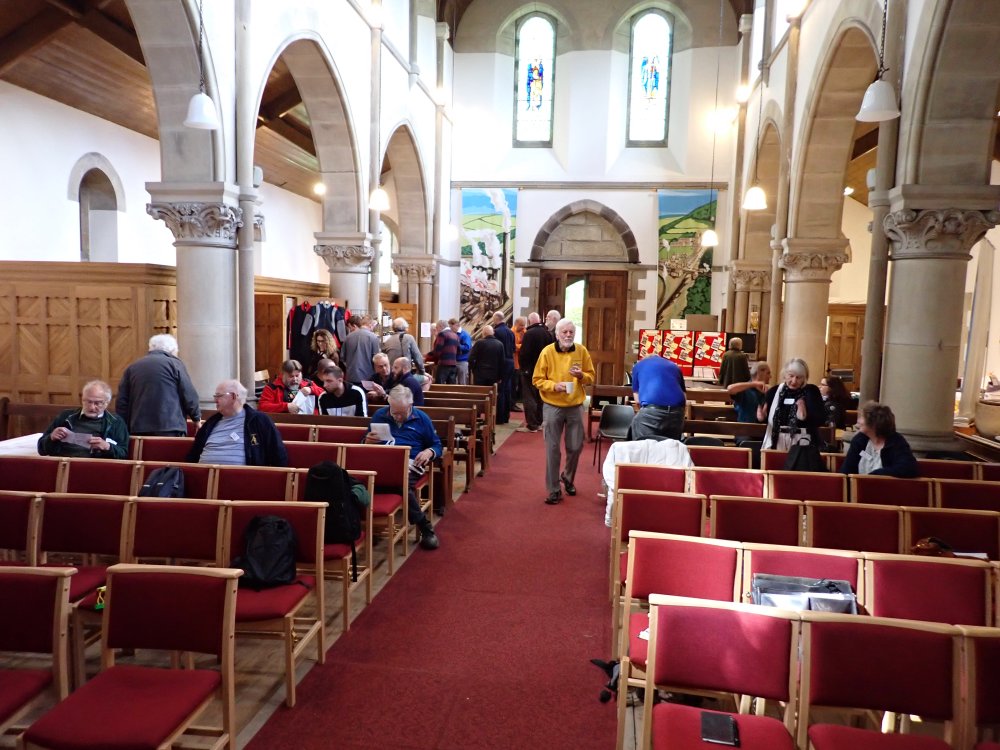 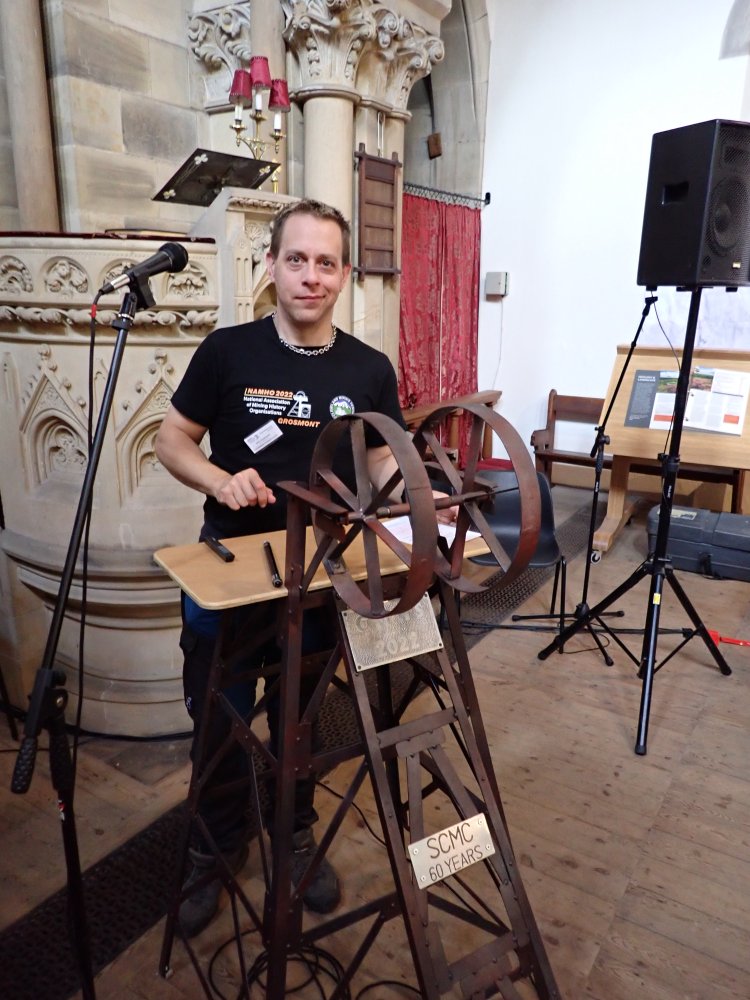 No... Gary was not presenting... just testing the AV setup

The lecture hall hosted a popup Starless River shop for anyone needing some new kit… and yes, of course, he was wearing shorts! 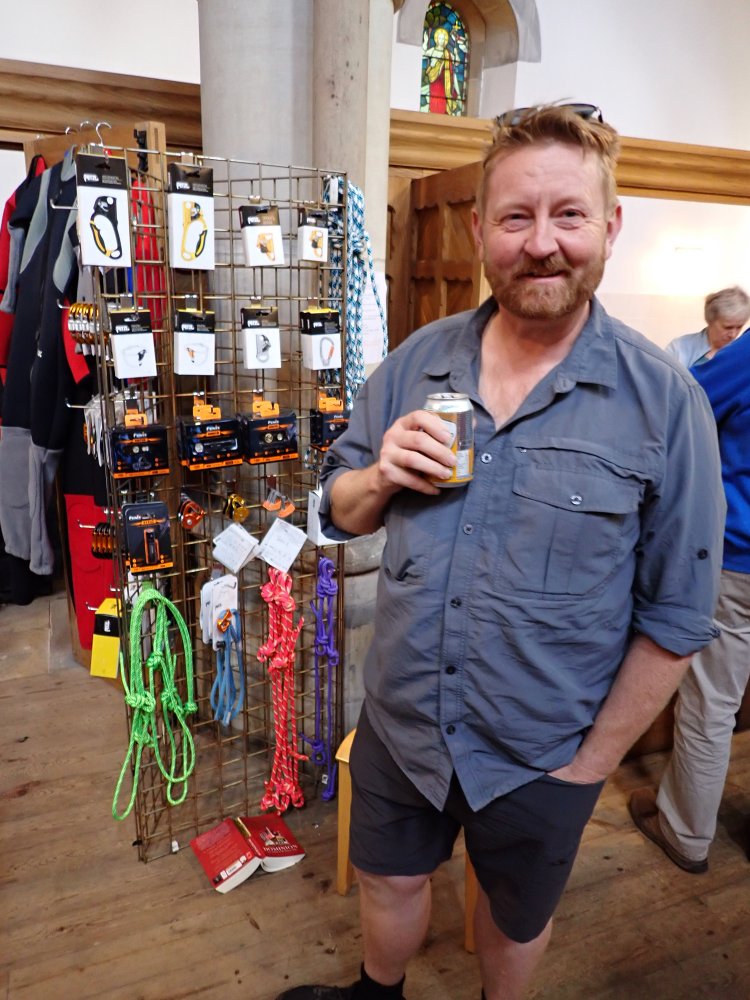 Most critically, at the back of the hall was a bar with four different beers on (although we drunk it dry by 8pm on Saturday resulting in volunteers carrying trays of pints from the nearby pub up to the venue… I don’t think they were prepared for the onslaught of several more heavy-drinking cavers than usual). 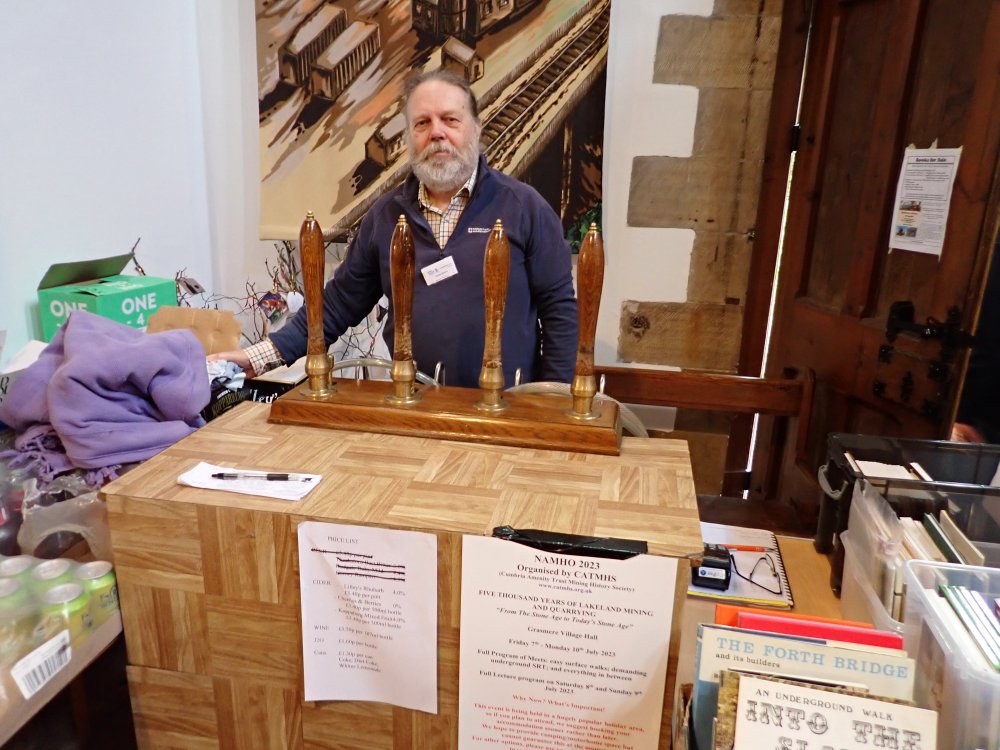 Amongst some of the displays were Swaledale Mountain Rescue Team, who were on hand, just in case of any little incidents during any of the mine trips… 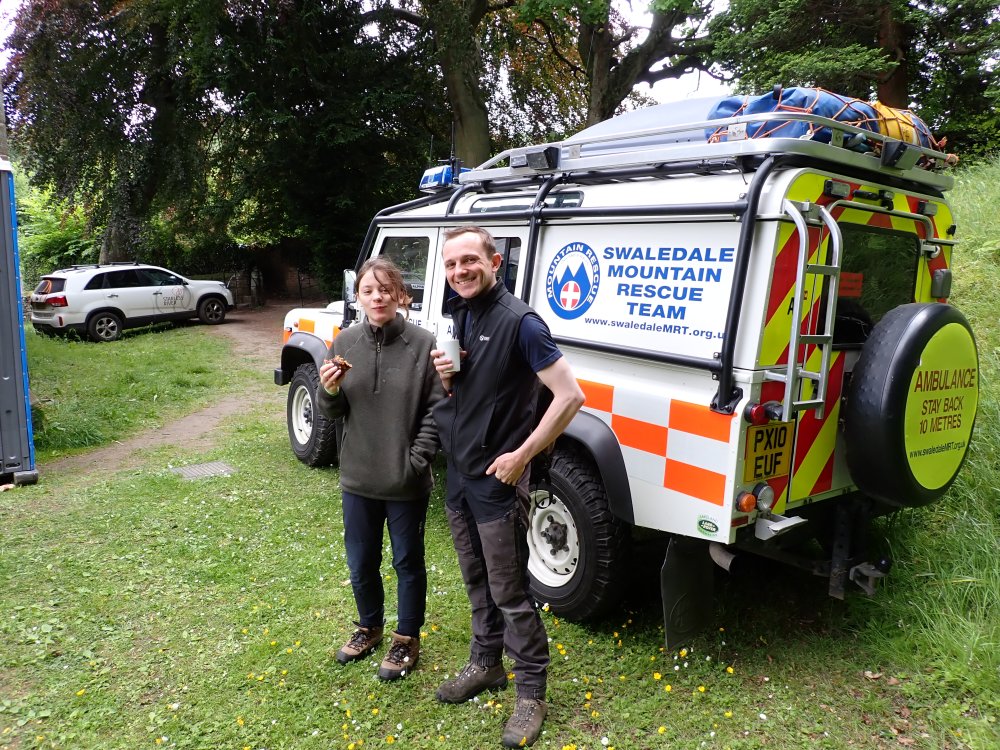 Everyone seemed to have a great time, whether on trips or in talks each day; and in-between was plenty of socializing. Both of my evenings ended around a fire basket at the campsite with 15+ people, including some new acquaintances. The Friday night frivolity involving the passing around of a bottle of Absinthe, Rum, Whisky, and some kind of strange herbal liquor. Thankfully the cooked breakfast on Saturday morning helped absorb the hangover.

Of course, there was also a lot of milling around Grosmont watching the stream trains come by. This fitted with the industrial heritage theme nicely. 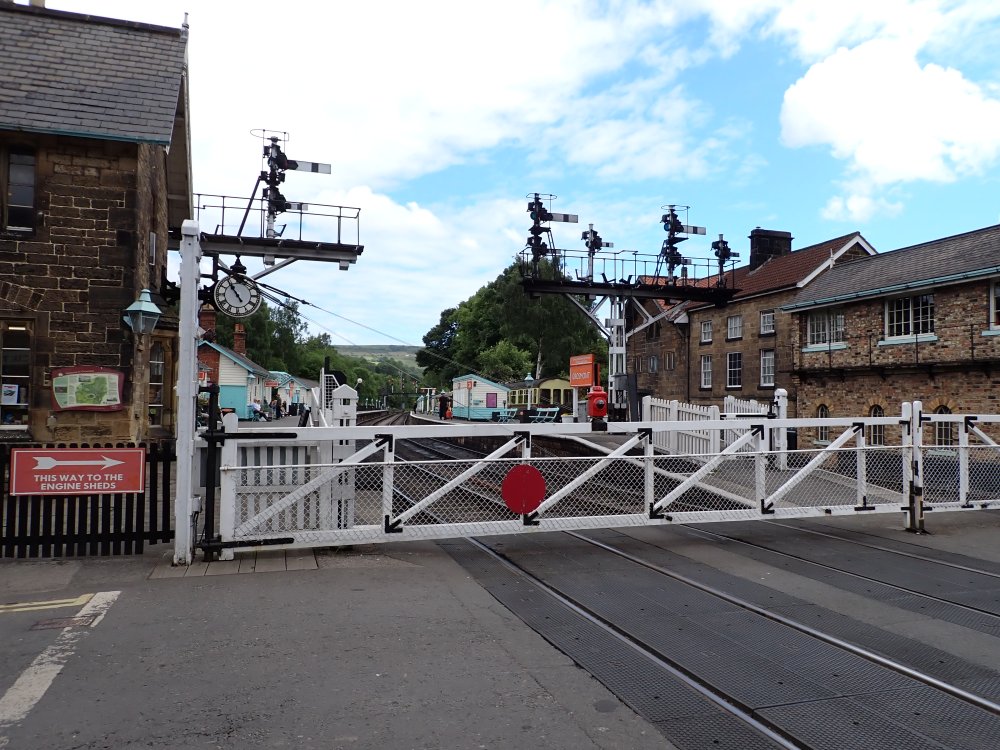 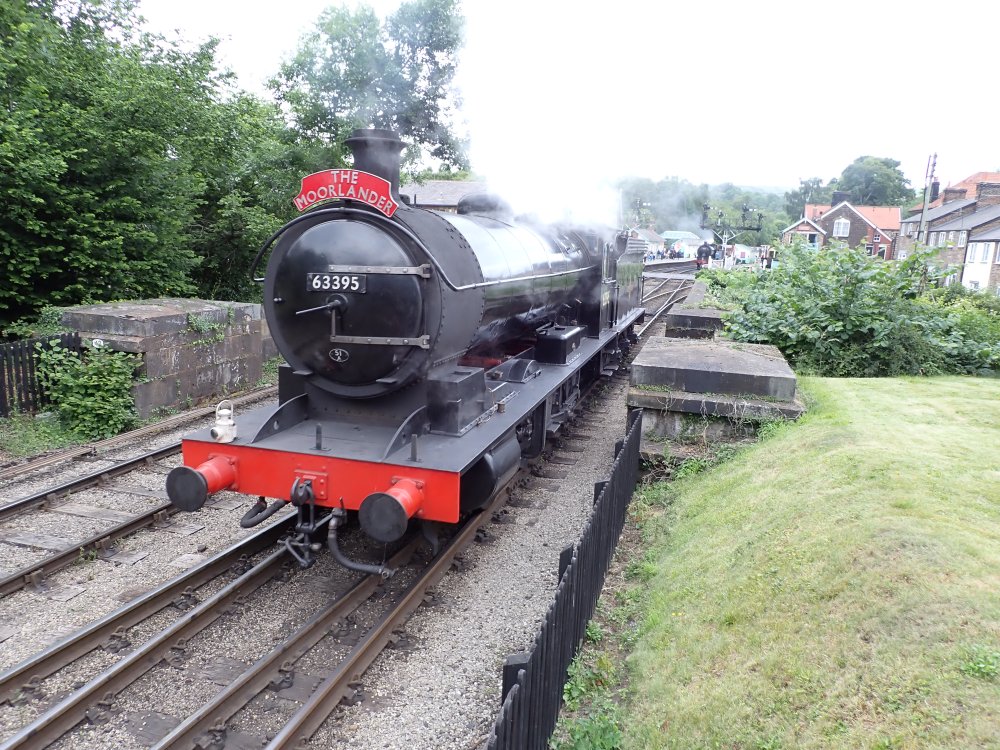 Incidentally, if anyone is ever looking for an excellent surface day out in the North York Moors; Arrive at Pickering for the first steam train to Whitby; Have a fish and chip lunch at Whitby, take an early afternoon train back to Grosmont (or Goathland for a shorter walk), then an excellent 2.5-3hr walk across the top of the moors outside of Goathland, then down into Newtondale, where you can stop the steam train at a small request stop to return to Pickering. An excellent day out!

Many people stayed on until Monday, including a group heading down to visit Excalibur Pot as a rogue caving trip. Hopefully they had a good time.

I have no idea how this compared to other NAMHO events and venues, but from my perspective as a long-time caver, but newcomer to mine exploration events, it was awesome, friendly, professionally run, and a thoroughly enjoyable weekend.

Thank you to CMHS who have put on a top-notch event, setting a very high standard indeed. For cavers reading this with an interest in mining heritage, I can strongly recommend putting NAMHO into your diary for next year (which will be run by CATMHS in Grasmere, 7-10th July 2023).
T

A fantastic time was had - thanks to all concerned. (it was nice to meet you too).

Never been to a bad one yet, they are always excellent events, very much enjoyed this years Thanks to all who worked to make it happen!

Staff member
Thanks so much for your write up - giving a great flavour of the event - might even be tempted....

My regret was that I had failed to make full and adequate planning and as a result didn't get as much out of the event as I could have done, having said that, it was the first time in my life that i had visited the area. Long drive from Great Wyrley Cannock, but interesting. I hope that others on here will make the annual event a diary date in the future.

Badlad said:
Thanks so much for your write up - giving a great flavour of the event - might even be tempted....
Click to expand...

That's what I was thinking....if we'd known a bit more about it beforehand we might have gone.. do keep us updated for next year...any news on Hidden Earth??

The bottom line, or lines on the event are that although described as a conference the lecture program only forms part of the event. In as few a words as possible, most attendees (delegates) are campers who are there to go undergound, and enjoy the annual get together over a pint.
There was a thread on here, https://ukcaving.com/board/index.php?threads/namho-2022-early-bird-rate-closing-soon.29342/ but a bit more about it would really have been better. I will make a mental note of this for the future.

A lot of pints it would seem. Next year will see that particular issue resolved!

Pegasus said:
That's what I was thinking....if we'd known a bit more about it beforehand we might have gone.. do keep us updated for next year...any news on Hidden Earth??
Click to expand...

Hey up Jane... you should keep an eye on UK Caving 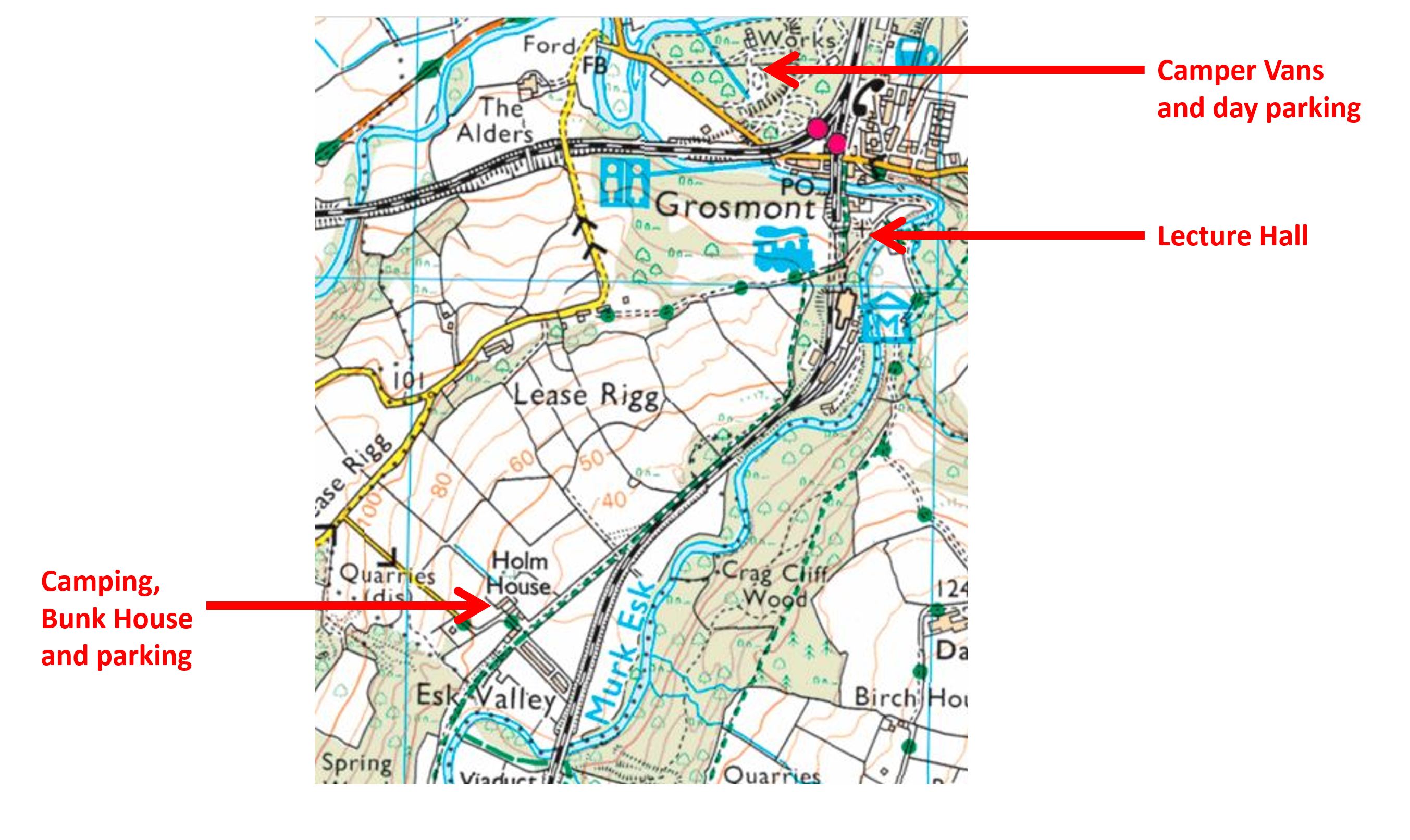 NAMHO Conference 2022 Accommodation update NAMHO 2022 will be hosted by the Cleveland Mining Heritage Society and take place in Grosmont, North Yorkshire from Friday 17th to Monday 20th June 2022. Organised accommodation will be exclusive use of the Holme House Residential Centre and Campsite...

The last opportunity to book a place at NAMHO 2022 at the reduced ?25 Early Bird rate is 31 March. Spaces are still available on the underground trips for those with BCA insurance. https://www.namho.org/conf2022/confpages/conf_home.php

Agreed though... I only went because it was on my home patch and run by friends from CMHS. Would be good to see what more can be done to get the message out more and get more cavers along in future.

I know that Gary (Hidden Earth Lecture Secretary, webmaster, and general Social Media/PR person) hasn't heard anything to suggest HE might be happening. I suspect (but hope not) that this could be the end of an era. It could be time to start considering an alternative approach to national caving events if anyone is willing to step up to the plate. The problem is numbers and venue. The format of NAMHO was awesome, but it would struggle to work for the 300+ people who usually turn up to Hidden Earth. I'm not really sure there is a solution.
Last edited: Jun 23, 2022

Staff member
I didn't read the NAMHO thread as I didn't think it applied to me, doh.

Hidden Earth needs a total rethink. The current format struggles due to venue requirements, so change the format.

Cavematt said:
Hey up Jane... you should keep an eye on UK Caving
Click to expand...

I spent two days in a church and didn't get struck by lightning or carried off by the shadows!

NAMHO 2022 – doing it the Cleveland way – Darkness Below

An excellent write up indeed. It was an area I had never before visited and I spent a liot of time exploring the area. A devil of a drive though, about 4 hours from Great Wyrley Cannock where I live.

gardouth said:
I spent two days in a church and didn't get struck by lightning or carried off by the shadows!
Click to expand...