I have not seen this before, but short of a spray can exploding here can anyone explain the colour of this passage? No I have not edited it. It's location is a small side passage towards the end of Black Reef cave in Ribblehead.

It could be dye, but why here in this one specific side passage and not in any other part of the cave. In my 15 years of caving I have never seen purple anything underground.

Is it some sort of bacteria?? 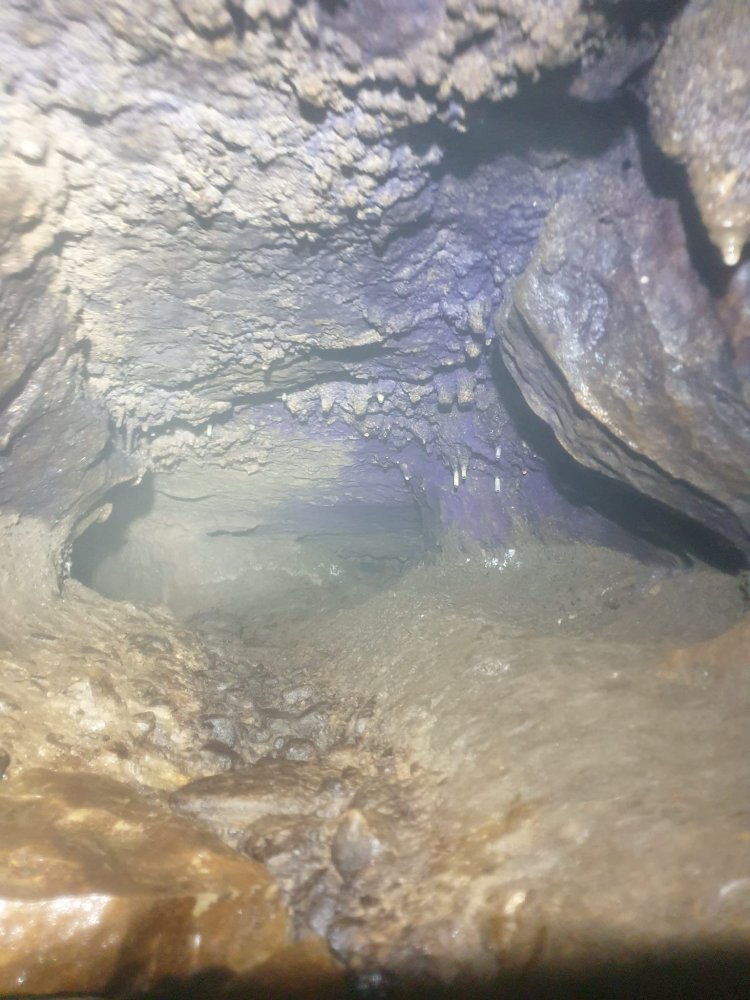 Possible, I was near the surface as the draft was strong and spider webs evident nearby, but it still don't explain why only there in a passage with no water flow.

In the section "THE ‘REEFS’ OF BLACK REEF CAVE AND OTHER STRANGE TALES FROM RIBBLEHEAD" there is this mention:
"The cave is characterised by the presence of extensive coloured bacterial colonies on the walls. Small
patches of the gold bacteria in caves have been observed for several years however in 2012 a brilliant purple
bacteria was first observed in one small area of the cave. This has been the subject of a study by the John
Innes Institute at the University of Norwich. After many visits to the cave we still have not decided if the
manganese deposits control the distribution of the bacterial colonies. There is only one very small area of
purple but large areas of the walls and roof are covered in gold, rust coloured and grey/white bacteria, other
bacteria with no colour must also be on the cave walls."

Thanks for the info, very interesting. I heard from a friend it could be manganese, so it could be an interaction between the bacteria and the minerals? Fascinating, its definitely a first for me.

I went there and looked at that with (the late) Dave Hodgson several years ago. He was studying it.
Yes, they are bacteria. There was talk of possible interest in connection with antibiotic resistance studies.
T

The Gritstone Club did a smoke test from the junction near the end of the North Inlet of Black Reef in 2012. Could that have triggered any bacteriological activity? Or would it have hindered activity? Or have had no effect at all?
J

Hi Alex, as AlanW says it is a biofilm. A previous researcher, in conjunction with Phil Murphy of Leeds University managed to isolate and sequence the purple bacteria. The purple forming compound is Violacein and the bacteria may show antibacterial properties. I have been following up this research, but so far haven't managed to isolate the purple bacteria and my attempt at DNA extraction for a whole community analysis was unsuccessful. However, I hope to make a return visit later in the year to hopefully learn more about this site.

Is there anything I can do to help with this research, such as getting a sample for you? Or is it best I leave this to you and also I guess the caving community to avoid that side passage to avoid contamination?
You must log in or register to reply here.
Share:
Facebook Twitter Reddit Pinterest Tumblr WhatsApp Email Share Link