Tell us your flora and fauna tales for a chance to win a ?100+ Exped Bag!!

So the Alderley Copper mines have been known for entomopathogenic fungi, a rather gruesome end for flies, moths, and spiders entering the adit for a winter's rest for some time now, and indeed, although is not the only place! Once you see these little white cottony objects in the entrances to some of Derbyshire mines you will quite often start to spot more examples. Our secretary has brought an expert in at times to study these fascinating entombed creatures within the adit of wood mine.
It has also fascinated me for some time, and I have spent a fair bit of time scouring the passageways looking for evermore elaborate examples.
It was when I started exploring one passage in particular, that doesn't see a lot of visitors that I discovered what could be described as the holy grail of these bizarre things. Known as Cordyceps, named so because of the shape of the fruiting body's which protrude from the creature's thorax, from wiki; The generic name Cordyceps is derived from the Greek word ??????? kord?l?, meaning "club", and the Greek word ?????? cephali, meaning "head" .
I think from the image below you will see this being a very good example of a descriptive name!

I had no idea they were even a thing in this country, but here I was, in front of a victim to this quite alien structure!

If you are interested and want to learn more about this fascinating fungus, type zombie ant on youtube, it really is something taken out of a horror movie! 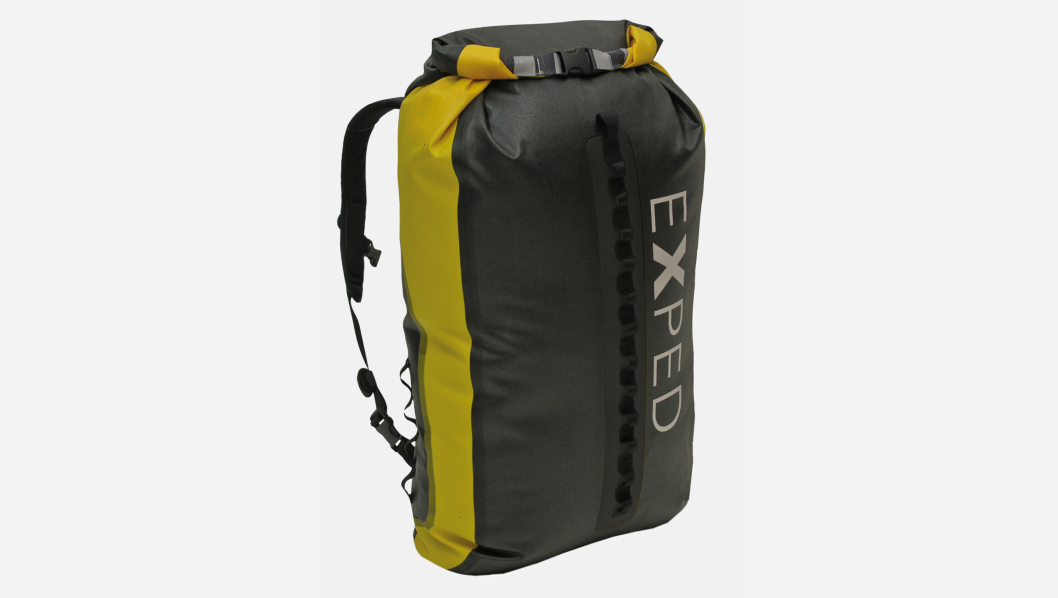 These bags are blummin brilliant, ideal for expeditions (which hopefully we be happening again one day)
Prize donation by UKCAVING.COM

Look what set up home in one of our digging buckets - wasps! 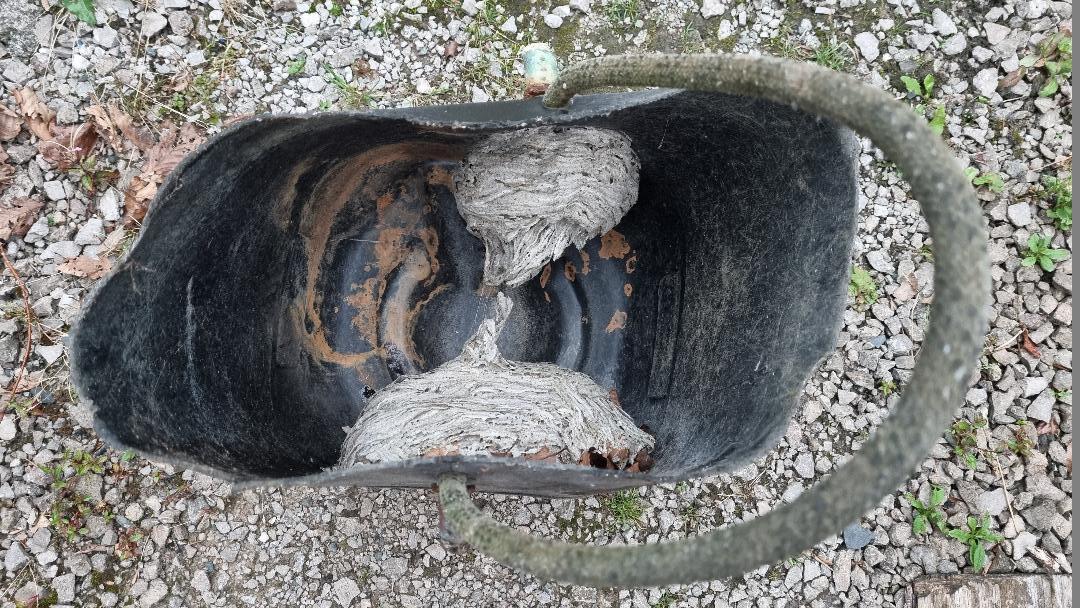 ... and what a fine home they made too.
We left well alone and eventually they moved house.

Gave me the idea for a quick competition - post on this thread telling us any caving/mining related tale abouts animals and plants.

The more unusual the better and photos are always good too.

Shortlist to be chosen by me then it's over to Random.org.

Is it just me or does it look like a curled up snake in the bottom of this bucket ?

Two examples from the Peak and N Wales of the fruiting bodies of fungus, so neither flora nor fauna! If they dont count, well exclude them from the draw
Both are growing on timbers in old mines and appear to be dry rot

Timber sprouting what looks like legs with nails - Wapping Mine.

Whilst hands and knees crawling in deepish water, a shoal of Eels (100s of the buggers) swam past us at speed going upstream.

This was truly creepy with them all wriggling round us to get past.

On arriving at the Fisherstreet Pot entrance we tried our best to free climb out, but it was beyond our capabilities (we hadn't intended to do the through trip)

The only way out was back the way we came, which was like a horror movie, knowing that at some point the buggers would be coming back.

We didn't see them again, I don't know where they went maybe they went back while were were clowning around trying to climb out of Fisherstreet Pot

Staff member
Just loving the entries in this competition (studied biological sciences as Uni all those years ago, so finding your tales fascinating).  Thanks so much to everyone who has entered so far, do keep 'em coming
M

I keep my tackle bags squished flat on a shelf at the back of the garage. One day, whilst pre-packing a load of rope for a trip (get me, all organised), I picked up a bag and thought "that smells funny". As usual I inserted my hand through the top and did the whole "flappy flap" to open up the bag.  As soon as I "flapped" once I knew I had a problem. The smell was overwhelming and as I opened the bag I realised I had now a very, very, very dead, aromatic ex-frog smeared all over my hand and wrist.

I immediately felt very bad, and also ran to my chemical shelf to liberally douse my hand in bleach to get rid of the smell. The tackle bag was deemed beyond rescue despite several baths in bleach.

As such I am one tackle sack down.

In 2016 I decided to take a trip to Wales with a few friends, Mike and Pete, In the heart of winter, The hillsides were beautifully covered in snow in Mid-January the sun was shining, It was a perfect day for a spot of mine exploration, It was the first trip out in the new year.

While having an explore, I found this growing inside the mine i have no idea what it is, maybe one of the members of this forum will know

I think the first photo may be a slime mould of some sort?

They are fascinating in their own right!

Indeed. I believe they have been used for biological computers. Modern classification puts them with ameboids rather than moulds.

I'm sure I've told this tale on here before, but  might as well tell it again...

Close Encounters of the Furred Kind

A few years back, I was on one of the very occasional inspection visits to Yatestoop Sough which on this occasion had been organised by John Gunn. I'd been late getting to the meeting point, and so followed the rest of the party upstream but when I did catch up, it was mentioned that an otter had been seen heading up the sough in front of the group. I didn't think more of it at that point, and headed up the branch to the main shaft where I caught up with John. He was preparing to take some water samples and asked me to hold his tackle back open; the water at that point being thigh-deep and swift-flowing. While he was filling his bottles and I was holding the bag open, all of a sudden the otter erupted from where it had been hiding and shot between my legs. Whilst it is a privilege to see an otter that close, it's also quite a shock and I couldn't help but think they have very sharp teeth and a strong bite, and this one had passed very close to an extremely sensitive part of my anatomy...

Haha, I'd decided not to mention that episode. But now you have, it swam through my legs too as we were heading up the sough! Actually there were two of them, and they split up, one running off up the crosscut to Alice shaft. And they didn't even have headtorches. We found three 'nests' a long way up Magpie Sough too in 2018 that had to be from otters. A large trout swam through my legs right there on that occasion. The pic below was taken in Cromford Sough, 2015, on the last trip we did with Jon Humble.

We've all heard the jokes about sheep being nervous when they see men in wellies. However after a trip to a well-known Yorkshire pot in 2011 it was us who were worried by the sheep!

The sheep theme was the inspiration for this scene from Hey, Hey, We're The Dudley

Rather than admitting to being lazy, I'm going with the fact that I usually share any interesting cave wildlife stories on here anyway, so I'm just ahead of the game  :ang:

I can't imagine that it would have survived getting washed through the whole cave, even if the stream flowed that way (which it doesn't), so I can only assume that it grew there.

How on Earth did it get enough to eat to grow to that size, and how long must it have been there?
Click to expand...

And for good measure, here's a photo of a different underground frog, in an old dig of mine

my first srt trip was water icicle and we found a tiny froglet at the bottom. it was all in the spare rope and well hidden til it moved. we think it fell down the shaft