Staff member
[size=24pt]WIN A RAB SOLAR 3 SLEEPING BAG WORTH ?135!!!
[/size]
Lockdown will end, we will be out and about again!
In readiness the lovely people at Rab have given UKC a gorgeous sleeping bag as a competition prize - thank you, Rab

To enter, post a photo of a camping trip you've been on with a short description telling us about it. Extra points for inspiring/fun/interesting photos and tales to cheers folks up and I am sure that's what we all need at the moment  :hug:


Max 3 entries per person.  Closing date Saturday 13th February at 10pm.
Winner to be chosen by me - I'll choose a shortlist, then over to random.org

Once again, thank you Rab - fantastic supporters of the forum 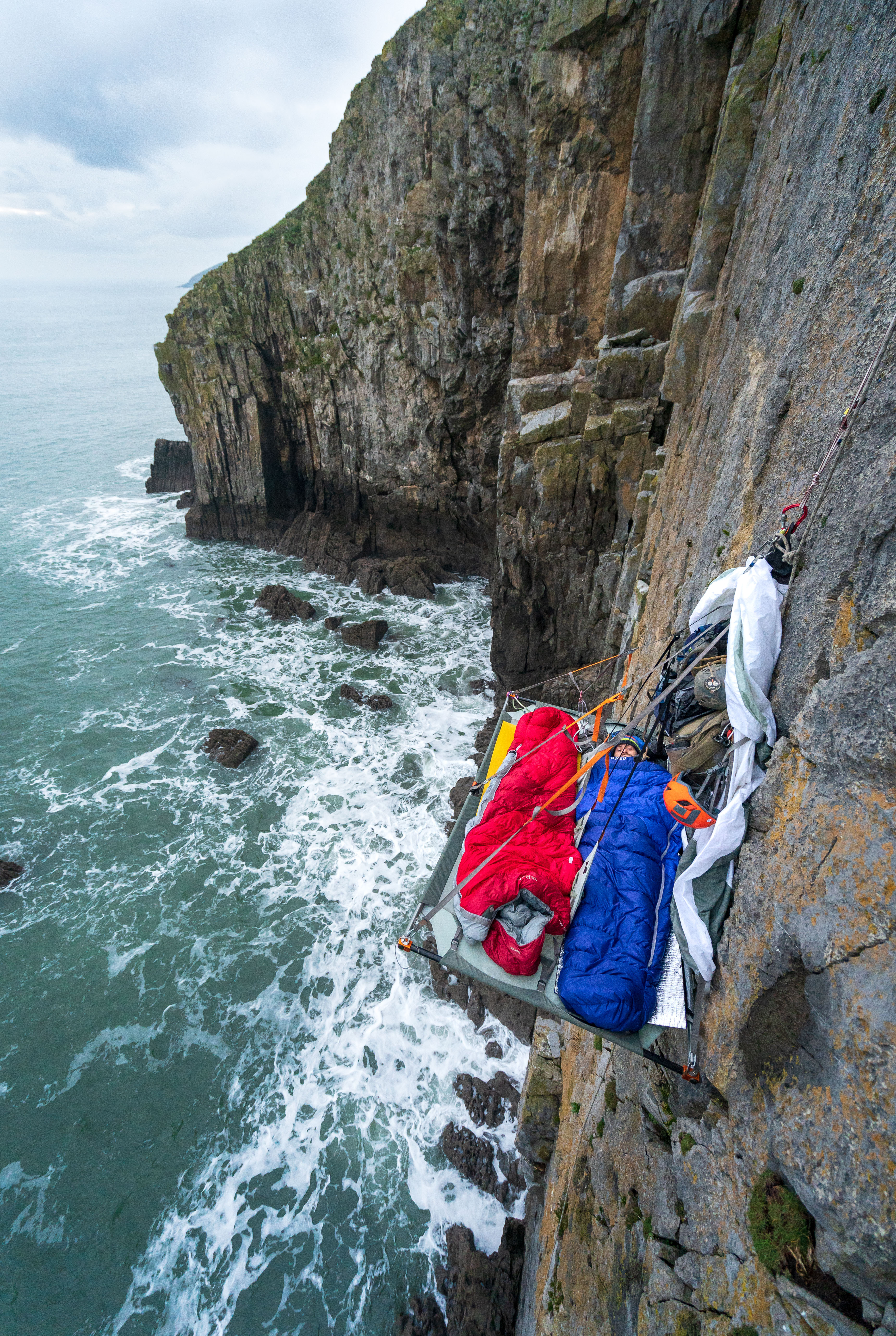 https://ukcaving.com/board/index.php?topic=24601.0
A previous winner of a Rab sleeping bag took this shot!

Krem Phlang Karun. Taken whilst on expedition in Meghalaya, Northern India. As this cave lies close to an active quarry which blasts daily through to the afternoon we were not be able to access it until late in the day for surveying, exploration and bat species analysis and so we made camp at the base of the entrance chamber on a fine sand beach.....those were the days. 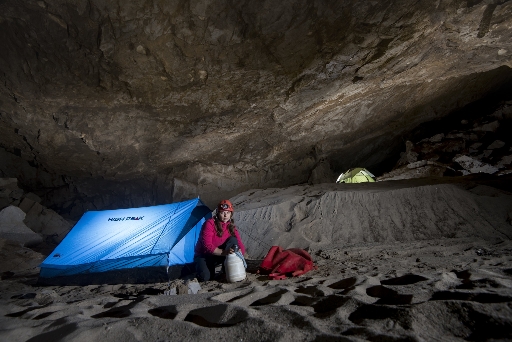 Sent from my SM-M315F using Tapatalk

I haven't got a photo to hand, but during my student days, I used to regularly hitch hike up and down the country between Somerset/ Devon and Durham. Many a cold night was spent under a bush, or road bridge when the lifts ran out after dark...

Fortunately such adventures are behind me and I'm more used to the comfort of the family campsite now.

This was our last trip to Wales (in August 2019!), when I even managed to borrow a pickup from work to complete the experience.

My first underground camp was in Baker's Pit, Devon in 1985 for EUSS's contribution to the student rag week to raise money for charity.  It was supposed to be a weekend underground but turned out to be from closing time at the Waterman's Arms one evening until opening time there the next evening.  Two years later I camped at Hard Rock Caf?, in Daren Cilau for what was probably one of the first tourist trips to the Hard Rock Extensions.  It was the same weekend as Acupuncture Passage was found - the link to Borrowed Boots' Streamway and The Restaurant at the End of the Universe.  Several camping and digging trips in Daren followed before we switched our sphere of operations to neighbouring Agen Allwedd where we established a bivvy site at High Traverse Passage at the bottom of Southern Stream Passage.  There are photos of this in some book or other.

Here's a more recent photo of me at the divers' camp in Wookey Hole Chamber 24 (photo by Craig Holdstock).  The tent was originally taken in to Chamber 22 to use as a shelter whilst I was waiting with Gavin Newman to be "rescued" as part of a sump rescue exercise for RESCON 2019.  It was subsequently moved to Chamber 24 to provide comfort for divers supporting long dives in the far reaches.  Since October last year is is possible for non-divers to reach the same place.

I could do with a new sleeping bag.

In the Dolomites near the Marmalade Mountain

Same place so only counts as one (and maybe off-topic?)...
Could have done with something to "shroud" me from the elements, but I could have had a good long sleep there...

Not certain if this will cheer anyone up, but I am sure people will find the following story funny, even if we did not...

Brexit day exactly one year and a day ago: Me and John could not bare the thought of all the celebrations of self harm, being avid remainers, so we decided to get away from it by camping underground, to forget about all the crap for one day.

Anyway we had originally decided Sand Caverns in Bar pot, but John was not keen on the idea, plus it's not allowed, so John suggested an alternative venue, a little known cave in grit stone called Fairy Holes, near Greenfield.

On our previous visit we remembered it being spacious and more importantly dry. However, on the night we arrived it has been chucking it down for many days previously.

So when we got underground it was very drippy to say the least. Still we bedded down to try and get some sleep.

John was snug in his waterproof liner, inside a sleeping bag. And me with my feet in a tackle bag and my coat offering limited protection from the drips. DRIP a drip hit me in the face, DRIP, a drip hit the tackle sack. There was no chance we were getting any sleep on what has to be the most miserable camp I ever tried underground. Suffice to say, we left just after midnight, driving past the celebrating pubs we tried to miss by hiding underground on the way home.

Wish we had gone to sand cavern.

If we are only allowed one photo can we choose the bottom one please as the actual photo entry?

Wish we had gone to sand cavern.
Click to expand...

Like what Miranda did for her 40th birthday (picture with noone identifiable chosen!):

Not a caving trip but, we went sea kayaking in the Highlands and decided to spend the night on the shores of Loch Teacius, as the open sea was too windy. Set up camp on the grassy foreshore, nice meal, fire to keep the midges away, watching the tide slowly rising. We used a line of stones on the beach to gauge its progress, convincing ourselves that it was going to stop soon. We refused to move the tents and we were lucky, the edge of the loch just reached under the fly of my blue tent but didn't quite reach the inner. Canute had nothing on us.

Photos from a trip to the Lleyn Peninsular a few years ago. It was April and very cold.

Photo taken during the 2017 september Anialarra expedition. Where we were surprised by snow in the morning. Our altitude basecamp is situated at 2100m.

A room with a view The 2nd photo is the altitude basecamp seen from above (wihhout the snow).

This is from around 1989-1990. We used to go camp 2 nights in Smallcleugh mine, go up on the Friday, to the Rose and Crown in Nenthead - drink a load of beer, then around 1am kit up in the car park, head down the mine with food and beer for another night. North End Flats was our base. Canvas camp beds with steel tube frame. Day of explore on Sat, booze up, out on Sunday.

On an more sedate theme, first time camping with our daughter - Knight Stainforth. 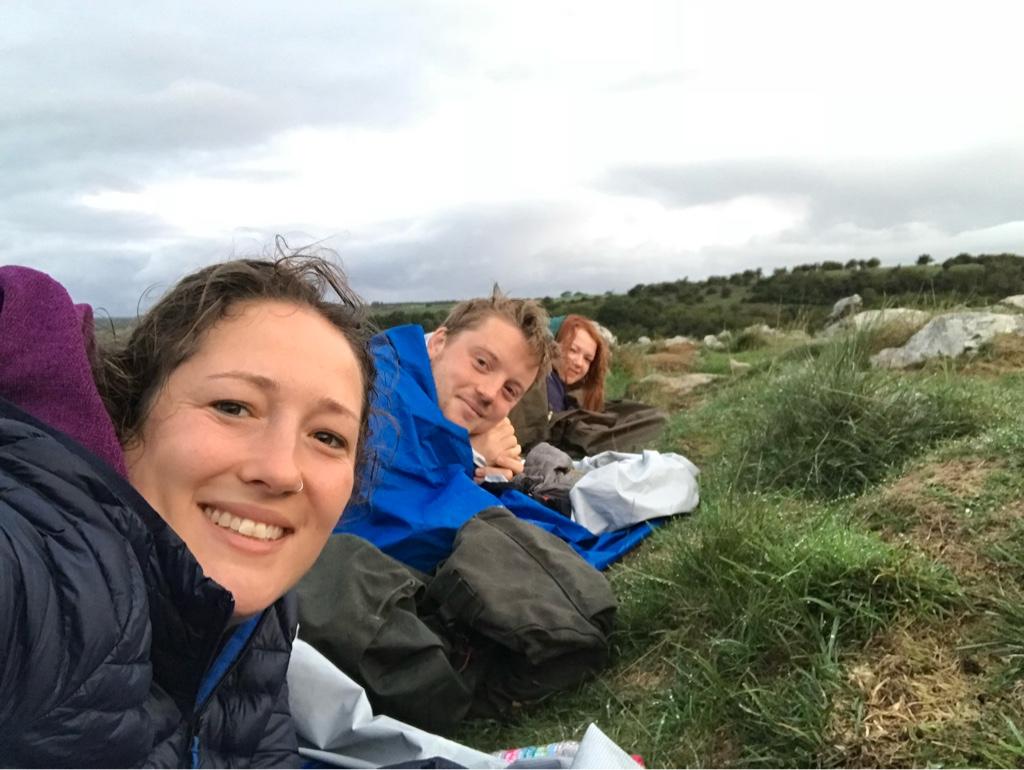 In Sept 2018 I decided one evening to pack a bag, walk from my front door and have a camp out for the night. I packed a warm dinner in Tupperware knowing that it?s warmth would decline the longer I took to find my destination.

Living in Cheddar means plenty of countryside on the doorstep and I headed off up the hill with the aim of camping on top of the gorge to see a lovely sunset. Well I missed sunset with my faffing but I made it up there easily enough and found my idea spot, set up bed, got in and munched my dinner.

Meanwhile I had messaged a friend to tell him what I was up to. It was an open invite to anyone, although I was also quite happy sleeping alone under the stars. 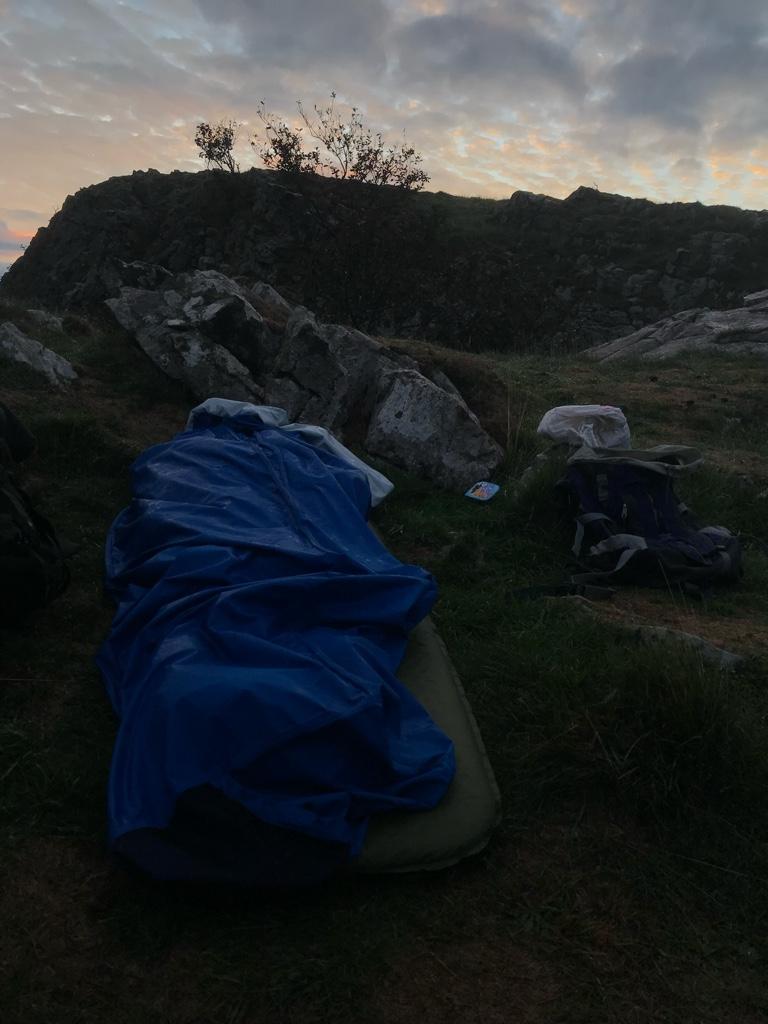 The dark set in and no word of anyone else joining me so I settled into my bivy bag and started to drift off to sleep. Soon I heard voices and it was my two friends coming to join me, struggling to find me in the dark. They had come out for the night as I?d checked the weather forecast and it said it was going to be dry over night.

During the early hours it started to drip, and it got steadily wetter. Can?t say it was my best nights sleep, and I woke up with a puddle in the hood of my sleeping bag. But the morning sky was superb, and our quick goodbyes, walking separate directions, I was soon back home ready to start work for the day, taking advantage of my home working job (in the days before everyone worked from home). 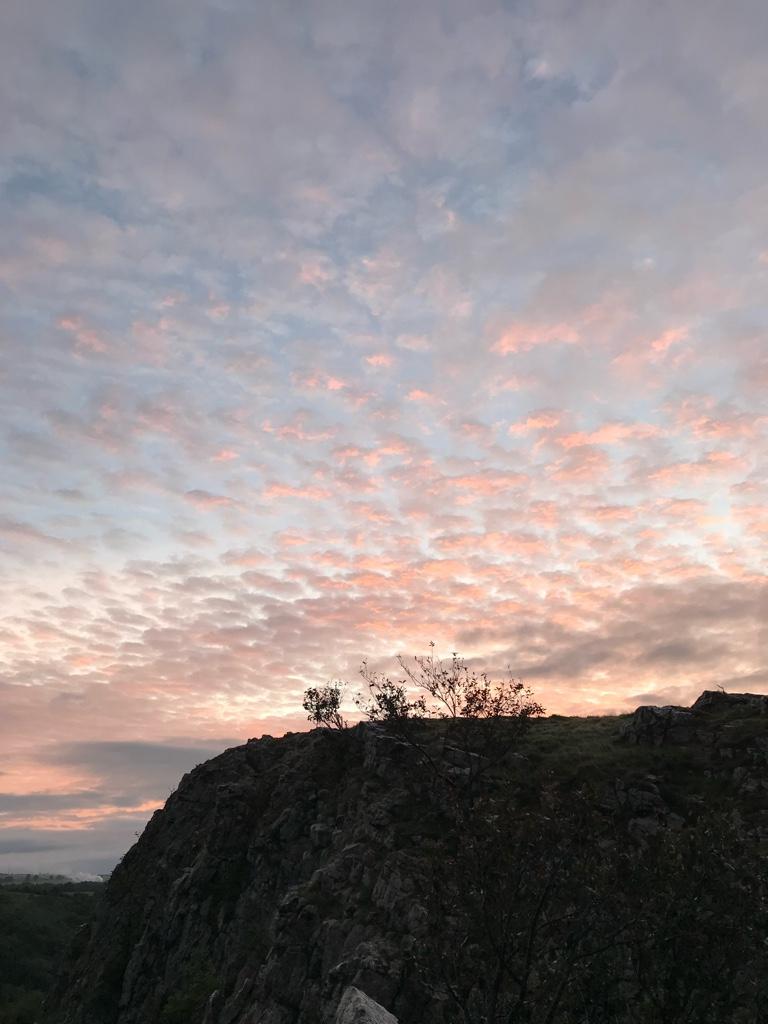 It was a fab evening out, a brilliant reset using plenty of fresh air and walking from/to my front door made it even more fun.

Caving related, in that everyone there was either a member of, or friends with a member of the same caving club. Treking in Ladakh in 2004. Despite being over 3000m in altitude, the weather was pleasant enough to bivvy out on many nights. Crystal clear skies overhead and watching the Milky Way, shooting stars and satellites.

Leclused said:
Photo taken during the 2017 september Anialarra expedition. Where we were surprised by snow in the morning. Our altitude basecamp is situated at 2100m.

A room with a view The 2nd photo is the altitude basecamp seen from above (wihhout the snow).
Click to expand...

And last but not least a view from our campsite from very hight in the sky These aerial photos were taking in august 2017, at that moment a third tent was in place.

If you scroll out you can see the vast wilderness where our campite is situated  The hike from the parking place is minimal 1u15 depending on the conditions and the weight of the backpack and if your driver was able to reach the highest parking spot.

More cavers doing non-caving things.
Again, members and friends of the same caving club. Trying to climb a mountain called Daxue in Gansu Province in China. Our plans were thrown in to disarray as our permit for the original location was cancelled by the authorities a week before. This expedition was thrown together at the last moment by our member on the ground who has a trekking company in China. Unfortunately, the walk in had to be rather tight on altitude acclimatisation and a couple of people (including me) spent our time at base camp feeling very poorly. The summit bid didn't succeed, but all had a very interesting time in this remote part of the country, as well as in the cosmopolitan city of Chengdu.

To the camping! Base camp was on the moraine of a long glacier, so there was a cold wind flowing down it pretty much without stop. Well below freezing at night. A good place to take a Rab sleeping bag, which I didn't have, so I was chilly!

Yet more cavers not going caving. This time the Isle of Rum in 2012. A group of us did a multi day walk on the island. One night wild camping, another in a bothy. This one is of the camp.

Our campsite on Mount Roraima in Venezuela which fast became known as El Hotel Bastardos.  Our small party was approached on the first night by a member of a large group from Explore Worldwide who were camping a long way from us (hooray). This chap came to ask if we had any spare bog roll and  would we exchange  it for a whole bottle of rum. Silly boy - snapped his hand off.  It was Christmas Eve and that rum went down well along with another we had with us (which also contained some strange greenery care of Riccado our guide). My husband spent the night with his head out of the tent  having a dinner refund. Next morning we were  up early for the walk off. Still pissed and a bit dizzy. It is amazing how a 3000ft drop can sober you up in an instant.