We?ve had a sustainable source for 60 years, but people lost sight of the big picture in this country and ran it down to the point we barely have the engineering capacity  to even think about rebuilding it. Immensely stupid.
G

Why do I cave? The light, dark and the naked truth.

Where I feel my lightest is where it is the darkest. I always used to love mountaineering and the freedom that it gave or kayaking in the middle of the Indian jungle where there is nothing and no one, no signal and as remote as possible. Now you can get signal nearly anywhere you are even if it is just on a sat phone; except in a cave.

The feeling of being so alone and vulnerable, stripping you back to human instincts of just surviving is what I live for. And where it is the darkest in a cave; whether in a hard technical crawl or just lay in an enormous chamber; there is no better feeling to me than to turn off my light and reflect on life itself, always helped by deep and distant rumbling of a stream. The feeling of positivity and wellbeing that I gain from this gives me the endorphins to continue my underground journey; whether it is a 2 hour or a 12 hour trip.

Some days you return to surface in the dark and others in the light; either way I feel reborn every time I re-emerge; though to come out of a small hole in the ground on a sunny day and remember the world as we know it in all its glory with its colours glistening will be something I will hold onto till the day I die; this will be the light at the end of my tunnel.

Staff member
Until yesterday (8th December 2021) this short drop inside a new cave had never seen light.  Ever since it was created by geological forces it had been in the darkest of darkness - until yesterday - when the first light was shone down it by explorers.  As yet undescended, who can imagine what features might see the first light beyond here.  A life of complete darkness has ended.

Looking down Roman Shaft on the Great Orme, Libby is backlit in the foggy shaft... Well, ok someone had been vaping and the draft carried it all up pitch! We had an amazing cross over from Treweeks Shaft around the levels at the bottom, then back up to the cross cut to this shaft. Plenty of artefacts and minerals including some nice cobaltian calcite. It was a great trip with the GOES peeps

Leanne and Libby outside Odin Mine, in the warm bright sunshine, but dripping with the grey / black shaley goo from the underground. The contrast was particularly sharp as it was accentuated by the heat of the day. Walking back to the car we passed some tourists walking and cycling. Sadly none of them took up our offer of free hugs!

From the cusp of light and dark, Gary is crossing the boundary into Jackpot / P8. Water levels were low and the weather fine. This little climb can be like this, or much more "sporting" but when it is a vertical sump of silent swirling muddy flood water it is not so appealing

This film is an attempt to show the relationship between mankind and the cave. The cave has been forming for millions of years and will continue for eternity.
By comparison our visit?s are fleeting, but the blink of an eye.
And after the cave returns to darkness, and by infinitesimal amounts continues to develop.
The process of cave development proceeds endlessly.

The sequence from about 1:58 is made up from clips that were taken Ogof Ffynnon Ddu on 2nd September 2017.
The first clip is of cavers walking along the entrance passage. Almost no front lighting is used and so the cave passage is revealed only by the cavers' head torches as they progress along it.
This is overlaid with a second clip of water dripping into a calcited pool.
The cavers have been slowed down a little to give them an etherial/ghostly motion and the water drips have been slowed down 10 times to reveal the beauty of the patterns the splashes make.
The effect produced by blending the two sequences together is quite subtle and it may need to be watched a couple of times to appreciate what is going on. 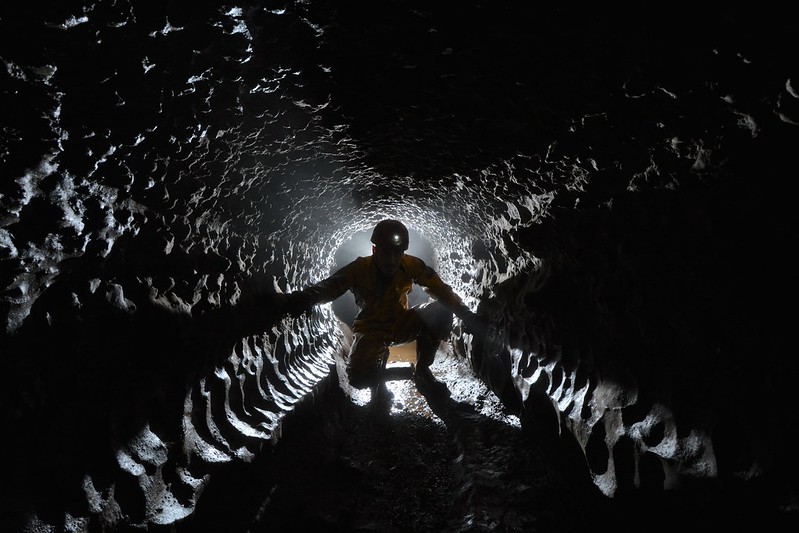 Luke in Cockle Passage, Carlswark by Jon Pemberton, on Flickr

Perfect end to a fantastic day underground with amazing friends. This is what caving is to me.

I have gone quite literal with my interpretation of Light and Dark. This song is about a time my light died on a pitch and I was a tad dramatic about descending in the dark.

For added pun, it is to the tune of Dancing in the Dark.

Double points if you put up a recording?

It had been a long trip down Darren and I was knackered. But the only way our of the dark was to keep going. This I did in some sort of trance until I came upon a pair of boots.....standing upright. I was several feets out along the quarry floor. The boots were my husband's. The hystecical laughter was also his. Where there had been light there was now dark.

Double points if you put up a recording?
Click to expand...

With those chords you could rap it over "Love the way you lie" Eminem/Rihanna, not exactly my cup of tea as the original but as an underground rap it could be a great improvement

Returning from a trip to the Far North in Dan yr Ogof years ago, I noticed my Speleotechnics FX2 getting dimmer and dimmer. After reaching the show cave section, I was left behind stumbling in the dim light until I realised I was bent double just trying to see the floor of the cave with the dim red glow which was all that was all that was left from my light.
I heard a noise as someone realised I was missing and had returned to find me and the amazing man-made sunrise as he got closer and closer and the unbelievably blinding light from his headlamp as he rounded a corner, as it seemed to my eyes which had got used to the dim red glow.

After asking what the hell I was up to he loaned my his spare light - I had none of course - which was an old Petzl Zoom with knackered elastic headband. This didn't matter as I just held the light gratefully and continued towards the entrance.

As the show cave was now closed, we exited via the "caver's entrance" via a small trap-door above a clamber down to the river. As I needed my hands to clamber down the short drop to the river, I put the Zoom on my helmet and it wobbled around on the stretched headband elastic but no matter.

As I was clambering down, not knowing how far I was above the river, having never used this route in or out of the cave before, the damn thing fell off my helmet, hitting me in the right eye making it water copiously and plunged me into darkness again as it plopped into the river below.

I held on waiting again for some kind soul to shed some light on my predicament, but there was more consternation resulting from the dropped Zoom and where it had disappeared to in the river and it was some time before someone came to my aid after they found their Petzl Zoom.

For a while fellow clubmates referred to me as "The Prince of Darkness" for some reason...
W

One of my first trips with the NCC was a digging trip in Dale Barn.
The same day I was also introduced to the double act that was "Boxhead and Noddy"
When we parked up I was a little overawed at the prospect of the trip and focused on sorting my kit out.
It was only once my carbide was fettled and sparked into life that I felt I was ready and looked around to take stock of the others and see how they were getting on.
Most of them were in a similar state of readiness to me, but two individuals with accents from the North East stood out - Boxhead and Noddy!
Unlike the rest they did not appear to have caving gear, so much as pieces of stuff that resembled what could once have been caving gear. I looked on with amazement as they assembled this collection of crap until there was simply no more they could do, I supposed they were ready.
Both of them had the remains of expedition carbide lights, which were just the same as mine only at the opposite end of their working lives. One had what looked like a broken generator and no back up whilst the other had no generator and was reliant on the back up which had no reflector or glass and was just a bare bulb glowing dimly.
The trip introduced me to the delights of Dale Barn, somewhere I would go on to visit many times whereas the daring duo saw very little of the cave yet I never heard any grumbles.
In the coming years I got used to caving with both of them and the situation rarely changed with barely a moan, but generally even less illumination. I learnt that a lack of cash wasn't a barrier they were prepared to accept and you couldn't help but admire that.
I enjoyed some great trips with them and the only difference between us was how we experienced them - in the Light or in the Dark.

Another mining photo but more light than dark this time. 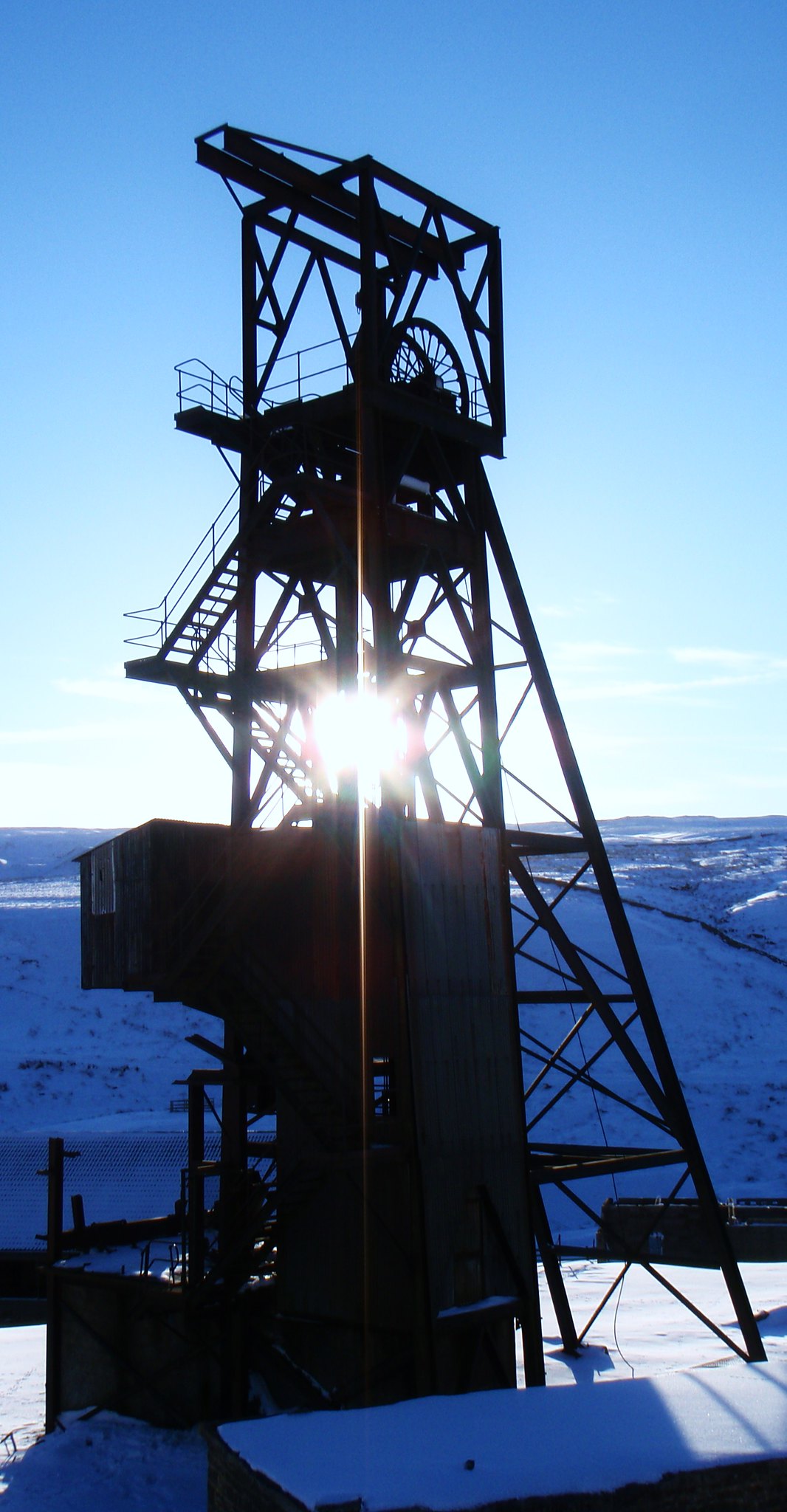 This photo holds a lot of memories for me, from the years I spent in County Durham, where I first started to explore underground. Those who have visited my house will recognise it, from the large canvas print above my stairs, and although I see it every day, it's impact on me has not faded.

Entry no.2
Although this has already been posted on a different thread it is one of my faves which just came out AWESOME and represents the Light & dark theme rather well. 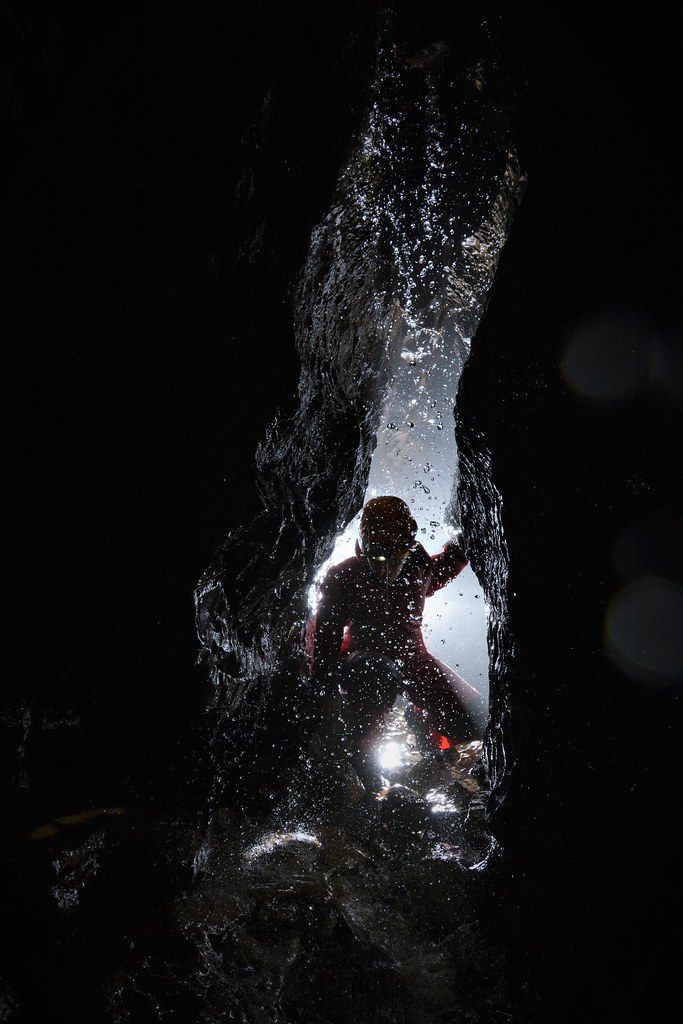 Getting wet in Giants by Jon Pemberton, on Flickr

My third and final entry on the Light & Dark theme.

Just wanted to thank everyone who has entered this Scurion competition so far.

Blimey, judging is going to be tough!!!