Some years ago, while visiting my grandparents on Stronsay, in the Orkney Islands, an elderly lady told me of a cave that went "right through" the island.

The story goes that as children, some 70-80 years ago, they had found a sea cave, the bravest had gone a long way and were convinced it was going to go right through, but they had been scared off by strange noises and had turned back.

I'll be honest, I didn't give too much credit to the idea that it went right through, but a cave that went beyond daylight seemed worth finding.

Well, on my latest visit, I decided to make a proper effort; I identified two headlands with cliffs and sea caves shown on the map, each seemed narrow enough for a connection to be feasible, so I set out to scour the rocks at low tide.

My first day yielded a total of about 20m, spread over a number of typical sea caves and wrote off the first headland, Burgh Head. The second day I moved along the coast to continue my search at Lamb Head. From across the bay at Hells Mouth, I spotted a possible opening and after a sketchy climb down, I found the first serious contender; it felt like a cave and it went for about 15m, but was blocked with cobbles. Perhaps 70 years ago it had gone further?

On exiting, I traversed around the rocks just above the water and spotted another entrance, hidden behind an outcrop of rock. There was no way to get to it from this side (without swimming) but I figured I could climb down beyond and traverse back. Another even sketchier climb followed and an easy traverse brought me to a ledge inside the cave. I could see for 15m or so, but the way on was in deep water. I'm not the strongest of swimmers, so despite the enticing booming echoing out each time a wave rolled in, I decided not to risk it just then. 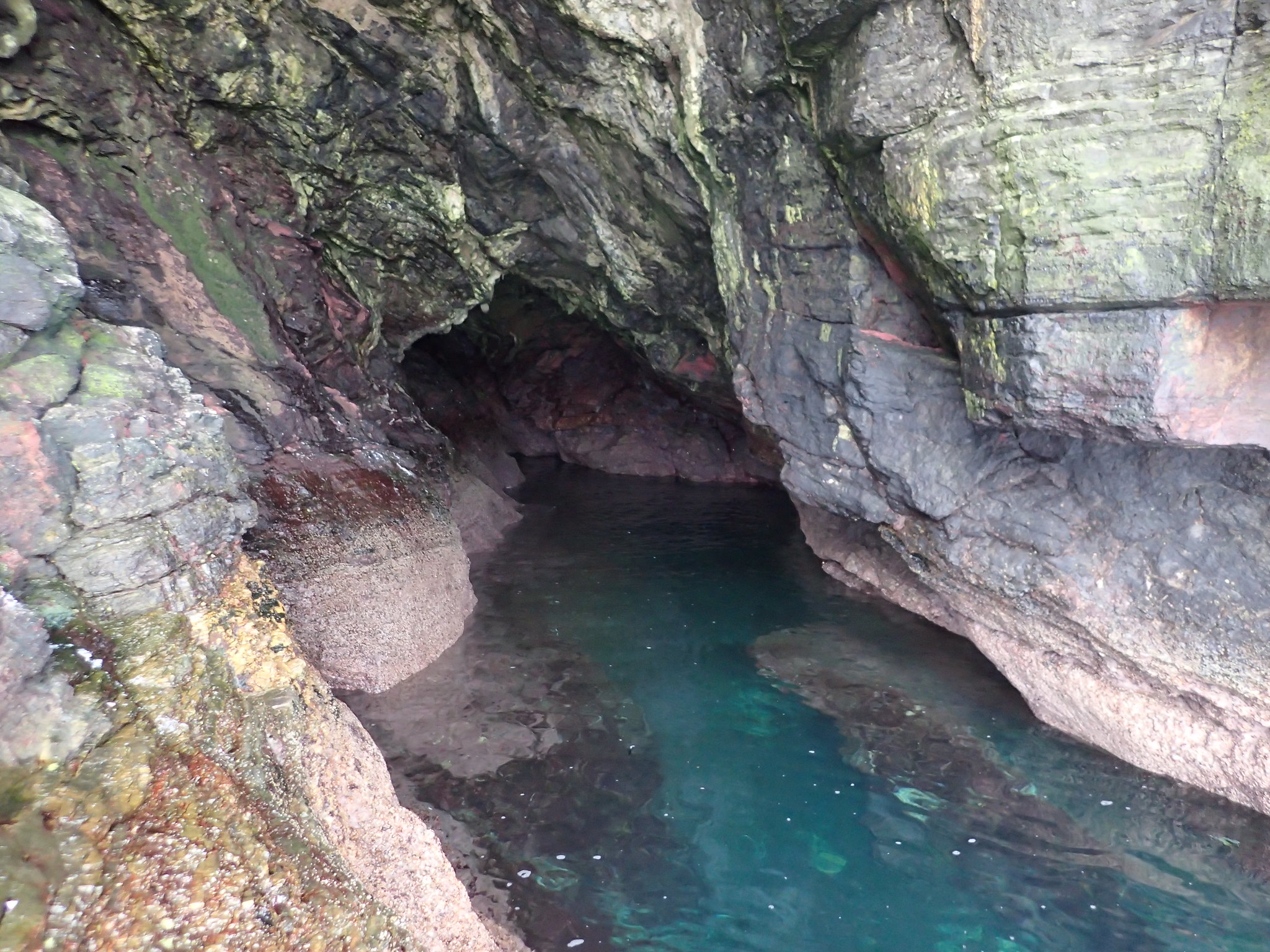 If there really was a cave through the headland, surely this was it!

I made my way back up and across the headland to where Whale Geo (pronounced Waligo) cuts into the island and sure enough, there was a scar at the end of it, another cave!

Once down to the waterline, I found a ledge leading in, but this soon brought me to a shear drop. To my side, the water seemed several metres deep, but due to the shelter from the geo, it was much calmer than on the other side. Ahead a large chamber swallowed my light. As I looked around, a seal swum in beneath me; for the first time, I really thought it might go all the way.

I hurried back to the village on the island to see if I could borrow a canoe or at least a wetsuit and after a few blind alleys, I was lent a long (slightly crooked) kayak which "held water when it was last used". I even managed to borrow a paddle!

The weather turned and I had to put things on hold, but a couple of days later, it was clear and calm; this was my chance.

I paddled out from a rocky beach not far from the first entrance I had found, wondering if it was a wise idea as the canoe rolled heavily in what had seemed from the shore like a very gentle swell. Inside the cave, the swell of the sea was magnified as it funnelled into the passage. As each wave rolled in, I was thrown forwards, then dragged gently back before the next through me further. My venture was seeming more foolish by the minute, but there was nothing for it but to keep on doing whatever I could to keep the canoe in a straight lien and away from the sides. Around a slight corner, the passage narrowed and 10m further in, rocks were projecting above the water.

I didn't fancy back paddling out so, at very least, I had to get out to turn the canoe around. With one had desperately clinging to the rocks beside me I eventually managed to wriggle myself out of the confines of the kayak, so I was sitting on the back deck. To my side, there was a ledge about two or three feet below the water. I a rather acrobatic manoeuvre, I somehow landed myself onto the ledge without loosing the canoe, or falling in myself. I clambered up onto the rocks ahead and chucked the kayak into the calmer water beyond, before going back to grab the paddle from the ledge I had shoved it on earlier.

Ahead, beyond a large pool, were more rocks and continuing cave. Since I was wet to the waist already, I decided to carry on, on foot, pulling the canoe behind.

Around the next corner, to my delight, I saw daylight ahead and was soon dragging the canoe up onto the rocks outside the cave, excited and thoroughly relieved that I didn't have to go back the way I'd come!

That evening, I returned at low tide with my camera and tripod and entered on foot from the Whale Geo side to find the water about two feet lower. 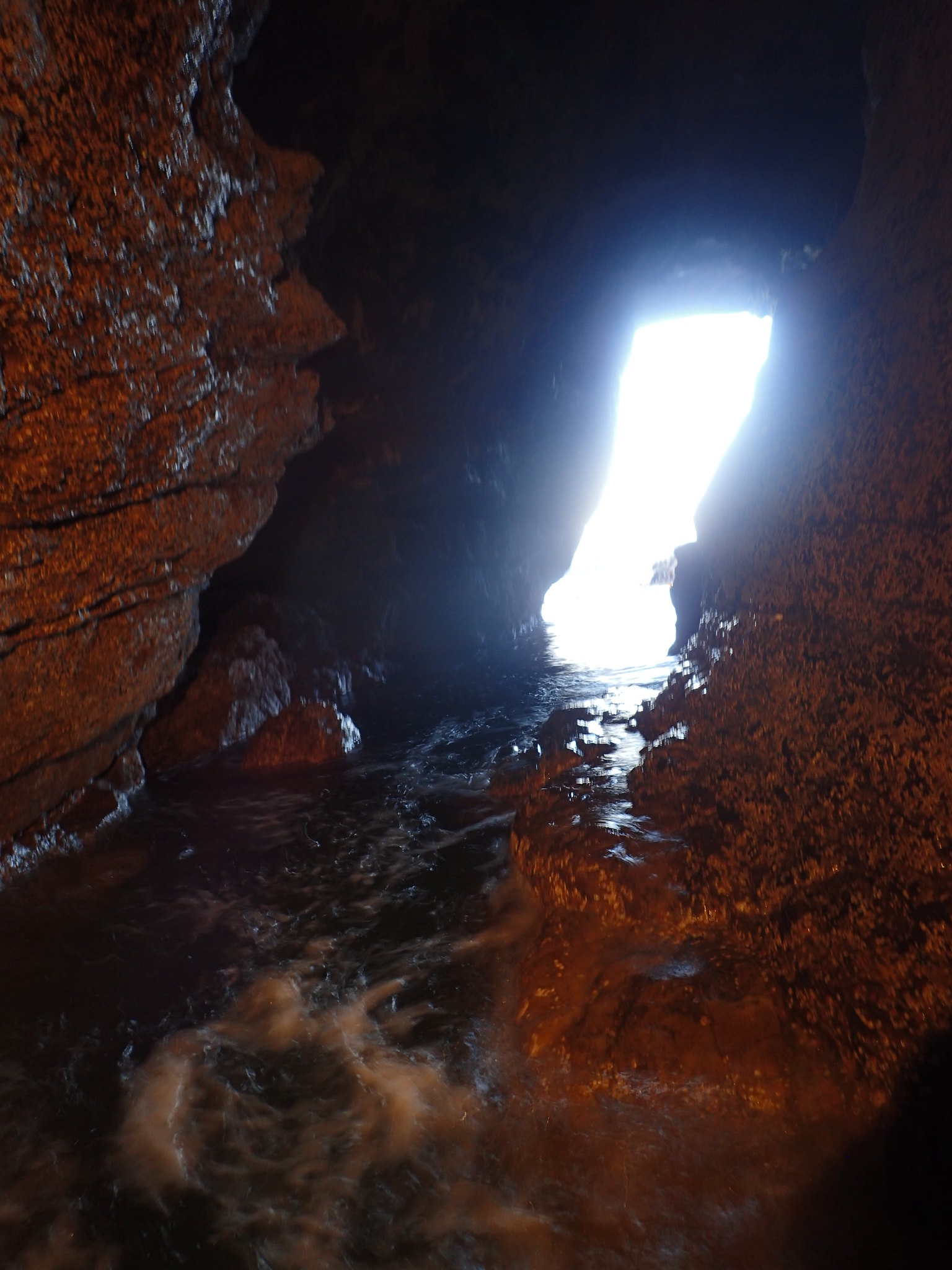 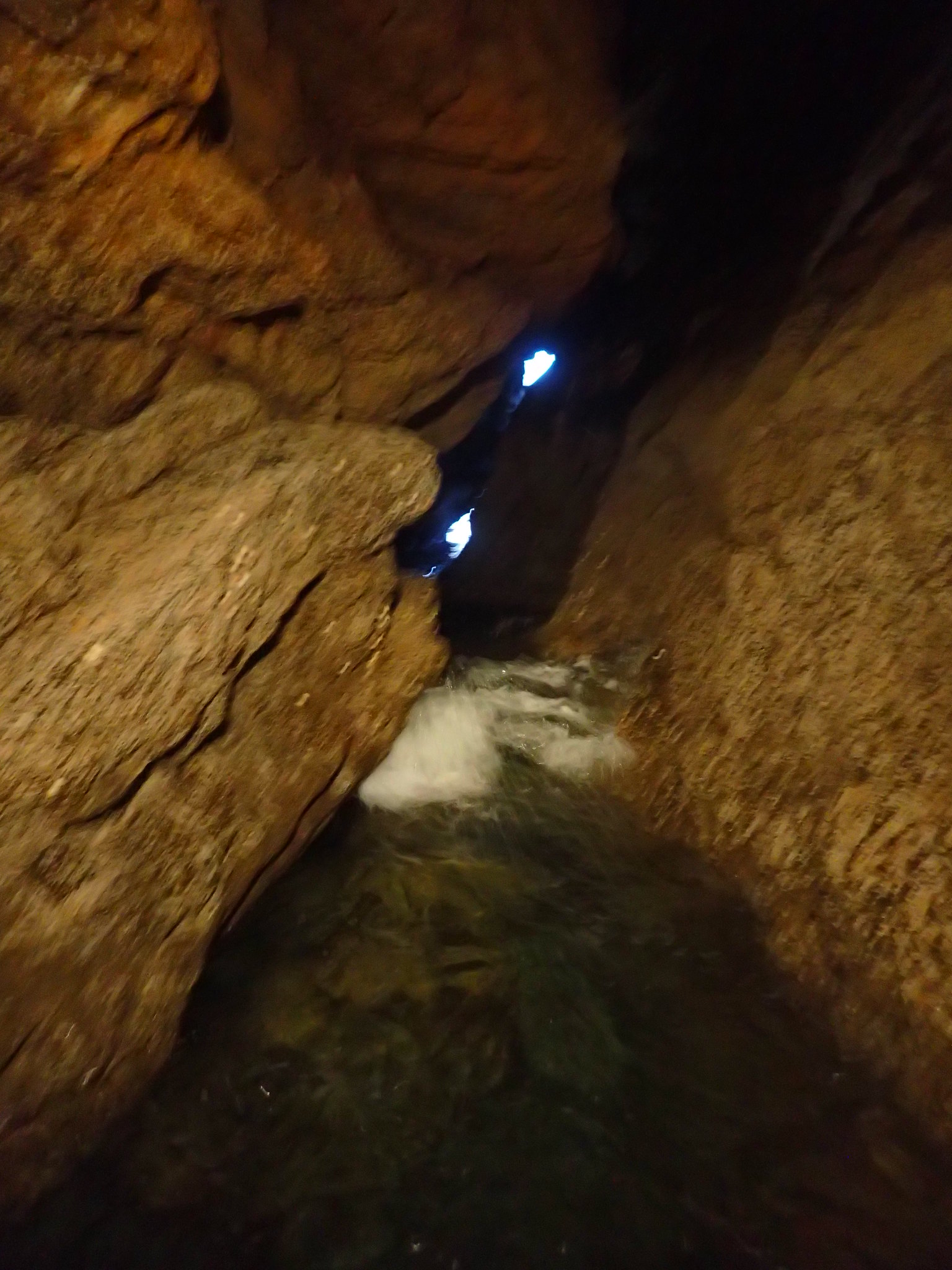 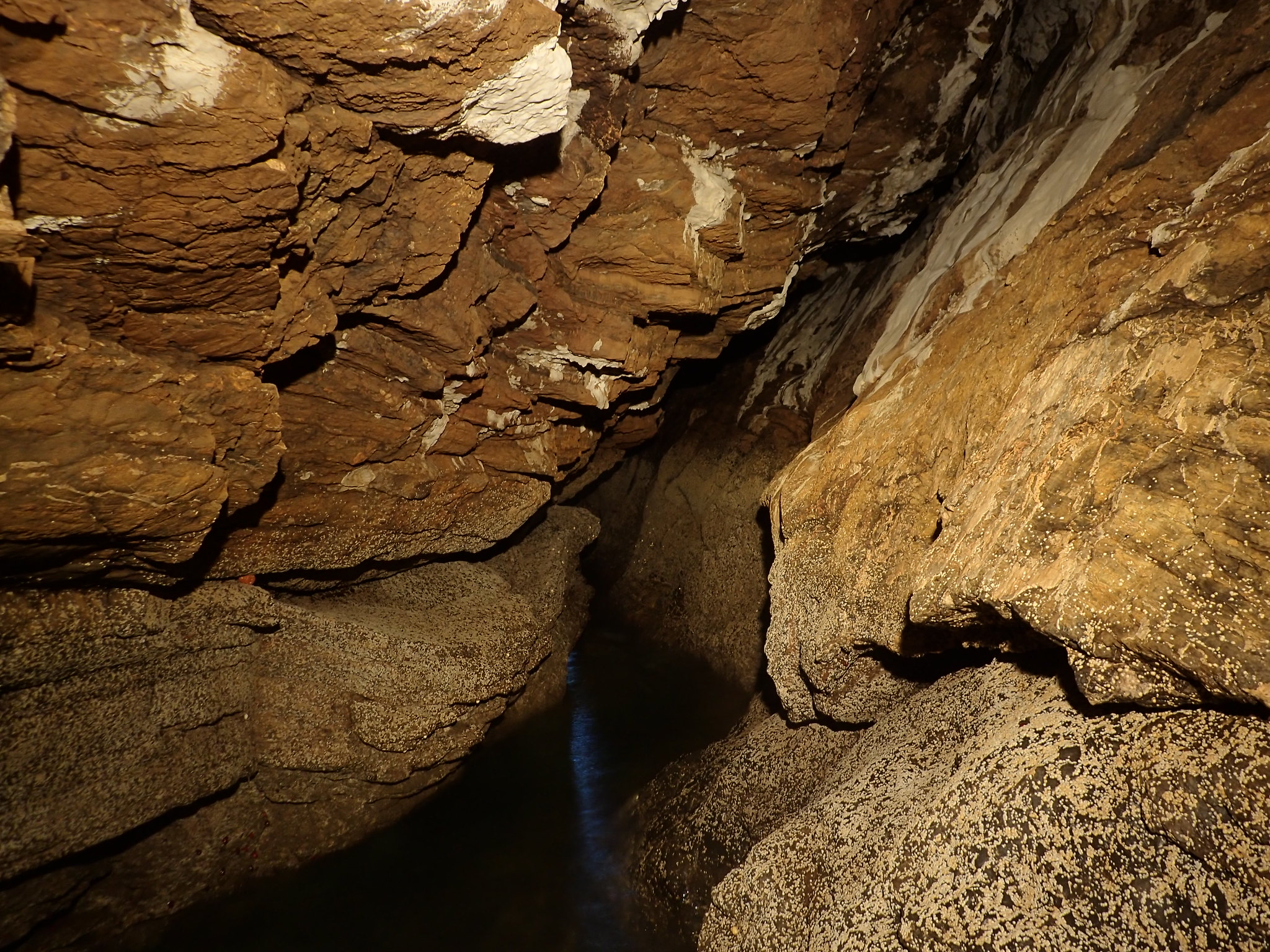 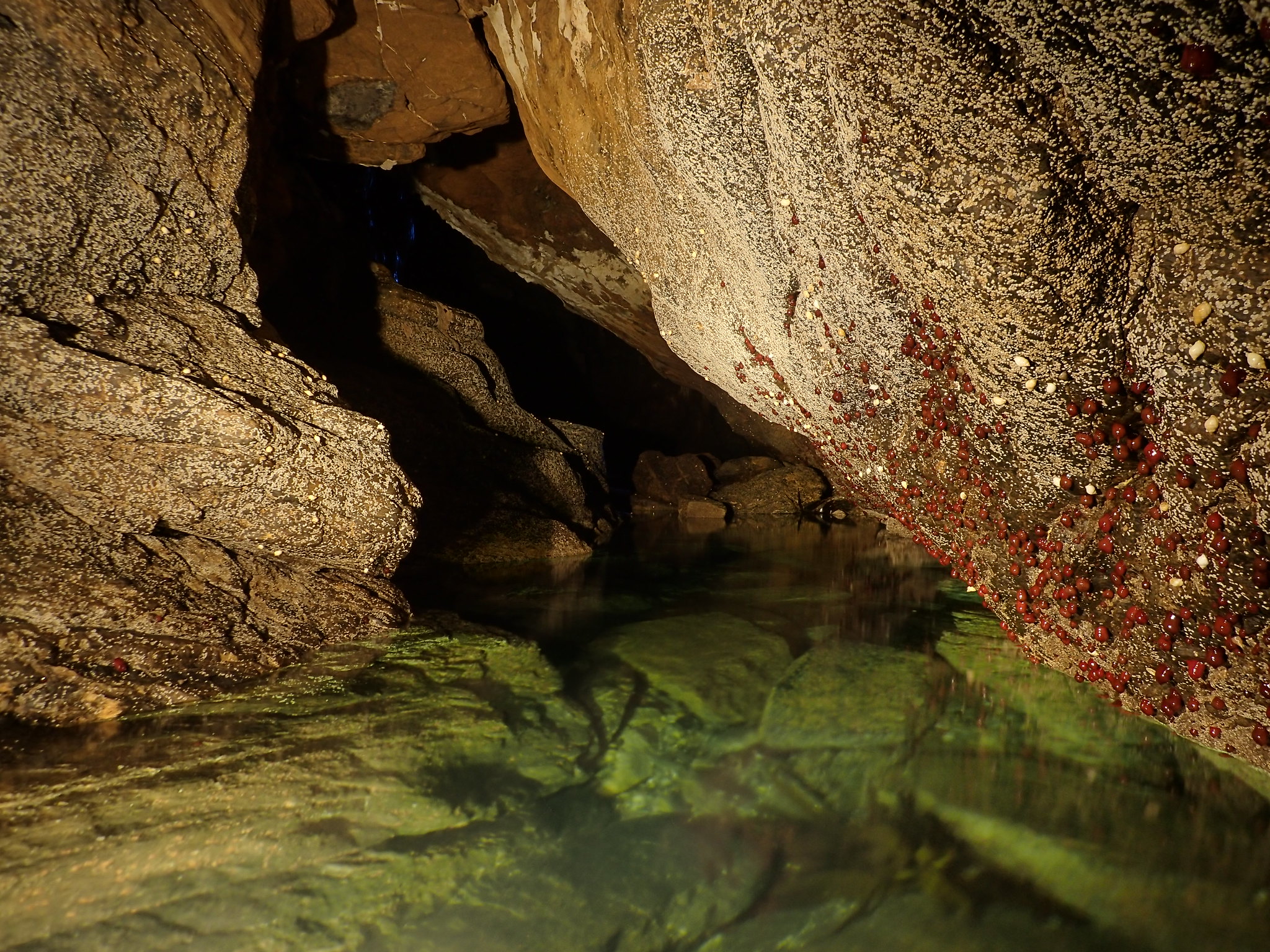 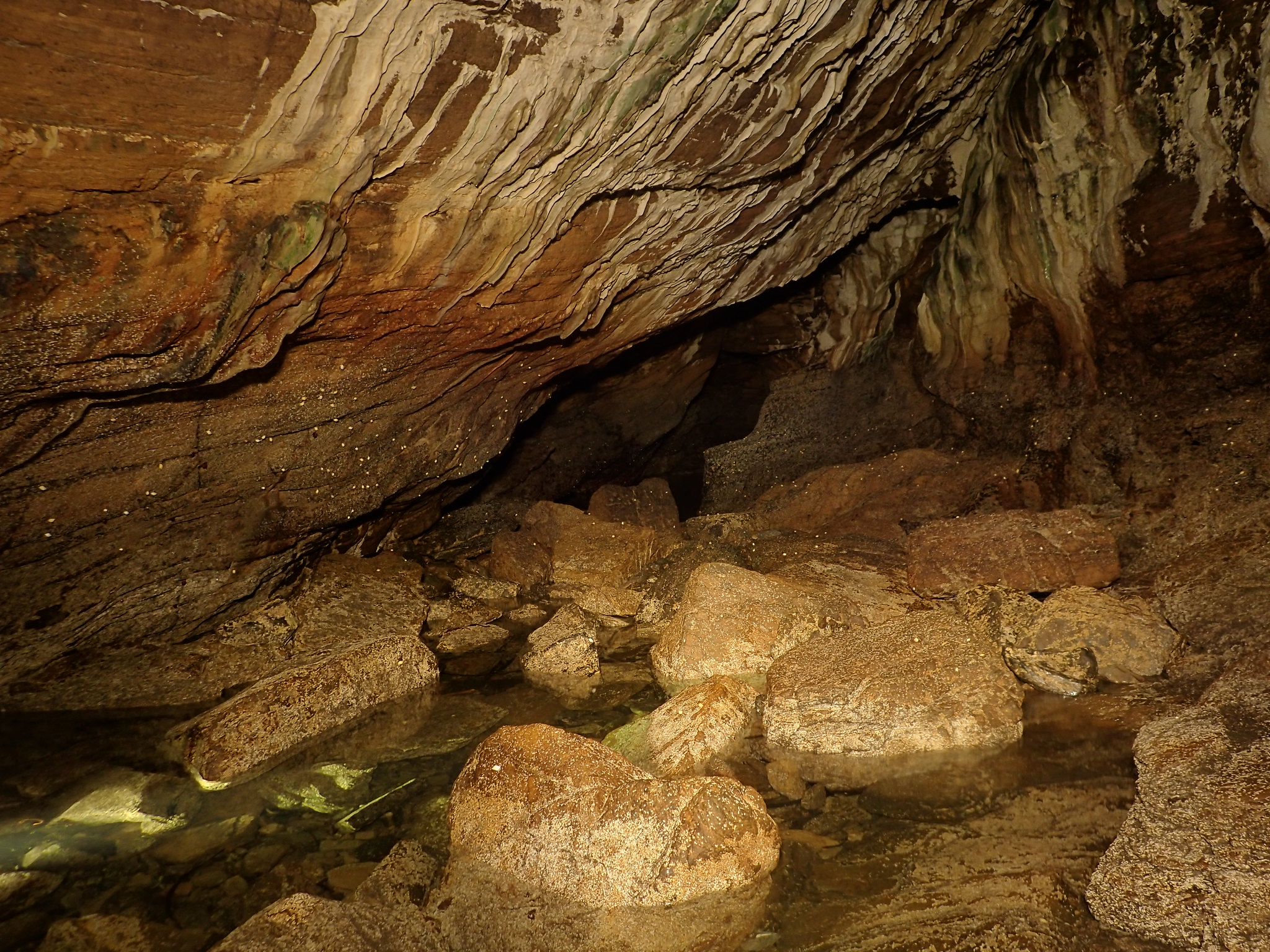 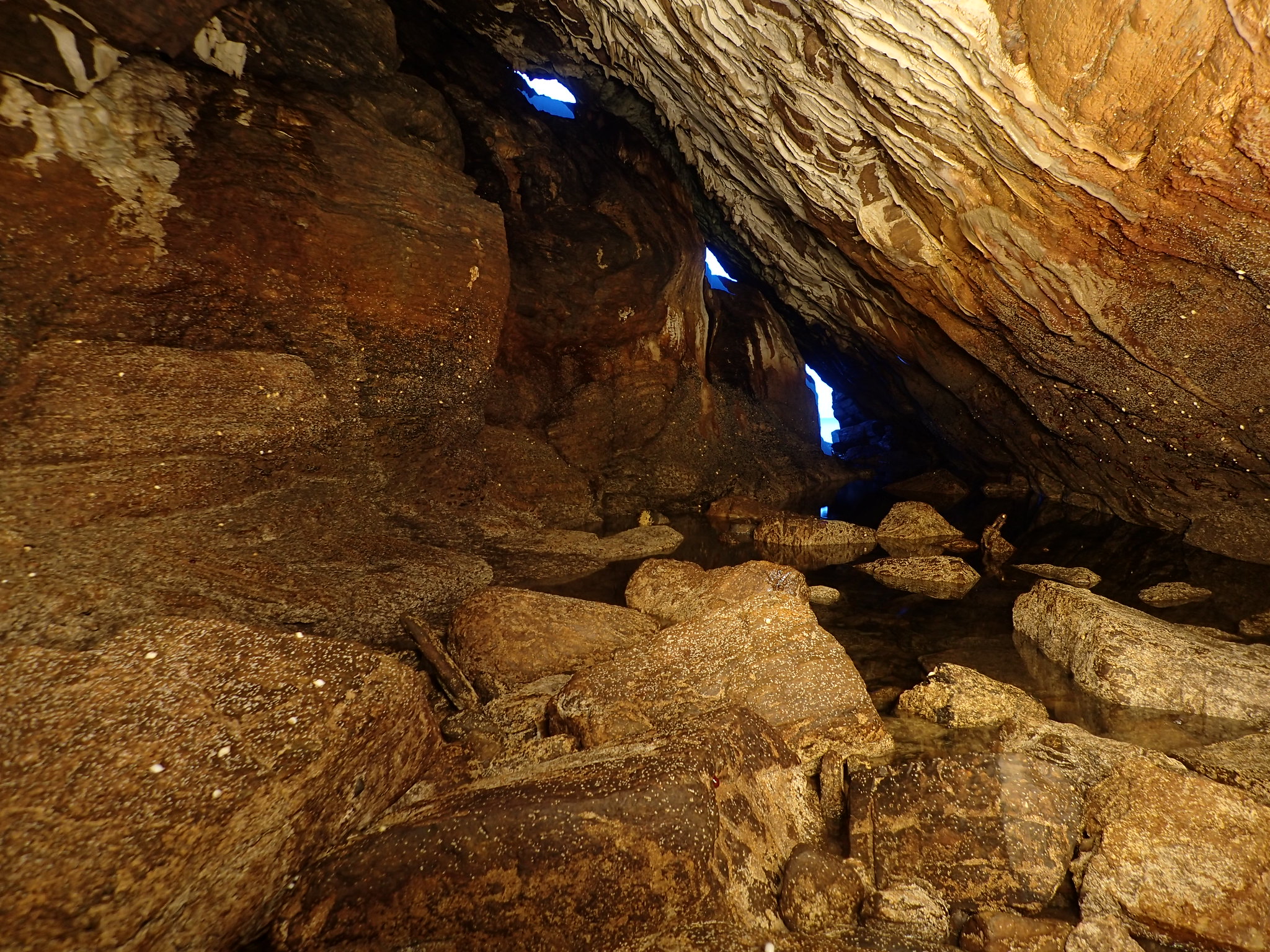 As a footnote, I sent a few pictures and a brief write-up to the island newsletter, generating a great deal of interest on the island; it seems despite the large open nature of the cave, it was no more than a myth to the islanders. The challenge they have set me for my next visit is to follow up on the myth that a lady once dropped a ball of knitting wool which rolled down a hole and was found floating out of a sea cave half a mile away!

captured the spirit of adventure...thanks
M

Have you got an NGR?

rhychydwr1 said:
Have you got an NGR?
Click to expand...

Book has already been written.  Just wanted to add another through cave.  Is it longer than this:

HOLL O BOADIE NGR HU 149 624 Landranger 3
or Bordie.  The cave passes through the north western tip of the island. The cave is 400 m long and wide enough to row through.  This is the  longest sea cave in the world!

It's about 100m long and wide enough to row through if you don't mind waiting for the tide to do one end at high tide and the other end at low tide.  :tease:

Otherwise, it's wide enough to kayak through

It's about 100m long and wide enough to row through if you don't mind waiting for the tide to do one end at high tide and the other end at low tide.  :tease:

Otherwise, it's wide enough to kayak through
Click to expand...

Far too many to mention in Shetland (Holl o Boadie is there)...

A few pictures from Shetland to whet your appetite.

Here are the rest

Are they also Papa Stour? (that island is riddled, but so are several others)

One sea stack we visited had a tunnel running longitudinally through it, but then two others crosswise, so 6 entrances that linked - so looked somewhat like your last 2 pics!

Muckle Roe and Skeld, if my memory serves me correctly, but as you say, the coast of Shetland is riddled with them.
M

Was supposed to be going this summer, but looks unlikely now...

Brixham has a few fine caves in limestone

After 5 years, I'm back on Stronsay and couldn't resist another trip to Whale Geo Cave. This time, I went at high tide. It's not the best bit of cinematography, but it should give a rough impression of the place.