is this going to poison the river?

so this group of people are trying to dig out a copper mine and the digging spoils have leaked into a river,
I do know where you find copper you find sulphur so i'm wondering is this going to be poisonous to wildlife and the environment of this area?
and does anyone recognise this place?

Mine water is generally very nasty stuff, and discharge from disused mines is a significant pollution threat. Without a permit from the EA this sort of release is almost certainly illegal under the Water Resources Act 1991, regardless of whether it's been left sat there for ages gently leaching into the river anyway (which it usually is). In the comments the diggers remark that 'the water is pH neutral, just a bit of iron', which is surprising as it's supposedly a copper mine. It's very difficult to predict minewater chemistry, so you can only really know if it's going to be harmful by actually testing it properly. All this being said, if it's not a lot of minewater and it's brief and well diluted the impact is probably going to be quite minimal. Still irresponsible and antisocial in my opinion, and "brave" to post about it on social media (not that the EA have the time or funds to take any enforcement action). But I don't want to be too critical, I don't think they mean any harm, and it does sound like an accident after all.
Last edited: May 3, 2022

I think we're in danger of making too many assumptions.

The red is iron and if a one-off and quickly diluted won't be a problem. But we don't know the volume released or what's in it, it may be absolutely no problem at all or a bad thing and this is where we are in danger of assuming. I would say that getting a permit in advance from the EA isn't realistic and the EA could better focus on persistent intentional slurry releases etc etc than chasing diggers.

Also responsible digging may reduce the risk of ponding and catastrophic releases in future, so might not be a bad thing. Dunno, I'm getting sucked into assuming too much as well

I'm hoping it's a small one-off and the diggers are responsible, if so..? let's not publicise it further or call our locations. I'm grateful to people who've dug stuff and hoping this one was done sensibly

spelling error meant to write "...let's not publicise it further or call out locations..." not meant "our locations", sorry typo... it's not my dig

Cantclimbtom said:
But we don't know the volume released or what's in it, it may be absolutely no problem at all or a bad thing and this is where we are in danger of assuming.
Click to expand...

Exactly this, which is why this release is a problem.

Cantclimbtom said:
I would say that getting a permit in advance from the EA isn't realistic and the EA could better focus on persistent intentional slurry releases etc etc than chasing diggers.
Click to expand...

Getting a permit from the EA would be absolutely impossible unless you knew what was in it and how much there was (and even then I suspect the turbidity would be too high), which is sort of the point of the permits! Obviously that's too much work and expense for hobby diggers, but also means they shouldn't be doing it.

Video has gone. But I doubt it will poison anything. The only place that I know of with visible detriment to the environment is the outflow from Cae Coch Sulphur Mine which has a low pH.
Everywhere else seems to just promote a different flora and fauna, mostly rare lead-loving plants!

Just watched the same video in a different location with context of location, and in that edit it shows text on-screen that 20mins later the river was clear again, so I think is a storm in a teacup, Fortunately!!!

I haven't seen the video myself but if the mine water was neutral, then it sounds like it was iron-rich sediment that came out - iron dissolved in acidic water will precipitate out if the pH changes to less acidic so it's possible that's happened inside the mine. Possibly not too much of a problem if it was well diluted once in the river, but you have to wonder what else was in the water. For example, the water in Tilberthwaite Gill up in the lakes is lovely and clear but I've always wondered how much of that is down to the arsenopyrite in the mine dumps further up, ditto Coniston Gill though I think the water board monitor that one fairly closely...

Top lads keep up the good work I say , isn’t no differnt to a small constant release also as said above it removes the risk of a sudden outrush from the mine
Last edited: May 4, 2022

It is different from a small constant release - both will have negative impacts, but the impacts will be different.

Drink a pint after work every day and there might be some long term health impacts over a few years, but drink all that alcohol in one go and the consequences are very different.

This river is an ecosystem and anything that disrupts it will alter it and impact the things living in it. It's also antisocial - that orange water is ugly, nobody except the diggers will know why it's that colour, and nobody (including the diggers) will know if it's harmful. I wouldn't let my dog drink from a stream that colour.

ChrisJC said:
Video has gone. But I doubt it will poison anything. The only place that I know of with visible detriment to the environment is the outflow from Cae Coch Sulphur Mine which has a low pH.
Everywhere else seems to just promote a different flora and fauna, mostly rare lead-loving plants!
Click to expand...

The reason it promotes a different flora and fauna is because the environment is no longer hospitable to what was living in it before. That's one of the clearest examples of an environment being poisoned that I can imagine!

aricooperdavis said:
... ... Obviously that's too much work and expense for hobby diggers, but also means they shouldn't be doing it... ...
Click to expand...

It's probable people connected to this are browsing this thread but unable to comment themselves so let's tread with care. While I will never endorse anything cavalier or uncontrolled, the comment quoted could be interpreted as a general comment against people recreationally digging/draining adits if the water isn't tested (non-accidentally )
If that interpretation of your comment was correct? I think it would divide opinions here, especially since we're in mining section. Personally rather than advise against, I fall into the "if it's done carefully --> I'd buy them a beer" camp.


aricooperdavis said:
...The reason it promotes a different flora and fauna is because the environment is no longer hospitable to what was living in it before....
Click to expand...

Yes but sheep grazing promotes different flora to ungrazed land or historic deforestation lead to moorlands etc etc, You can argue that much of our landscape is man made. When it is damaged/poisoned is obvious when in extremis but there is a middle ground here and I'm not sure a small one-off release of water will inevitably lead to "damage"
Last edited: May 4, 2022

They're welcome to make an account, then they could clear up all the uncertainty for us!

It was an accident, accidents happen, as I said in my first post I think it's unlikely to have done lasting damage.

In the bit of my post you quoted I was indeed saying that I don't think people should recreationally and non-accidentally release large amounts of minewater into rivers. That's why I'm saying that such actions can harm ecosystems, because I care about those natural ecosystems.

For those who can no longer watch the video, here are some stills (that don't identify the people involved).

Edit: I think we're mostly on the same page, Cantclimbtom, I'm not saying it inevitably will lead to damage, I'm saying it shouldn't be done intentionally without considerable thought to whether it will.

For completeness.... it was claimed, that after 20 mins the river was completely clear again

I have drained a number of adits in the past, resulting in a similar orange outfall for a short duration. 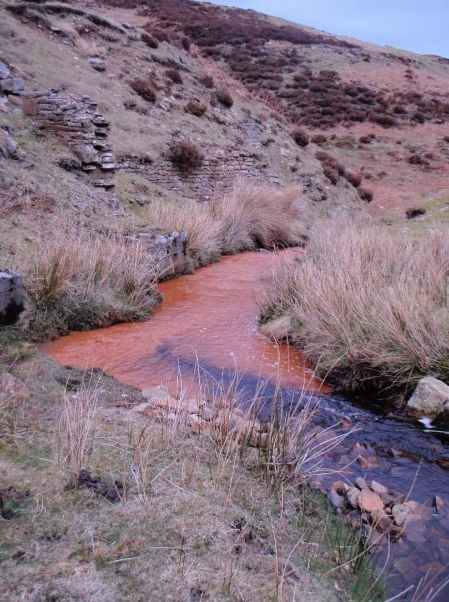 This one was about 15 years ago. I didn't think much about it at the time, but I certainly didn't stick around for it to clear (and the game keepers to arrive).

Would I do the same again? Yes, I think I would. If there are mine workings there to be (re)discovered, I'd drain it enough to get through. I might think about doing it on an evening though, so as not to attract so much attention!

click bait titles make it appear far worst than it actually is . I accept it’s far from ideal but if you ever want to find new things it has to happen . You could say digging inside caves and creating voids is unacceptable as you might ruin franks cabbage patch

Doing water managment is always therapeutic. We also turned this one into a water slide. 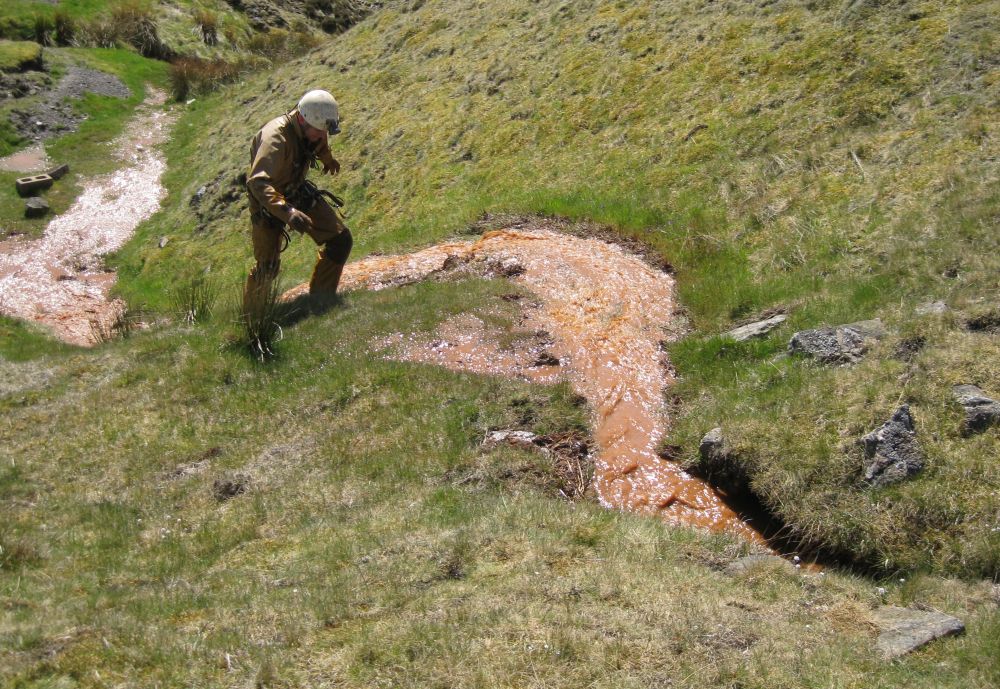 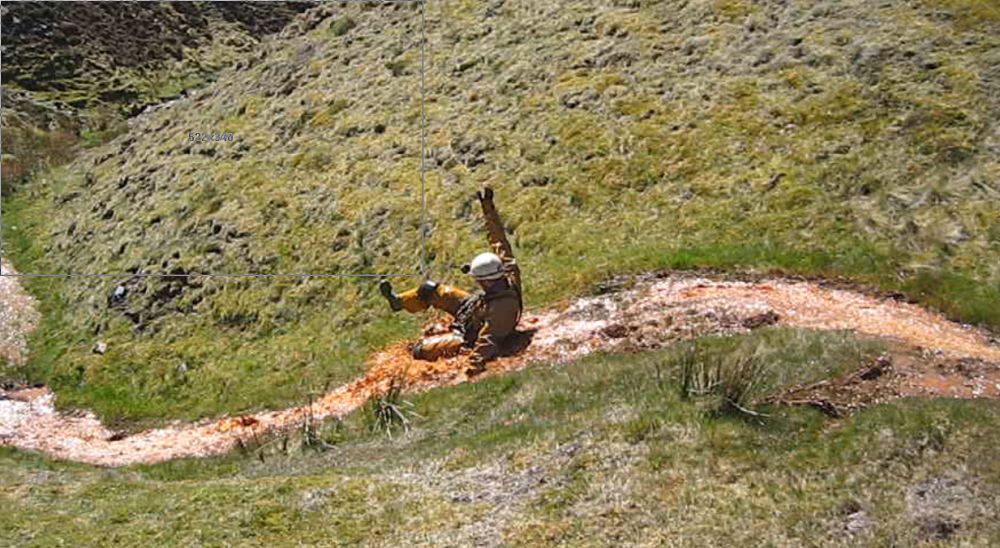