Pegasus said:
Ok you lot, this is a competition!
Click to expand...

We're keeping it at the top of the forum  :kiss2:

So a few weeks before lockdown saw me on a solo explore in a north wales spar mine, finding the entrance and setting my callout, off I went to explore the relatively large underground workings

After 20 minutes or so exploring a couple of chambers, my journey took me to an adit at the end of which broke into a window overlooking a deep open stope and lowe and behold I was not the only one there that day, looking down onto a ledge I was greeted with the sight of a sheep who had obviously stumbled over the edge and had fallen the 30or so meters onto this precarious position on the ledge along with his friend who was not quite so lucky.
After a few minutes of looking at him, I was able to conclude he was not in bad health and can't have been down there too long. Me being the animal lover I am, I knew I couldn't just leave him there to suffer alone. it was now just a matter of trying to access him and come up with a plan! 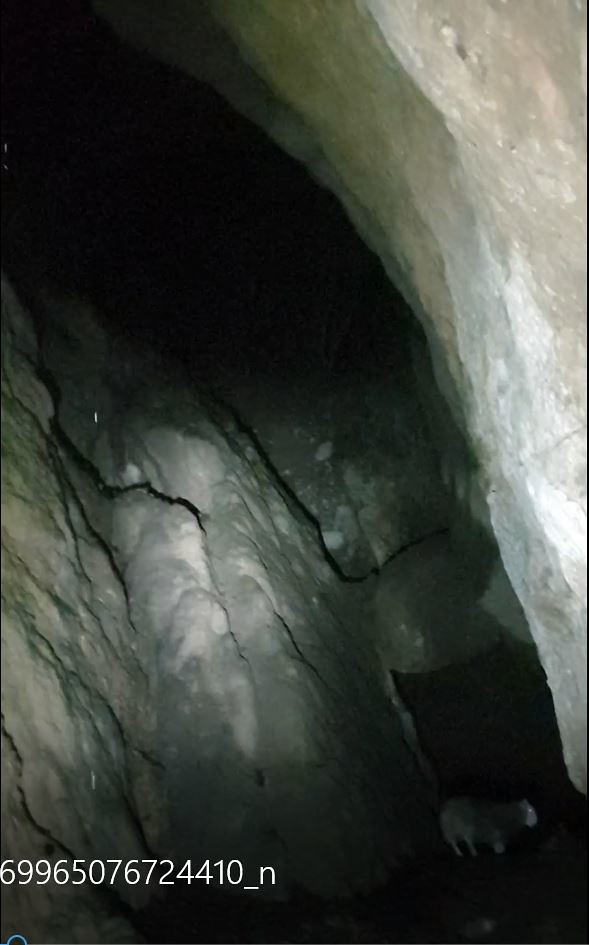 Carrying on through the mine underground I was able to drop a few levels down various ladders and make my way to a long chamber with daylight at the end. A small crawl leads to the level of the open stope where the sheep was stranded, unfortunately, the end of this crawl was the exact place where the second sheep had met his fate, so involved crawling over the now rotting body to access the ledge.
Now on the ledge, the sheep the was still alive was obviously very timid and nervous and with every step, I took forward the closer he went to the edge of the ledge, so rather than chasing him off the edge I decided to stay put, by the smell of his friend it was clear they had been there a few days and with no available food source there I decided my best option was to leave him behind some of my lunch and hopefully he would appreciate a couple of my smoked bacon and cheddar sausage rolls whilst I would head to the surface and come up with some game plan.

Upon returning to my vehicle I was able to contact a caver/mine explorer I knew lived locally who id only ever met online and was keen to come and rig a system to try and haul the sheep to safety as I knew I could not accomplish anything on my own he was still in work at the time but would come over as soon as he had finished.
A couple of hours passed as I waited for help to arrive and a few inquisitive locals who were walking their dog came up and asked what was going on as I was packing my kit bags with rope, slings and all the SRT bits I thought would be useful I had in the van with me, quite keen to do their bit to help they went about trying to track down the owner of said sheep. 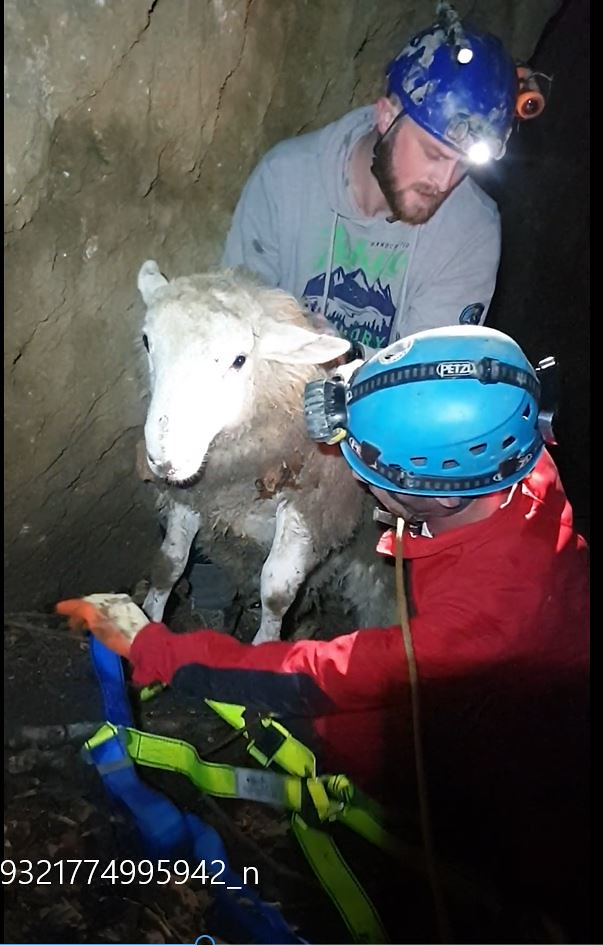 By now it was getting dark outside and help arrived along with the farmer, Together we decided to come up with a gameplan, One of us would abseil the stope onto the far side of the platform and the other two would go through the mine and to the other side, where the abseiler would chase the sheep into our direction where we could grab him and get him into a child's safety harness and haul him up to the top of the stope using a 1 to 1 system pulled by the farmers quad bike, 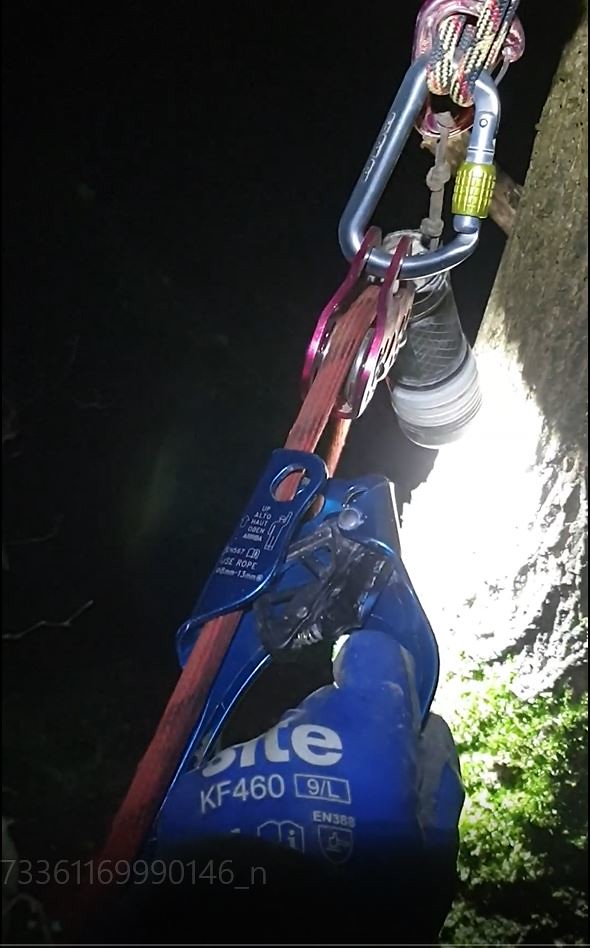 I'm glad to say this all worked flawlessly but we were not expecting him so have so much life in him whilst trying to get the harness on which took several attempts before getting it on.
and the sheep was returned to his flock alongside a very grateful farmer 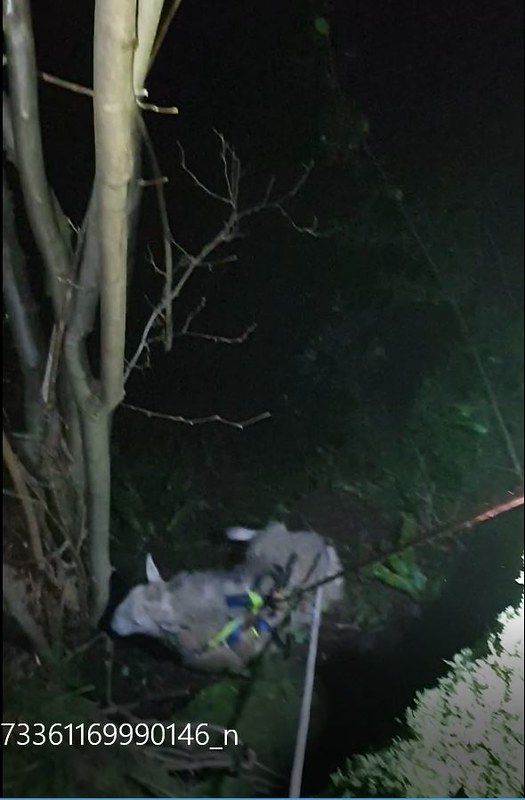 All in all, this was a good deed well done and a good excuse to meet up with a fellow caver for the first time.
I

Although it appears you have to post something on the new thread to make it show up on home page...

mikem said:
Although it appears you have to post something on the new thread to make it show up on home page...
Click to expand...

Its back on the home page
M

Yeah, it was more a message for mods to hopefully remember when they split a topic.

mikem said:
Yeah, it was more a message for mods to hopefully remember when they split a topic.
Click to expand...

Googlygaz doing good for caver farmer relations and saving a beast is cool so I withdraw my meagre entry.

Back on topic, here is my entry with a brief tale of a lot of hauling:

Despite growing up in Somerset and coming from a family with caving connections (my Grandmother's generation were Mendip cavers), I didn't start caving properly until I was at university in Durham. I soon discovered the joy of digging and so when I returned to Mendip and met Andy Sparrow in the pub in Cheddar and he asked what I did on a Wednesday night my fate was sealed.

Andy, with the Cheddar Caving Club had recently connected Bath Swallet to Rod's Pot and had started the project of connecting Rod's on to the next cave in the system, Drunkards Hole. They had initially started digging from Drunkards, but by the time I joined the team, the focus was from the Rod's Pot side.

Wednesday after Wednesday for over three years, we dug and we hauled bag after bag of sloppy mud. As the dig progressed, I acquired some conveyor belt matting from a nearby quarry to help prolong the life of the drag trays and bags, as well as saving considerable effort hauling. I can't calculate the mechanical advantage of this system, but suffice to say, the efficiencies were significant and far outweighed the effort of lugging the stuff in, in the first place.

After a number of trips to said quarry to top up on conveyor belt, I became known as Posh Pete because I used rubber

If hauling bags along constricted passages wasn't enough, the spoil heap grew too until we were hauling 30 feet (possible exaggeration here, but it was a long way!) to get the bags to the top! Again, no fancy systems to gain a mechanical advantage, a simple 1:1 haul over a pulley above; one caver above and one below. Just try to keep the bags light and try to avoid filling them with too many holes before they get half way up and spill the contents over whoever is unfortunate enough to be at the bottom.

Right when the hauling seemed untenable, a breakthrough provided more stacking space near the end, but after that became full, progress became impossible from the Rod's end. A renewed attempt from the Drunkards side saw more progress and a small extension, with a promising lead. Unfortunately access to the extension is for the thin and fit only, so enthusiasm never really took off at this site...

So if anyone really likes hauling, there's a project there for the taking 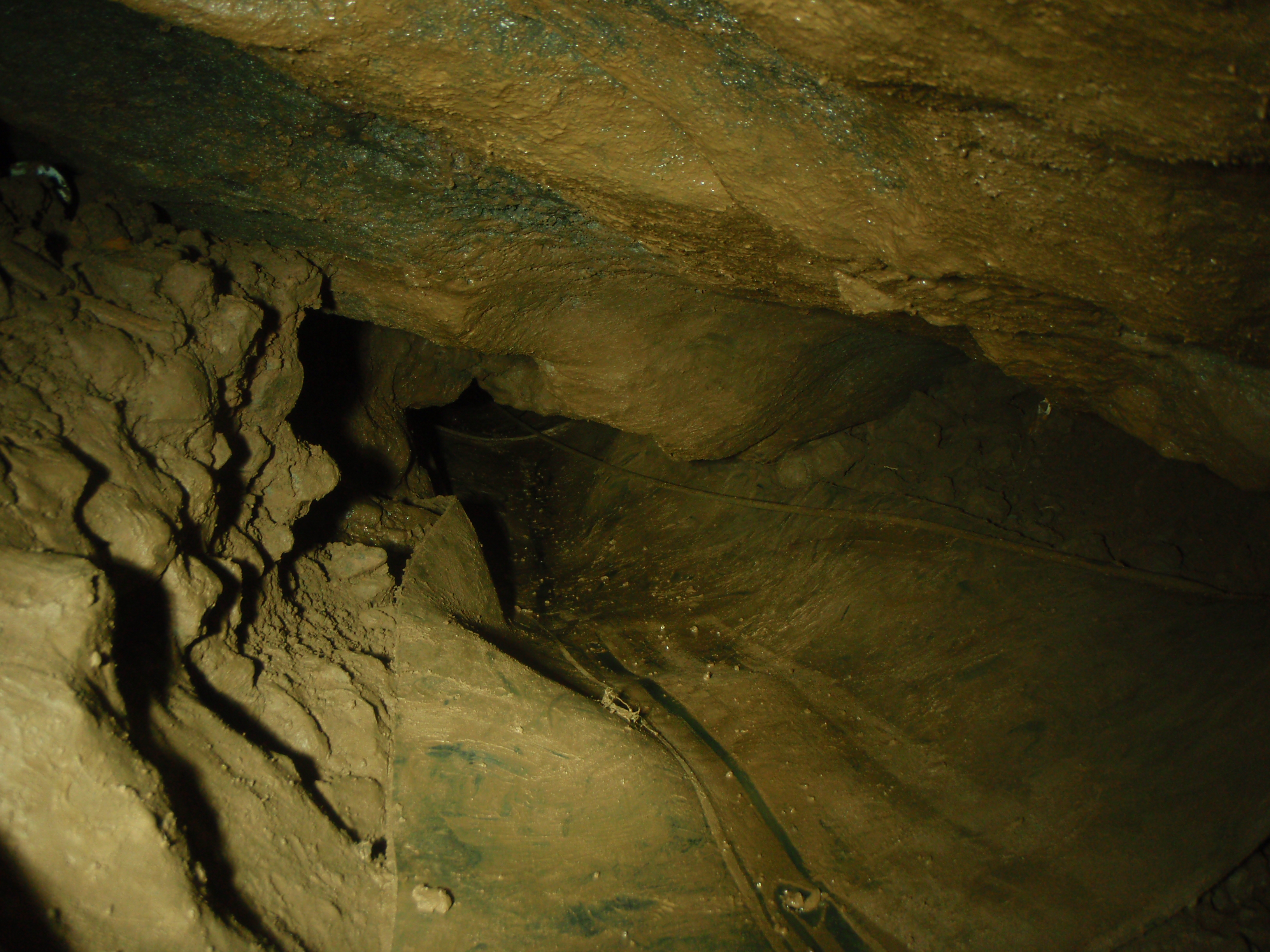 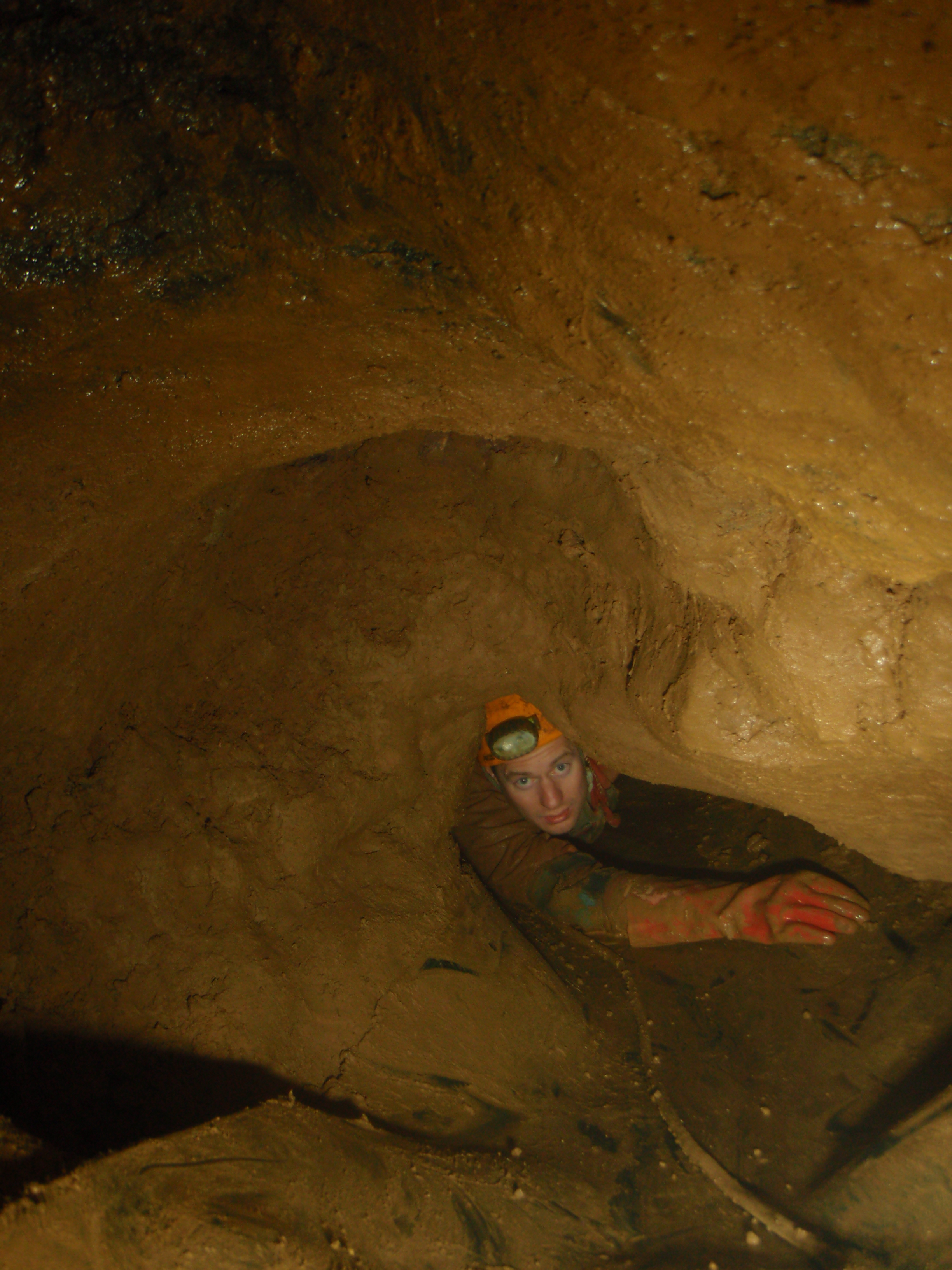 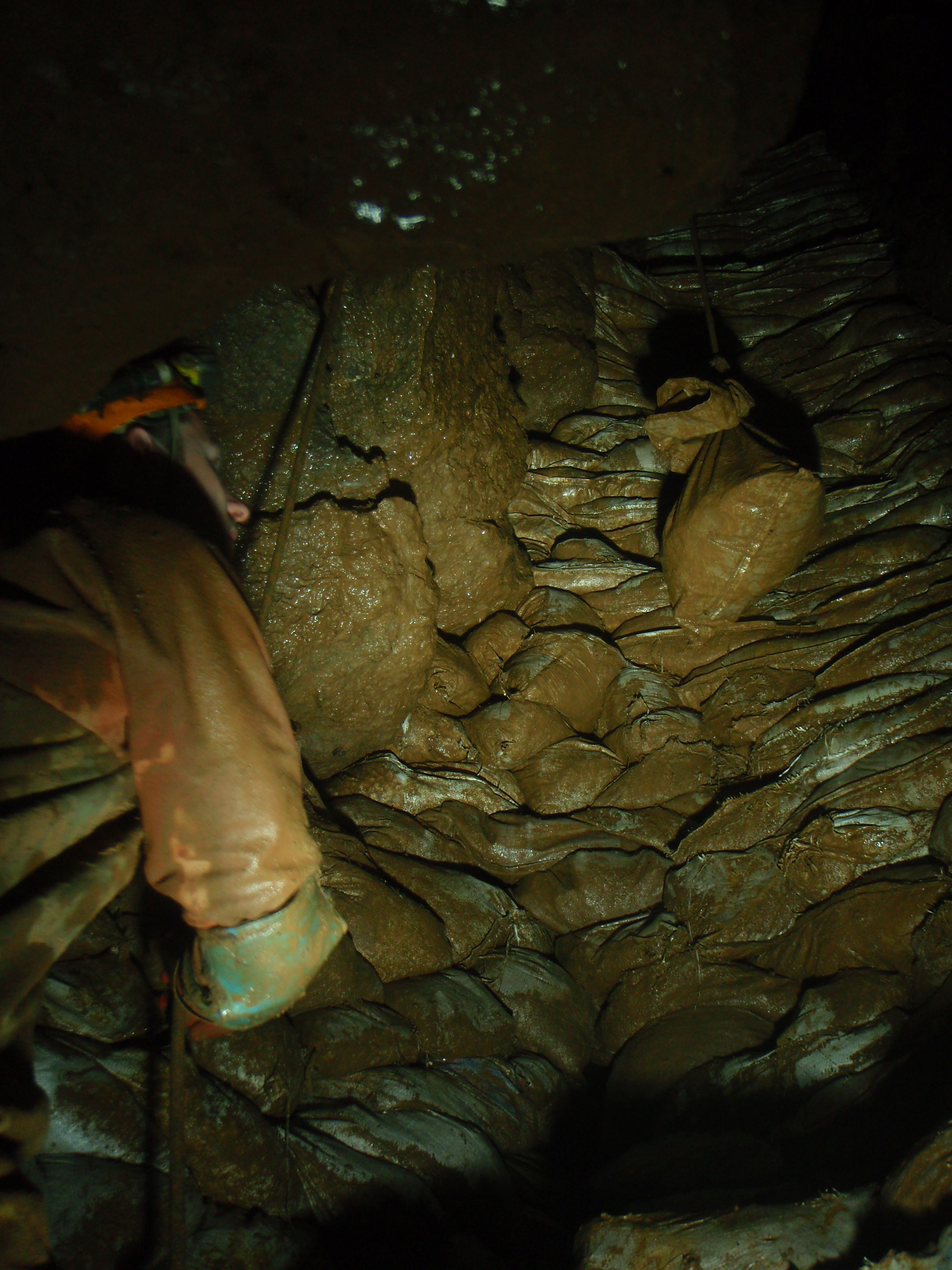 Ian Ball said:
Googlygaz doing good for caver farmer relations and saving a beast is cool so I withdraw my meagre entry.
Click to expand...

mikem said:
Yeah, it was more a message for mods to hopefully remember when they split a topic.
Click to expand...

Which is one more time than me!  good effort

Staff member
Thank you, as ever to all those who entered this competition and to the kind donation of the prize!

Thanks even to the cavers who hijacked the thread to post about hauling systems  :spank:- now split and to be found here

1) Christine - watch out for those bubbles

3) Aricooperdavis - Mission Impossible (watch the video, will make you smile  )

Thank you so much that is amazing, Buttered Badgers & Uk caving this is much appreciated and a proper pick me up from the lockdown gloom


Pegasus said:
Thank you, as ever to all those who entered this competition and to the kind donation of the prize!

Thanks even to the cavers who hijacked the thread to post about hauling systems  :spank:- now split and to be found here

1) Christine - watch out for those bubbles

3) Aricooperdavis - Mission Impossible (watch the video, will make you smile  )

Not only a good hauling story, but also an excellent PR exercise