Win a copy of the excellent Karst, Caves & People!!

Many thanks Frog2. If this post has an avatar thingy, it'll have worked.

This is just a picture of yours truly looking especially handsome (?) after a 4 hour sump facial in the Dales

Blimey - it did work!

Pitlamp said:
Blimey - it did work!
Click to expand...

Pitlamp said:
Blimey - it did work!
Click to expand...

chunky said:
I am fortunate to already have a copy of Nadja's wonderful book and can thoroughly recommend owning a copy!

My avatar is very descriptive. Not only does it let you know which caving club I belong to but it even helps you identify me in a crowd
Click to expand...

I see your work in there, fab shots as always

Pitlamp said:
Many thanks Frog2. If this post has an avatar thingy, it'll have worked.

This is just a picture of yours truly looking especially handsome (?) after a 4 hour sump facial in the Dales
Click to expand...

my main surprise is that that doesn't appear to be Malham?!

Sore subject; this winter's Malham season has been completely wiped out by the obvious circumstances.

I tried to upload an avatar of me looking dashingly handsome, in the teeth of a gale. Instead it came out as a picture of some old bloke.

My avatar picture was taken by my Russian mate (Professor) Ilya Kuprov as I was just about to descend the first pitch of the Croesor - Rhosydd through trip, back in 2008.

The trip was a relative disaster and resulted in a rescue of half the group. I shan't go into too much detail, but suffice to say the problems would have been avoided if the trip leader had (a) known where the exit was. Or (b) accepted that he couldn't find the exit and agree to turn back before it was too late and half the group were cold and exhausted. As it was, two of us (myself and Ilya) returned the way we had come, to get one of the guys from the hut to come and collect the others from a prominent point "very close" to the exit. Unfortunately, when we got out it was dark, thick fog and everyone at the hut was totally pissed and our only option to avoid a mountain rescue as well was to call for assistance. I joined the rescue team to collect the stranded guys and everyone got out under their own steam, with a dose of energy gel and some spare batteries.

After the trip, the "leader" admitted that he was relying on someone else to navigate. When that person decided to go fell running instead of caving at the last minute, the "leader" was too embarrassed to say he didn't know the way and carried on anyway hoping to recognise the exit when he got there. The icing on the cake was when he said it was always going to have resulted in a rescue as he had no idea of the way back across the hill even if we had got out!

The whole debacle was incredibly embarrassing and needless to say stories started circulating online; after a tip off, I was compelled to sign up to AditNow to explain what had actually happened and to take responsibility for my own decisions and actions. At the time, I used my most recent underground picture as my Avatar on AN and it has since become my avatar everywhere else online.

I am still friends with the trip "leader", but I have never been underground with him since. I would like to think I am also a little more wise now and always make sure I know where I am going, even if someone else has been before and is "leading" the trip.

I struggle to find photos of myself, i'm normally behind the camera.....

But i like this one - taken in the far reaches of Cueva del Gandara in Cantabria, Spain on a three day camping trip with great company, back in the days when we could......

It was a great trip, we struggled in with huge bags, saw some amazing bits of passage, and were rudely awoken from our slumbers by a dozen of the Wessex CC enjoying a 10km through trip in the system. 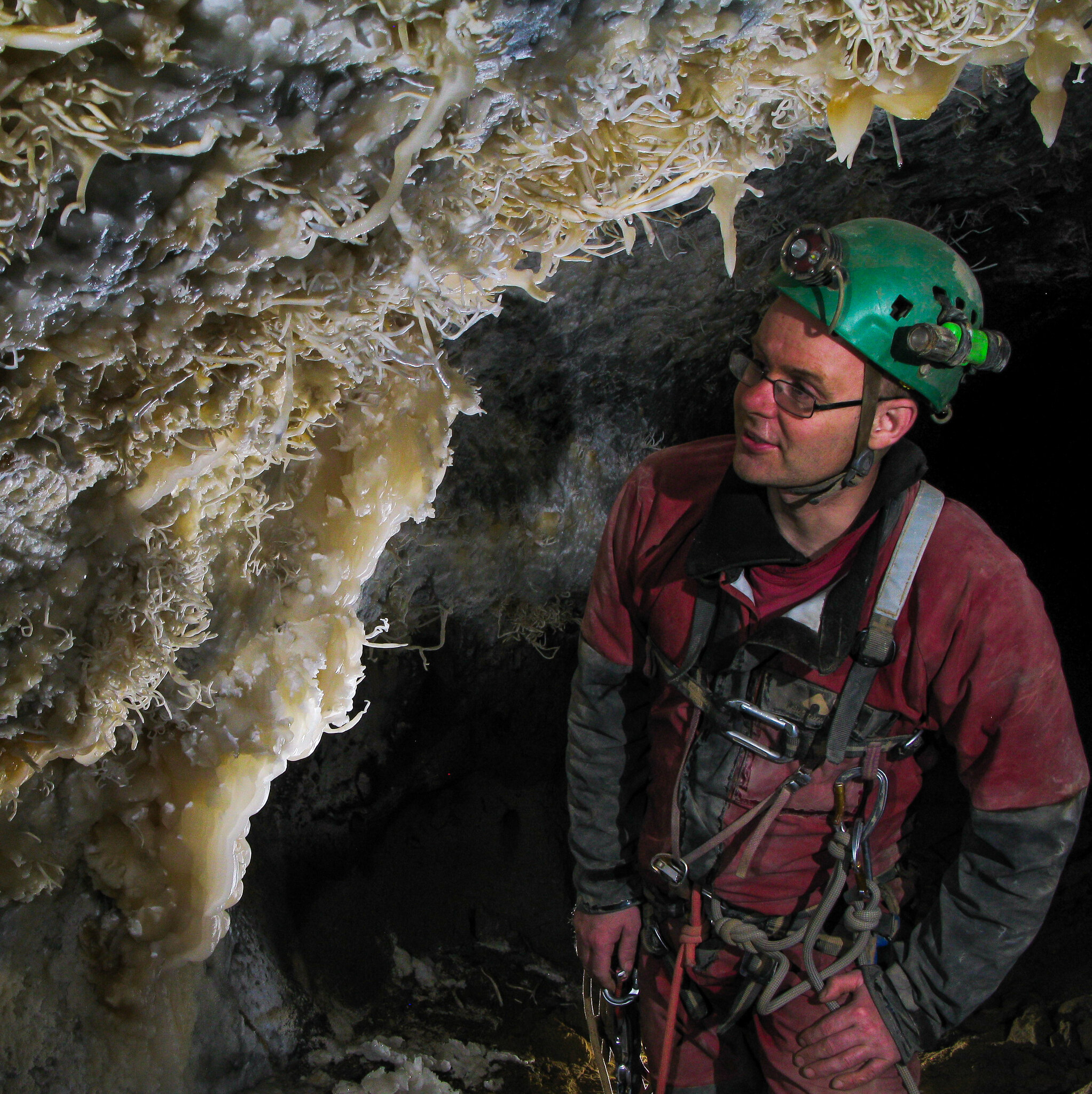 My avatar is not directly cave-related, although it is limestone (from that mega-caving area, Portland).

It's loosely inspired by the Lewis chess men and reflects my other limestone-related hobby, stone-carving.
Not exactly a self-portrait, but I'm rather fond of the little fella.

My avatar photo was taken not far in to the Pene Blanque entrance in the Reseau Felix Trombe system. This was one of the many scout trips we made before committing to the massive 14 hour through trip.  This picture I believe was actually a self portrait the and long exposure timer and quickly got into position for the long exposure shot, being careful not to bang my head of course. Zoomed in you can see my usual problem of just not being able to stay as still as the Victorians could!

I chose it simply because it reminds me of the fun times on that trip and I thought I kind of looked cool, it's well out of date now though.

My avatar is the peehole near Great Relief Passage in Giants. That's better

OK, I'll play and finally add an avatar picture...
The piccie is from a couple of years or so ago while ago when experimenting with real Super8 film as opposed to digital stuff in Goatchurch.  Obviously in the monster get up you can't see what you're doing which makes it much more fun...  Props courtesy of eBay, Tesco, and a local charity shop.
Super 8 film is a fantastic way to extend faffing about times, has a wonderfully low ISO so great (not) for dark dank caves, is quite grainy, lasts just over 3 minutes a reel, and a good way to empty your wallet at the same time - works out at about ?20 a minute to shoot, develop and scan. They still make cine film, so don't know why it's not more popular, or why I haven't done as much cine stuff as I'd like since.  :-\

How can the unlucky non-winners get copies of this book?

Joe Duxbury said:
How can the unlucky non-winners get copies of this book?
Click to expand...

I'll find out if you enter

Here is my latest avatar:

My avatar picture was taken surveying a cave in China with a rather impressive 250 m entrance shaft, which features in the video below (at 2:02 - note the inspired commentary by Pegasus). I seem to remember there was a flash gun shoved into the waistband of my trousers because the photographer couldn't find a suitable location on the ground!

About 5 minutes after the photo was taken we returned to the bottom of the entrance shaft to find that a red panda had unfortunately taken the quick way down.

MarkS said:
My avatar picture was taken surveying a cave in China with a rather impressive 250 m entrance shaft, which features in the video below (at 2:02 - note the inspired commentary by Pegasus). I seem to remember there was a flash gun shoved into the waistband of my trousers because the photographer couldn't find a suitable location on the ground!

About 5 minutes after the photo was taken we returned to the bottom of the entrance shaft to find that a red panda had unfortunately taken the quick way down.